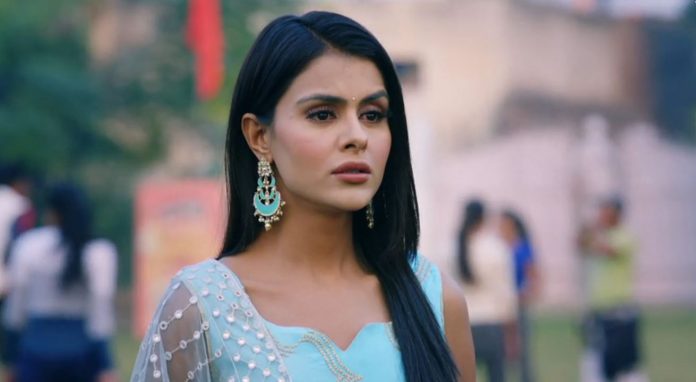 Udaariyaan 11th November 2021 Written Update Tejo’s answer Rupy informs Tejo that they have found an alliance for her. Within no time, Khushbeer asks her to marry Angad, who will be the perfect man for her. Tejo is left in shocked. Fateh meets Tejo and tells her that he is really happy for her, that she is moving on in her life. He tells that her family, her parents are helping her, and also her new friend Angad Maan. Tejo is speechless. She meets Angad at the academy, and avoids him, after knowing that their alliance talks are going on. She feels odd to face him.

Though Angad doesn’t know anything about the alliance yet. He stops her and holds her hand. He asks her why is she turning away and leaving, when he is sure that she is hiding something from him. Tejo gets triggered to answer him. What will be Tejo’s answer? Keep reading.

Next day, Rupy and Khushbeer meet Tejo for a talk. They tell that they also want to work out and make a good physique. They ask for Angad. Tejo tells that Angad doesn’t come everyday. She asks them to go home. They behave weird. She asks what’s the matter. Rupy tells her that they found a good match for her. She is shocked by their rushing move. Khushbeer comes to the point and asks her to marry Angad.

Rupy and Khushbeer share their findings about Angad. They tell that Angd is a great person. Tejo asks them how can they think about Angad, who is their investor. Rupy and Khushbeer tell that Angad is a good person, bachelor, young and rich also. They ask what is the problem. She tells that they don’t know what Angad wants. She tells what she wants. She explains that she got hurt twice in her life by getting into two wrong relations. She knows their concern.

She tells that she married Fateh for everyone’s happiness, but ended up with a divorce. She asks them not to make marriage any kid’s play. She tells that it will be her loss if she fails again. She asks them to consider her feelings. She doesn’t want to test herself more. She wants to take her life’s decisions herself. She asks them to spare her from their concern. She requests them to understand that she isn’t ready for any new relation. She doesn’t want to agree to everything they say. Rupy asks her to take time to thik, but not refuse. Khushbeer also wants her to consider Angad once.

Jasmin comes to her room, and finds Fateh behaving strange. She asks him is he planning a surprise for her. He asks her to have patience. She shows her Kaleerein. She tells that she will be wearing that in her marriage. She asks him to go for card distribution. She reminds that just 9 days are left. Khushbeer tells that its his wish that Tejo’s marriage gets fixed before Fateh’s marriage. Tejo tells that marriage isn’t in her fate. She asks him not to force her. She tells that she can live without marriage, she has the academy, family, college and many things to do in life. She sternly sticks to her decision.

Rupy and Khushbeer tell her that they have seen Angad making her smile and taking care of her, he is very protective and true just like her. They tell her that she can see it clearly that Angad likes her. Tejo asks them not to talk to Angad, for her sake. Khushbeer realizes that Tejo’s refusal will ruin down Fateh, which he can’t let happen. He still thinks for his son’s destruction close if he marries Jasmin. Tejo doesn’t listen at all. Fateh tells that he doesn’t want anyone to judge Jasmin and blame her for his divorce. He adds that he doesn’t want to invite his friends. Jasmin agrees with his decision. She tells that she has a lot of work to do.

Fateh offers her help. She asks him to go to Sandhu house. She thinks Tejo won’t be at home at this time. Angad discusses work with Rajat. Angad sees Tejo and goes to greet. Tejo judges him and thinks he has told something to Khushbeer and Rupy. Tejo taunts Angad for talking simple. Angad asks her if he has made any mistake. He asks Tejo to come to office. She asks him when did he meet Khushbeer and Rupy. He tells that he didn’t meet them after Diwali. She asks if they came to meet. He tells that he can meet them if they want, he can make tea for them. She asks him to get serious. She questions him why does he come to the academy every day when he has other companies. Angad tells that he likes to come to the academy.

Angad gets dramatic and questions her to know the secret she is hiding. Tejo asks him to handle the work, while she goes home. He holds her hand. He asks her to tell him what’s bothering him. Tejo doesn’t say anything. He tells that he will get his answers on his own. She doesn’t think it can happen.

Fateh comes to Sandhu house for Jasmin’s work, leaving Satti angered. Tejo reaches home. She finds Satti angry. She asks the reason. Bebe and Satti tell her that Fateh has come home to take Jasmin’s stuff. Tejo goes to her room and meets Fateh. She helps him out with the long list. She asks him if he has something to say. He tells that he wanted to say sorry to her, that he has hurt her heart a lot. He is ready for any punishment for his mistakes. He asks her to suggest a way to lessen her pain. She doesn’t think he needs to do anything. She advises him to forget everything, because she also got over the past.

She reminds that he got what he actually wanted. She asks him to make a good start. He didn’t imagine he will see this day. She tells that life changes everything, people and even relations and emotions. Jasmin asks Sweety to come in the marriage functions. Sweety apologizes that she can’t come, and even their friends won’t come. Jasmin thinks she is joking. She asks the reason. Tejo feels its her mistake to accept any gift from Jasmin, forgetting that Jasmin can ask for it again. She tells that she will buy a new one for Jasmin. Fateh tells that he will explain Jasmin and buy a new one for her.

He doesn’t want Jasmin to fight anyone. Sweety tells Jasmin that her family isn’t allowing her to attend the marriage, her family is scared that she can become like Jasmin if she stays along. She mentions that Jasmin is considered wrong by everyone. Jasmin angrily throws her out and shows her selfish side. Sweety realizes that Jasmin is really insane. Tejo asks Fateh why doesn’t he look happy. Fateh tells that the elders aren’t blessing him. Jasmin gets mad that both the families aren’t attending the marriage and creating hurdles. She determines to get married some how. Fateh tells Tejo that they have no friendship, he doesn’t need to share his problems. He is glad that she is moving on with her parents and Angad’s help. Tejo is left in tears once again. Stay tuned.

Reviewed Rating for Udaariyaan 11th November 2021 Written Update Tejo’s answer: 5/5 This rating is solely based on the opinion of the writer. You may post your own take on the show in the comment section below.