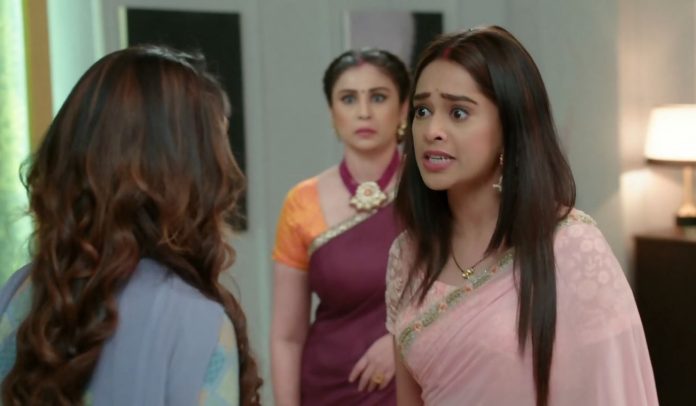 Kumkum Bhagya 12th November 2021 Written Update Prachi slaps Rhea Prachi is left alone by his numerous allegations and tears. Ranbir leaves for home. He is unable to tolerate Prachi’s deceive. Both Ranbir and Prachi cry in pain. Their sweet love story comes to an end because of Rhea. Prachi feels Ranbir has cheated her by alleging such dirty things. Siddharth gets the aid done by the hotel staff doctor. He wonders how did Prachi and he got locked in the hotel room. He asks the manager to help him with the cctv footage. Aaliya keeps an eye on Siddharth. She is afraid that her name can get known. Rhea reaches home with fake tears. She hugs Pallavi. She tells that Siddharth and Prachi have an affair.

She adds that Pragya ruined Abhi and his family, while Prachi destructed Ranbir and his family. Prachi slaps her in rage. Pallavi yells at Prachi seeing this. She asks Prachi to get out of the house. Prachi gets thrown out of the Kohli house. Will Siddharth prove Prachi and his innocence? Keep reading here for a full update.

Rhea tells Pallavi that Ranbir had seen Prachi and Siddharth in a compromising position, he angrily broke his relation with Prachi. She also wants to break her relation with Siddharth. Prachi arrives home and faces Pallavi and Rhea, who both seem to have lost their minds and manners. They insult Prachi for having an affair with Siddharth. Rhea asks Prachi how dare she ruin her family. She asks Prachi to get out. Prachi doesn’t suspect Rhea, and defends herself. She asks Rhea to believe her sister.

Rhea calls her a Sautan. She tells that Prachi can never be a good sister for her. She adds that Prachi has failed in keeping all the relations. Prachi tells that she can never imagine ruining Rhea’s life. She regrets that she couldn’t stay with Rhea. She wants to live her life with Rhea. She asks Rhea not to doubt her. Prachi’s true emotions don’t touch Rhea’s heart. Rhea accuses her for hurting her and giving her tears. She tells that Prachi first snatched Ranbir and now her husband Siddharth. She asks Prachi the reason for her hatred.

She blames Prachi for destroying everything, after claiming to love her. She tells that Prachi had so much poison in her heart. She asks if Pragya taught her to ruin someone’s family. She accuses Pragya for ruining Abhi’s house. Prachi angrily slaps Rhea when she accuses Pragya. Pallavi asks Prachi how dare she slap Rhea. Prachi asks Rhea not to think disgusting things about Pragya. She can’t tolerate anything wrong about her mother. She asks Rhea to calm her anger and think well. She tells Pallavi that she isn’t greedy to snatch anyone’s happiness. She adds that Ranbir and Rhea are misunderstanding her.

Pallavi asks Prachi to take her stuff and get out of the house. Ranbir feels cheated. He thinks he always got cheated by Prachi and Siddharth. He doesn’t know how will he live without Prachi. Dida asks Pallavi what’s the matter. Pallavi tells Dida that Prachi lost her character, she failed to become a good wife, she cheated Ranbir. She tells Dida how Prachi and Siddharth have cheated Ranbir and Rhea. Prachi feels hurt by the dirty accusation. Pallavi also raises an objection on Pragya’s upbringing. Prachi asks her not to say a word against Pragya. Rhea tells that they have no relations now.

She asks Prachi to leave the house on her own. Dida understands Rhea’s plotting. She stops Rhea from hurting Prachi. She defends Prachi. Rhea tells that Ranbir has seen Prachi and Siddharth sleeping on the same bed. She asks Dida to decide if she will believe Prachi or Ranbir. Dida tells that she believes Prachi. Prachi tries to clarify. Rhea doesn’t let her say any truth. She asks Prachi to tell Dida if she was with Siddharth in the same room. Prachi accepts that she was with Siddharth. Pallavi doesn’t want to hear anything more. Rhea asks Prachi to go away. She sheds tears to get sympathy from Pallavi. Rhea consoles her. Vikram arrives home. He asks them the matter.

Pallavi asks him to call a pandit. Siddharth checks the cctv footage. He gets to see Aaliya. Aaliya keeps a watch on him. Prachi goes to her room to pack her bags. She regrets whatever happened. She misses Ranbir. She didn’t think Ranbir will hurt her so much. She cries that he has assassinated her character and ruined her esteem. She can’t live without her esteem. Ranbir turns up home. Pallavi sympathizes with him. She tells that she supports his decision to break his marriage with Prachi. She asks Ranbir to tell Prachi to get out of this house. Ranbir meets Prachi in their room. He stops her from leaving. Prachi hugs him and cries. Prachi imagines their moment. Ranbir wants Prachi to leave from his life. Prachi leaves the house, while Pallavi ends her relations with Siddharth.

Reviewed Rating for Kumkum Bhagya 12th November 2021 Written Update Prachi slaps Rhea: 2/5 This rating is solely based on the opinion of the writer. You may post your own take on the show in the comment section below.