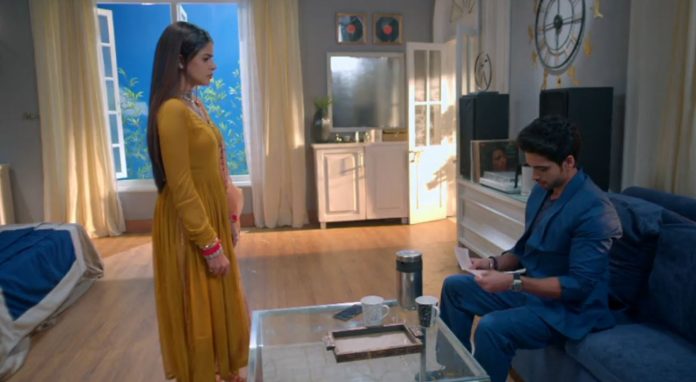 Thapki Pyaar Ki 12th November 2021 Written Update Thapki’s move Purab tells Thapki that technically they are married to each other and live in the same room. Thapki informs Purab that there is a worth of marriage. Purab says that these many reasons are enough for him and whatever happens between them should not hamper their families. Purab says that she is good with his family and he is good with her family. He adds that for the sake of their families they have to be in this marriage. Purab warns Thapki to stop speaking about returning his money and favors. Thapki becomes sad and Purab tells her to go and meet Jaya.

Thapki thanks God for giving her family a caring son-in-law like Purab. But she is confused that she cannot understand him as a husband. Vinod and Dadi are happy that Thapki is proved innocent. Dadi is surprised that Purab supported his wife. She feels that Purab and Thapki’s relationship will slowly become deep. Jaya advises Thapki to dutifully manage her married life with Purab. She says that everything will be resolved gradually between them. Paresh says that marriages are like that only and he is also tolerating Sudha.

Sudha comes there and questions Paresh why did he stop speaking and demands to know it or else nobody will get food. Paresh praises Sudha falsely and changes the topic. Thapki asks Paresh if she can see the cheque given by Purab. Paresh shows her the cheque and Thapki clicks a picture as a remembrance of Purab’s help. Sudha snatches the cheque from Thapki’s hands and tells that she will keep it. Paresh asks Sudha to return it but Sudha suggests doing Jaya’s operation in a cheap hospital and keep the remaining cash. Paresh is angry with Sudha for being greedy and keeps the cheque in his pocket.

Sapna tells Priyanka that she has reaped a seed of doubt in Veena’s mind. Sapna is confident that it will certainly create drama in Veena’s life. Sudha calls Priyanka and tells her that Thapki is married in a miserly family. Sudha demands her five lakhs from Priyanka as Purab has been showering them with lakhs of rupees. Priyanka refuses to give the money and cuts the call. She informs Sapna that Purab is distributing lakhs of rupees at Thapki’s maternal home. Priyanka tells Sapna that time has come to call Sagar.

Sapna decides to again provoke Veena. Veena is extremely disturbed by Sapna’s words and calls Purab. Purab is busy speaking with Jaya’s doctor. Sapna does the drama of getting back pain in front of Veena. She calls Sagar to help her but he asks her to do it on her own and leaves. Sapna tells Veena that today’s generation is very arrogant and her son is also getting out of her hands. Sapna informs Veena that Purab has given a two lakh rupee cheque to Thapki’s uncle. Veena asks Sapna when it happened and Sapna says that she doesn’t know what is happening in Purab’s life.

Sapna brainwashes Veena’s mind. Thapki decides to give Purab her area’s famous filter coffee. She packs a kettle full of coffee for him. Veena argues with Purab over helping Thapki’s family. Purab informs Veena that he has given money to Thapki’s family for a reason and not for enjoyment. He says that they needed a lot of money for Jaya’s surgery so he helped them. Veena tells Purab that he doesn’t care for her but is very concerned about Thapki’s mother. Veena tells Purab that girls like Thapki try to get money from their rich husbands. Thapki listens to this and gets shocked.

Purab tells that he is not a kid and can understand but Veena tells him that his overconfidence may destroy him. Purab says that Veena was the one who chose Thapki for him so she is responsible for it. Veena and Purab go on arguing. Purab humiliates Veena and leaves. Sargam prepares to go out and asks Purab how she is looking. Purab praises Sargam’s outfit and she informs him that Thapki did the embroidery on it. Purab clicks her picture. Thapki is crying alone in one corner of the house remembering Veena’s words.

Thapki feels sad because Veena thinks that she is after Purab’s money. Thapki feels that she considers Veena her guru and that is why cannot remove the bangle given by her. Thapki becomes very emotional and says that she is not after Purab’s money. Thapki calls Paresh and says that she wants to take back what is not theirs. Vinod tells Veena that the video matter has been solved then why is she sad now. Veena tells that she is scared of her and Purab’s deteriorating relationship. Vinod tells Veena that Thapki is the right choice for Purab and the house.

Veena informs Vinod that one day his and Purab’s soft-heartedness will destroy their house. Purab drinks the filter coffee brought by Thapki and enjoys it. Purab tells Thapki that it is a good surprise and now he will leave his regular cappuccino and drink filter coffee. Purab offers Thapki coffee and she gives him his cheque. Purab thinks that Thapki is giving him the coffee maker’s address but is shocked to find the cheque given to Jaya. Purab asks Thapki about it and she tells him that it is a lesson for her that one should never have more hopes in anybody.

Thapki tells Purab that she will earn her own money and do Jaya’s operation. Purab asks her to take the money and give it back to her uncle. Thapki is adamant and refuses to take it. Purab asks Thapki if anyone said anything to her. Thapki remembers Veena’s words. How will Thapki manage such a huge amount on her own? Will Purab explain his side of the story and sort everything out? Keep reading.

Reviewed Rating for Thapki Pyaar Ki 12th November 2021 Written Update: 4/5 This rating is solely based on the opinion of the writer. You may post your own take on the show in the comment section below.