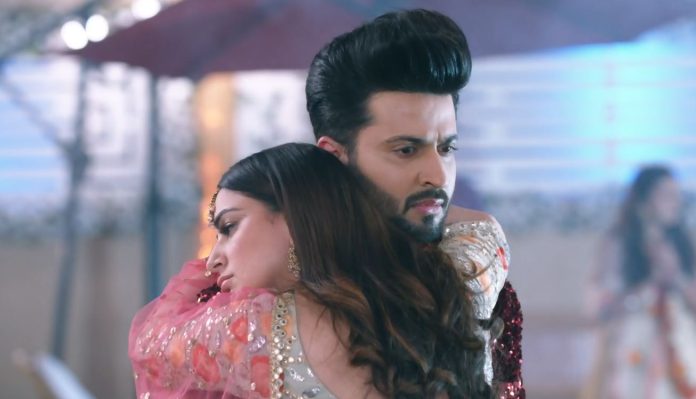 Kundali Bhagya 15th November 2021 Preview Written Update Preeta tells Karan that life is short to keep annoyances in hearts, they must come up clean about any matter bothering them rather them holding it in their hearts for a long time. She asks Karan to think what will happen in their future, they should not have any regret when they move on in their lives. She tells him that he shouldn’t have complains and sorrow, they never know what happens the next day. She explains that when they move on, they shouldn’t think of the day from the past that they could have lived well and happily together, they loved each other and could give all their love to each other, but they didn’t live it to the fullest because of their annoyances. She asks Karan to live the moment, rather than thinking of this day later.

Preeta hugs Karan. Sonakshi watches them from far, and realizes that Preeta has foiled her plan. She loses her cool seeing them. All her efforts to steal the dress and create a misunderstanding in Karan’s mind, fails down because of Preeta’s sweetness. What will Sonakshi do next? Will she put Pihu in danger to create a rift between Karan and Preeta? Keep reading.

Earlier in Kundali Bhagya, Sonakshi meets Pihu. She tells Pihu that Preeta likes her dress. Pihu tells that Rakhi asked her to change the dress. Sonakshi asks her to light the fire crackers, wearing the same dress. She asks Pihu to promise that she won’t reveal her name. Pihu promises her. She goes to burn some crackers. Mahesh is happy to be with his sons. He tells that he has many emotions connected with his sons. Bani calls him foolish. Kareena feels Kritika’s sorrow. Kritika is really heartbroken. Kareena can’t see her daughter so upset. She wishes that happiness enters Kritika’s life soon. Karan and Rishabh assure that they will take care of Kritika. Kareena wishes that their loving family stays away from everyone’s bad sight. Sonakshi reaches there to cast her bad sight at them.

Sonakshi asks Pihu to tell everyone that Preeta called her outside. Pihu tells the family that she is going out to Preeta. Sonakshi tells them that Pihu is lying to go outside. She adds that she will go along with Pihu and keep an eye on her. Kareena tells that they will burn the shagun fire crackers. The entire family goes out. Sameer and Shrishti get into an argument again. He apologizes to her. He asks her not to avoid him. She tells that she doesn’t like to not talk to him, but she has no option. He tells that its not necessary to fight always. She doesn’t want to see his attitude.

She tells him that she just wanted his attention. He replies that he was so worried that she was avoiding him since the morning. She hugs him and apologizes. Sameer gets delighted with her gesture. Shrishti and Sameer get into a romantic moment. She tells sorry to him that she has to go home for the puja. Sameer asks her to stay back for some time. She doesn’t listen. Pihu tells Preeta that she has fire crackers with her. Sonakshi asks Preeta not to worry for Pihu. Preeta asks Pihu to make sure that she doesn’t burn it.

Sonakshi asks Pihu to give her the crackers and keep the other ones. Preeta finds Karan upset with her. Karan tells that he is upset. Preeta asks him not to be upset. Rishabh takes Pihu with him. Preeta tells Karan that they shall not regret that they didn’t live the day by loving each other, by keeping the annoyance. Karan asks her not to talk such emotional things, else he will get more upset. She hugs him and melts all of his annoyance. Sonakshi fumes in jealousy on seeing them hugging. They share a romantic moment. Sonakshi uses Pihu. She burns some sound crackers and throws towards Pihu to scare her.

Pihu shouts for help. Her clothes catch fire. The family runs to save Pihu. Sonakshi tells that Pihu got scared and fainted down. She asks them to call the doctor. The Luthras attend Pihu. The doctor treats Pihu’s burn. Kareena tells that Rakhi is with Mahesh. The doctor tells the family that Pihu is totally fine. He asks them not to worry about brave Pihu. Preeta cries for Pihu. She asks the doctor to tell them the reason for Pihu’s fainting. He asks her to trust him, she is totally fine. Sonakshi tells that they can get some tests done. Doctor asks her if she is Pihu’s mum.

Rishabh tells that Preeta is Pihu’s mum. He reasons out that Pihu fainted because of panicking. Rakhi asks Pihu why didn’t she change the dress. Pihu tells that Preeta told her that the dress is nice, she shouldn’t change it. Preeta tells that she didn’t tell anything. Sonakshi doesn’t let Preeta say. She shows her fake burn mark to them that she saved Pihu from the fire. She tells that she was tensed about Pihu, she is now happy that Pihu is okay. Rakhi and Kareena thank her for saving Pihu. Kareena taunts Preeta for not taking care of Pihu. Rishabh and Bani ask Sherlyn to take Pihu to her room. Bani tells Preeta that anything could have happened to Pihu.

Kareena tells that Preeta doesn’t worry for Pihu. She asks Preeta to thank Sonakshi for saving Pihu in time. Rishabh asks Kareena not to talk such things on a Diwali day. Bani tells that such accidents happen on Diwali. She tells that Preeta was at fault to not attend Pihu. Rakhi tells Rishabh that Preeta had been irresponsible. She explains Preeta that a child is a big responsibility. Kareena asks Rakhi to scold Preeta, than talking with love. She explains Preeta that she has failed in a mum’s role. Karan defends Preeta. He asks them not to say much to Preeta, she really cares for Pihu.

Bani tells that Sonakshi alerted them and they ran to save Pihu. She criticizes Preeta and sends her to the room, calling the Diwali celebrations over. Karan tells that they all have lost their minds. Sonakshi succeeds in making Preeta unhappy. She takes her revenge on Preeta. She is glad that the family is praising just her. Sherlyn keeps a watch on Sonakshi. Keep reading.

Reviewed Rating for Kundali Bhagya 15th November 2021 Preview Written Update: 3/5 This rating is solely based on the opinion of the writer. You may post your own take on the show in the comment section below.