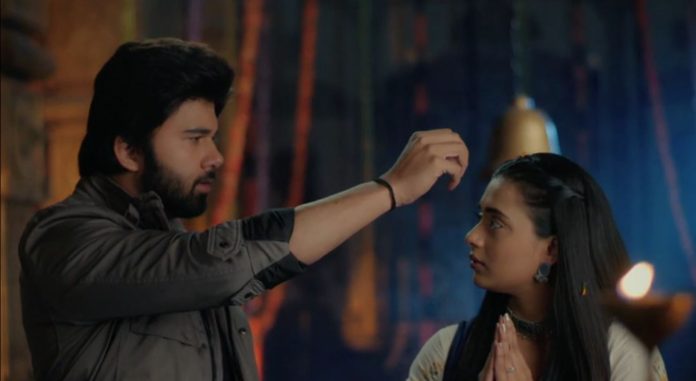 Sasural Simar Ka 13th November 2021 Written Update Karwachauth Aarav and Simar visit the temple together. He is very protective about her. Simar and Aarav take the blessings from the pandit. Pandit asks them their marriage mahurat. He tells that its Karwachauth fast tomorrow. He asks Aarav if he will also keep a fast for his wife, because these days husbands are also keeping the fast, like wives keep the fast for their happiness. Aarav tells that he will keep a fast for his wife, its unfair that just expectations are kept from wives.

He also wants to keep a fast and pray for Simar’s long life. He tells that love and respect, also responsibilities should be mutually kept. Pandit likes his answer. Simar tells that Aarav isn’t her husband. Aarav stops her from telling anything. He wants to show his dedication and loyalty. He promises to give all the happiness to Simar and take away all her sorrows. He tells that they should implement equality. Pandit likes his great thoughts. He asks Simar to perform the Pariknama. Simar asks Aarav why is he promising to keep the fast.

Elsewhere, Divya cooks the food. Shobha sees her struggles and asks her why can’t she cook. Divya is helpless. Shobha tells that she will cook the food. She sends the rotis for Roma. Roma sees the burnt rotis and passes taunts on Shobha. Shobha tells that everything is happening because of Vivek. Roma thanks Reema for making such a demand list. She is glad that everyone is dancing on her fingers. She finds Reema really smart. Reema tells that Roma’s good days have started, Lalit will keep a Karwachauth fast for her.

Roma asks will this really happen. She thanks Reema. Badimaa surprises Chitra by getting her favorite dishes prepared for dinner. She tells Chitra that she will never forget this day. Giriraj asks her the reason for it. Badimaa asks them to have dinner first. She shocks Chitra by showing her the video. Chitra is shocked that she is caught up so badly. Badimaa asks Chitra how did she like the surprise. She asks Reema to let the entire family know the matter. Reema shows the video to the entire family. Gajender, Vivaan, Sandhya and Aditi are shocked to learn Chitra’s crime. Giriraj worries that his name will also get involved.

Chitra starts lying to Badimaa. Badimaa doesn’t listen to any of her stories. Aarav drops Simar home. He asks her if she will keep the fast for him. She wants him to leave her hand before anyone sees them. He asks her to answer him before going. He takes her earring. He tells her that he will see Simar on the Karwachauth night and break his fast. He adds that he will make her wear the earring back. He asks her to wait for him. He promises to come and break her fast. She gets emotional. Keep reading.

Reviewed Rating for Sasural Simar Ka 13th November 2021 Written Update Karwachauth: 5/5 This rating is solely based on the opinion of the writer. You may post your own take on the show in the comment section below.