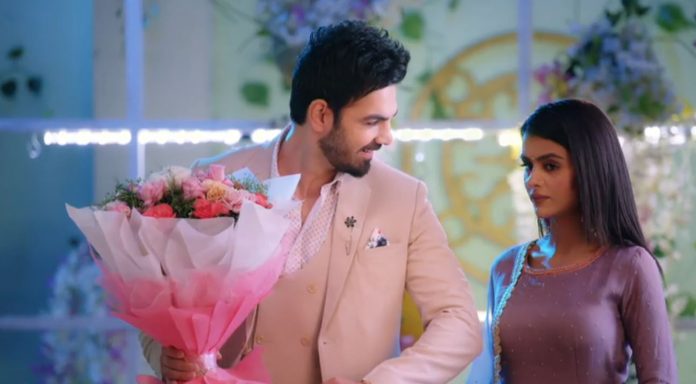 Udaariyaan 15th November 2021 Written Update Angad confesses love Angad and Tejo’s engagement news bring happiness in the entire family. Even Virks are happy for her new start. None of the family members know that Tejo’s engagement is just a drama to make them attend Fateh and Jasmin’s marriage. Jasmin is scared that Tejo might snatch Fateh from her once again, like the last time when Tejo married Fateh in the mandap meant for her/Jasmin. Jasmin wonders what is Tejo planning.

Elsewhere, Tejo meets Angad in the academy and thanks him for agreeing to help her. Angad acts lovey dovey, which makes her compliment his acting. She tells him that he is taking the drama very seriously. He replies that he does everything with passion and dedication, be it a love drama or really love. Tejo doesn’t realize that Angad is hinting of confessing his love to her. Fateh feels jealous when Khushbeer invites Angad and Tejo home. Later, Angad and Tejo come to Virk house, appearing happy and romantically inclined towards each other.

Fateh is unhappy to see Tejo moving on, but doesn’t realize the reason for his feelings. Angad asks Tejo to hold his arm and make an entry. Angad and Tejo compliment each other and look just perfect. Tejo feels awkward, but agrees to Angad just for Fateh’s sake. Jasmin gets angered seeing Tejo stealing Fateh’s attention again. What secret is hiding Fateh from Jasmin, is he lying about the surprise? Where will Angad and Tejo’s fake drama take their lives? Will Tejo realize Angad’s love confession? Comment your views and keep reading for a full update.

Fateh tells Tejo that things have happened so quickly. She agrees with that. He thanks her for convincing the families to attend his marriage. She apologizes to him that she is getting engaged at the time of his marriage. She clears that Khushbeer wanted her engagement to happen. Fateh asks her not to be sorry. He tells her that Angad is a nice guy. He asks her if she likes Angad.

Somewhere in his heart, he wishes that she says no. She tells that she likes Angad so she agreed for the engagement. Fateh is disheartened to hear this from her. He turns too upset and wants to just go away. She stops him and offers sweets to him. Fateh leaves from the academy. Angad senses that Fateh still has some feelings for Tejo. He observes Fateh and Tejo as well. Tejo misses Fateh and holds the boxing gloves.

Angad meets her and asks her if he is disturbing. She tells him that her family wants to meet him. Angad tells that they will be checking his details well, he will be getting a magnifying glass for it. She tells that Khushbeer is enough to talk to him and find out his truth. Angad and Tejo get into a funny banter, when they rehearse for their meeting with the elders. She laughs and tells him that he is taking this drama seriously. He tells that he will impress her family, he does everything passionately, it doesn’t matter if its love drama or really love.

Tejo tells that his acting is just perfect, the families will be convinced that they really love each other. He tells that she is always right. He adds that he doesn’t know much about her, he can’t make her family believe that he loves her. He wants to know Tejo well before he meets her family. She agrees. He asks her to accompany him for a long drive.

Fateh hugs Jasmin and calms her down, knowing she isn’t happy that Tejo is getting engaged at their marriage venue. Jasmin tells that she isn’t happy at all. He tells that their families and friends will come in the marriage, they will be blessed and able to enjoy well. Jasmin is tensed that Khushbeer is making the arrangements now. He tells that it doesn’t matter, Khushbeer will make the best arrangements for Tejo. He adds that they can use their savings in going to Canada. She gets happy on hearing about Canada. He asks her to call her friends and invite them. He wants her to stay happy.

Angad asks Tejo to think of him and help him not fail in his exam. Tejo agrees to go with him. He tells that he isn’t tensed for exam when she is with him. He asks if she is comfortable to go for dinner at Virk house. She asks why is he asking so. He tells that he doesn’t want her to get uncomfortable, he can invite Virk family to his farmhouse. She thanks him for the concern. She tells him that Virk family will be happy to see her. Mahi asks Jasmin and Fateh to get ready, Angad and Tejo are coming for dinner.

Jasmin tells that she doesn’t like them, but wants to find out the truth of their relation. Fateh worries that she may do anything wrong. Sandhu family is also worried that Jasmin is in the Virk house, she will create problems for Tejo again, when Tejo and Angad visit the Virks for dinner. Rupy doesn’t want Jasmin to burn Tejo’s happiness. Satti tells that Tejo isn’t weak, and now she has Angad with him. Angad and Tejo arrive at the Virk house for dinner. Jasmin and Fateh welcome them. Angad knows that they aren’t happy to see Tejo. Jasmin sees Tejo holding Angad’s hand, and she holds Fateh’s hand.

She introduces herself as Fateh’s would be wife. She wants to see who is Mr. Angad Maan, how did he steal Tejo’s heart in just a few days. Angad gives a befitting reply to Jasmin by taunting her character. Jasmin gets speechless. Angad meets the Virk family. Tejo introduces the family. Khushbeer and entire family are very happy for Tejo, and compliment Tejo and Angad’s jodi. Simran asks Angad to marry Tejo soon. Angad tells that Tejo agreed for engagement, but she may change her mind, so he is thinking to marry her soon. Tejo thinks Angad is overacting. Fateh and Tejo see each other.

Khushbeer asks Angad if he has told his family about Tejo. Angad tells that he told his grandparents about Tejo. He shows his love for Tejo in front of them. Fateh gets jealous seeing their moment. Khushbeer taunts Fateh for not valuing Tejo when she was with him. Tejo finds Fateh getting affected by Angad’s presence. Fateh gets tearful eyes while seeing Angad and Tejo together. Will he realize his feelings for Tejo in time? Does he deserve Tejo’s comeback? Keep reading.

Reviewed Rating for Udaariyaan 15th November 2021 Written Update Angad confesses love: 5/5 This rating is solely based on the opinion of the writer. You may post your own take on the show in the comment section below.