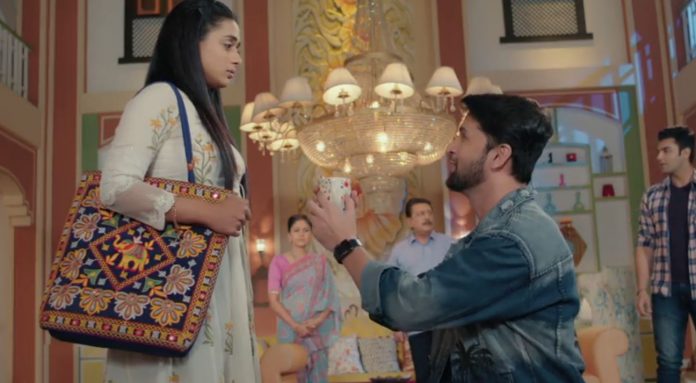 Reema tries to win her trust. Badimaa asks Reema to give her the keys, which carries the responsibilities of the Oswal family. Reema tells that she will ease out the burden by taking all the responsibilities. She adds that she is like Badimaa, who follows her mind instead her heart. She is also practical like Badimaa. Badimaa asks her to do another task. Reema asks her to command. Badimaa tells that the task is tough. She asks Reema to get Simar married to someone and send her to her new Sasural.

She tells Reema that she will forgive Reema for the past mistakes and reward her with the control of Oswal family. Samar tells them that he makes the best coffee in the work. Simar refuses to have the coffee made by him. She tells that she won’t be singing in his music album. Her parents want her to sing for Samar. Samar finds hard to convince Simar. He recalls Aarav’s words that Simar is very helpful. He asks Simar to help him. She agrees to help. Samar apologizes to her. She asks how can she help him. Aarav is hopeful that Simar will keep the Karwachauth fast for him. Badimaa gives the Sargi to Sandhya.

She asks Sandhya to pray and keep the fast. Sandhya misses Simar. Badimaa tells that Simar had it written in her fate. Reema finds Sandhya crying for Simar. Reema wants to win Vivaan’s faith. She doesn’t think he can get saved from her plans. She plays a drama in front of Vivaan. She takes Sandhya’s blessings and also her sympathy. Sandhya counts Chitra’s mistake of risking Aarav’s life. She can’t forgive Chitra.

Reema tells that Vivaan can give his life for Aarav’s sake. Reema asks her to forgive Chitra for Vivaan’s sake. She shows Vivaan that she is trying to unite the family back. She asks Sandhya to save the shattering family. Samar tells that he wants to stay in a rented house. He asks them to find a good house for him. Indu assures that they will find a house. She tells about the Karwachauth. Samar asks Simar is she single or married. Simar and her family get speechless. Keep reading.

Reviewed Rating for Sasural Simar Ka 15th November 2021 Written Update Samar’s appeal: 5/5 This rating is solely based on the opinion of the writer. You may post your own take on the show in the comment section below.