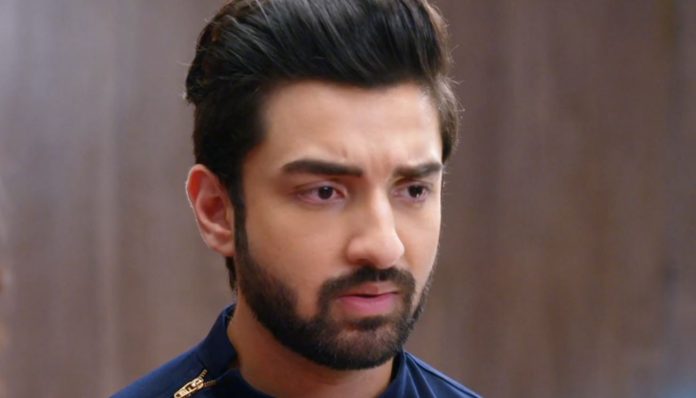 Bhagya Lakshmi 17th November 2021 Written Update Kiss twist Lakshmi asks Malishka isn’t she just a good friend of Rishi. Malishka shoots her reply that she isn’t a friend, but his girlfriend, she loves Rishi since ever. Lakshmi tells that Rishi is her love, her husband. Malishka shouts that she lost Rishi because of Lakshmi. She blames Lakshmi. Next, Lakshmi and Malishka get stuck in the firesparks. Rishi runs to save them. He gets confused whom to save first. Rishi chooses to save Lakshmi first when he can save just one of them. Malishka gets heartbroken that Rishi has changed so much.

She yells at Rishi that he has become of Lakshmi by his own choice. Karishma rebukes Rishi for hurting Malishka’s sentiments. She tells that Malishka expected to have a good time with them, but she got hurt. Virender and Neelam are relieved that both the girls are okay. Virender loves Lakshmi as his daughter. He tells that he can’t see Lakshmi in danger. Malishka threatens Rishi of ending their relationship if he doesn’t prove his love.

She commands Rishi to kiss her right away and prove that his heart beats only for her. She tells Rishi that its his last chance to save their relationship. Rishi holds Malishka close to kiss her and prove her love. Lakshmi’s words echo in his ears. He remembers Lakshmi’s faith on him and their marriage. He steps away from Malishka. Will Rishi kiss Malishka to save their relationship? Will Lakshmi forget whatever Malishka told her about Rishi? What will be Rishi’s stand for his love and marriage? Keep reading.

Malishka tells Lakshmi that she wanted Rishi with her. Lakshmi asks her if she is joking. Malishka asks her to look at her and think if its a joke. Lakshmi tells that Rishi and she united because of Malishka. Malishka tells that she has always loved Rishi. Lakshmi asks her to know what she is saying and for whom. She adds that Rishi is her husband. Malishka accuses Lakshmi for snatching Rishi, who was her dream. Lakshmi gets upset on hearing that Malishka loves Rishi. She tells that if Rishi knows this, then he will be ashamed of their friendship. She threatens to shut the doors of the house for Malishka forever if this is true. Malishka is scared.

She laughs and tells Lakshmi that she had a bet with Sonia, it was just a prank. She hugs Lakshmi and calms her down. She tells that she also wants someone like Rishi, caring and loving. She adds that Rishi told her how he took care of Lakshmi, he really loves Lakshmi and proved to be an ideal husband. She calls Lakshmi really lucky to get Rishi. Lakshmi apologizes to Malishka for shouting on her. Malishka asks her not to worry.

Malishka finds Lakshmi very possessive. Lakshmi tells that she is afraid of losing Rishi, she has nothing else in her life. She asks Malishka to pray for Rishi and her. Malishka sheds tears. Lakshmi goes. Malishka calls Karishma and tells that she wants to meet her. The family celebrates Diwali by burning the firecrackers. Shalu tells Virender that Lakshmi didn’t get the loud sound crackers. She asks Ayush to explain it to Virender Virender tells that he has hidden some special crackers for him. Dadi tells that Lakshmi has refused them to burn the crackers. Ayush asks them not to stop Virender, they can get Lakshmi’s scolding later on.

Virender doesn’t want to upset Lakshmi. Ayush keeps the box away. Dadi tells that they will take some selfies by burning the crackers. Virender asks Ayush did he get the duplicate crackers. Dadi asks Ayush to remove the faulty crackers from their place. Malishka hugs Karishma and cries a lot. Karishma asks her the matter. Virender tells that they shall tell everyone about the faulty dangerous crackers. Lakshmi looks for Rishi. Malishka tells that Rishi has changed, he loves Lakshmi, he is denying it, but she can see it. She apologizes that she didn’t take her advice before.

Rishi reaches there and runs to save them. Viraj and Ayush help out Rishi. Rishi reaches Malishka. She just asks Rishi to save him. Lakshmi thinks of Rishi first and asks him not to come to save her. Viraj also gets there to help them. Rishi recalls the numerous times Lakshmi had risked her life to save him. Rishi leaves Malishka alone and runs to save Lakshmi. Malishka gets heartbroken. Ayush and Virender realize Rishi’s love for Lakshmi. Viraj saves Malishka in time. Stay tuned.

Reviewed Rating for Bhagya Lakshmi 17th November 2021 Written Update Kiss twist: 3/5 This rating is solely based on the opinion of the writer. You may post your own take on the show in the comment section below.