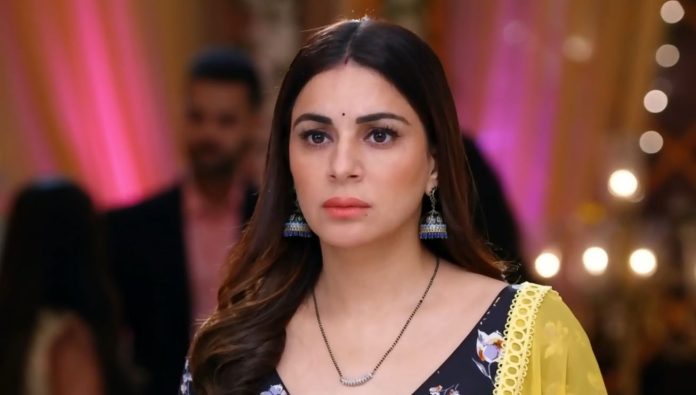 Kundali Bhagya 17th November 2021 Written Update Preeta’s pregnancy Preeta and Karan share a moment. They both have the same wish in their heart that they get blessed with a baby, and Pihu’s prayer gets fulfilled. Preeta convinces Karan to not fight with her on the Diwali eve. Karan wants her to take care of herself first and then the family. Preeta feels happy in her heart. She feels this Diwali has brought a new happiness and hopes. She awaits the reports. She expects the reports to bring a good news for Karan and her.

Later, Karan looks for Preeta. Sonakshi hinders him on the way. She asks him if he is looking for someone. He tells that he is going to meet Preeta. She replies that Preeta would be at home only, she won’t go anywhere outside. He asks her when did he say that Preeta isn’t at home. He doesn’t understand what is she hinting. Sonakshi is stressed that the reports will come home, and then the entire Luthra family will know the truth that Preeta can conceive, she can get pregnant and give a heir to the family. She recalls how she had bribed the doctor to lie to Preeta and break her heart.

Sonakshi’s evil plan gets revealed. She doesn’t want the family to know that Preeta can really conceive. Meanwhile, Karan meets Preeta. He tells her that the reports will be coming in a day. She is lost in her thoughts. Karan reminds that she wasn’t visiting the hospital and wasn’t ready for tests, but it was him who convinced her for it. He asks her why is she so desperate to see the reports. Preeta wishes to see her pregnancy report. She doesn’t share her feelings with Karan, so that he doesn’t hold the same hopes, which may not get fulfilled later on. What will be the bad effect of Sonakshi’s drugs administered to Preeta? Keep reading.

Karan wakes up at night. He doesn’t find Preeta beside him. He looks for her. Sonakshi is stressed that her secret can come out, Karan might know that Preeta can conceive, then everyone will know that Preeta has no complications. She wants to find a way out. She can’t let Karan know her evil plotting. She had tricked Preeta and Karan into believing that they can never become parents. Sonakshi is too worried. Sherlyn asks Sonakshi what is she thinking. Sonakshi tells that she wants to set her life in Luthra mansion. She asks Sherlyn what does she want. Sherlyn just wants Prithvi.

She asks Sonakshi to tell what she wants. Sonakshi replies nothing. Sherlyn tells that it means Sonakshi wants everything. Sonakshi asks Sherlyn not to get after her all the time and irritate her. Sherlyn realizes that Sonakshi is going to do something wrong with Preeta. Karan finds Preeta away in the morning as well. He gets ready and goes to look for her. Sonakshi blocks him on the way and irritates him. He doesn’t like to talk to her. She gets angry that he gets mad for Preeta all the time.

Karan finds Preeta sleeping in Pihu’s room. He smiles seeing her. He also joins Preeta and Pihu. Karan and Preeta cuddle each other. Sonakshi keeps an eye on them. She sees Preeta getting the doctor’s call. She doesn’t want Preeta to get the right reports. Rishabh and family find Kritika upset. They try to cheer up Kritika. Kritika tells that she likes Sherlyn, who isn’t trying to make her feel normal. He tells that she is normal, and everything is normal, she should move on in her life, the entire family is with her. Kritika tells that she doesn’t care for Prithvi, who was really disgusting. She doesn’t want to cry for an evil man like him. Kareena tells Kritika that things happen for its own good.

Rakhi asks Kritika to start the new year happily. They wish happy new year to each other. Kritika asks them why did Kareena and Bani scold Preeta so much when Pihu met with an accident. She defends Preeta. She asks if they will like anyone scolding her so much for a little mistake by forgetting all her efforts. She tells that Preeta loves Pihu a lot, even when Sonakshi is Pihu’s biological mother. She gets emotional. Rishabh agrees with Kritika. He wants the family to treat Kritika well. Kareena tells Kritika that she just explained Preeta, nothing else. Rishabh ends their arguments. He asks Kritika to come with him for a short vacation, she needs a change. Kritika agrees on his insistence. Sherlyn wants them to go away, so that she can help Prithvi well.

Rakhi thinks of Preeta after listening to Kritika. She goes to meet Preeta. Preeta tells that she has made all the arrangements. Rakhi apologizes to her. She asks Preeta if she didn’t get any anger on the elders, when they were wrong. Preeta shows her big heart again. She tells that she didn’t feel bad of anything, she is happy that everyone cares for Pihu so much. She is relieved that the family will look after Pihu even in her absence. Rakhi asks her not to talk such wrong things, she shall always stay with Pihu.

Preeta asks Rakhi not to worry, she didn’t feel bad of anything. Karan is tired of his work. Rishabh asks Karan why did the office staff come home with their wives to meet him. Karan tells that he invited everyone for the Diwali after party. He adds that he thought they won’t come, they casually invited them. Rishabh tells that he is their boss, they will come on his invite. Rakhi asks Karan how can he forget to tell them after inviting his staff and families. She worries that they can’t make arrangements so soon. Preeta asks her not to worry, she will manage everything.

Rakhi tells that Karan is lucky to get such a wife. Karan is really happy. He apologizes to Rishabh. The family attends the guests in the party. Kareena tells that Karan loves to give such surprises. Bani tells that its the first time the family didn’t know about the party. Preeta tells Rakhi that she will go to the kitchen and see the arrangements. Karan tells her that the reports are going to get delivered any time now. Sonakshi is worried on hearing this. Karan asks Preeta why is she desperate for the reports. Preeta wants to see her pregnancy reports. She tells that she is just nervous about the results. He asks her to take care of her health. He wants her to keep smiling and just see him.

Preeta thanks the guests for coming in the new year party. She asks them to forget all their tensions and enjoy. Preeta apologizes to Karan that she can’t dance with him, because of her injury. Sonakshi finds them busy with the guests. She sees the courier guy getting the reports. Sonakshi receives the reports. She worriedly checks Preeta’s pregnancy reports first. Keep reading.

Reviewed Rating for Kundali Bhagya 17th November 2021 Written Update Preeta’s pregnancy: 5/5 This rating is solely based on the opinion of the writer. You may post your own take on the show in the comment section below.