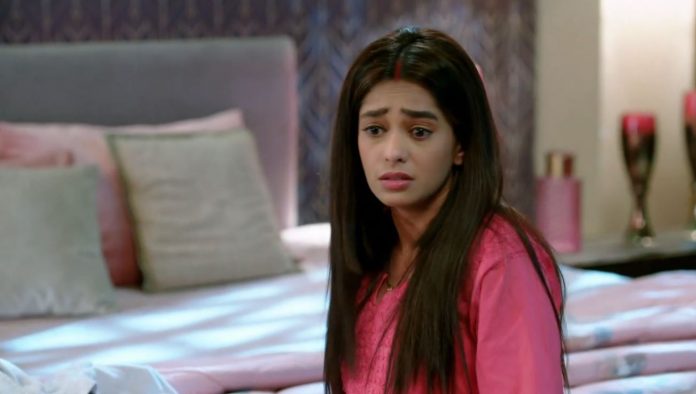 Kumkum Bhagya 17th November 2021 Written Update Crazy Prachi Rhea stops Ranbir and further brainwashes him against Prachi and Siddharth. She tells that Prachi and Siddharth would be going away and settling down together, as they would have dreamt. Prachi falls down at the door. She finds none from the family concerned for her. She leaves the house. Rhea gets closer to Ranbir. Pallavi tells that she got blinded by Ranbir’s love, she will now curse Prachi that she ruined his happiness. She doesn’t want to forgive Prachi. She tells Dida that Prachi has broken Ranbir’s heart, Prachi will cry all her life.

She asks Dida to not favor Prachi. She tells that Prachi is wrong, so she left silently, even Ranbir didn’t stop Prachi this time, because he is busy in stopping his tears. Rhea consoles Ranbir. Prachi walks lost on the roads. She thinks of Ranbir’s bitter words. She comes in front of a car. She gets close to get hit, but gets saved by Sushma. Sushma finds Prachi falling unconscious. She wonders what has happened to Prachi. Pallavi summons Rhea and Ranbir. She tells them that life has brought them back to the same point.

She wants them to unite. She declares that she will get them married, they shall walk together when their journey and destination are the same. Rhea is very happy to hear this. Dida stays silent. A short leap of a month is shown. Ranbir is seen heading the Kohli industry. He tells the media that he paid extra money to get a hotel deal. He adds that a man should always fulfill his wishes. Rhea watches Ranbir’s interview on the news channel. She is happy to see him successful. Pallavi tells Rhea that Ranbir’s life has changed and turned better since Prachi left from his life. She wants her son to be more successful.

She tells that Ranbir has made her feel proud, he has become a business tycoon now. Rhea asks her when will Ranbir marry her. She is still waiting to marry Ranbir. Pallavi tells that Ranbir will make himself stronger to forget Prachi and then marry Rhea. She asks Rhea to give some time to Ranbir, he is thinking just about work right now. She praises her son. Ranbir gets the new deal. He gets wishes from his manager. He tells that he doesn’t want to party. Manager tells that everyone want to celebrate his success. Ranbir asks them to host a party, but not invite him. Manager tells that Ranbir keeps his emotions to himself.

Ranbir asks the manager to not come late again, don’t talk emotional things, else he will get fired. He is clear in what he wants. Rhea tells Pallavi that she is worried, Ranbir isn’t going away from Prachi, but just her memories. Pallavi doesn’t understand it. Rhea tells that if Prachi meets Ranbir again, then history will repeat itself, he loves her a lot and will leave the house once again to go to Prachi. Rhea tells that one of the maids who works at Prachi’s house, is actually working for her.

She shows Prachi’s sorrowful video to Pallavi. Prachi is mentally broken down. She is in trauma over her failed marriage. While Ranbir has self-built himself to get rid of Prachi’s memories, Prachi holds his memories close and loses herself. She always thinks of Ranbir’s words and their good memories. Prachi turns crazy and loses her own identity behind her tears. Sushma feels sorry to see Prachi in a miserable state. She advises Prachi to move on. Rhea tells that Ranbir shouldn’t see Prachi in such a lost state, else his heart will melt for her. Ranbir and Prachi are at the signal.

They have a hit and a miss. Rhea tells that Ranbir will think that Prachi is in sorrow because of a heartbreak, because she just loved him. She doesn’t want Ranbir to become an emotional fool again and run back to Prachi. Prachi senses Ranbir’s presence. Sushma asks her not to think about Ranbir all the time.

Pallavi tells that Ranbir will never meet Prachi. Rhea asks Pallavi if she can guarantee this. She reminds Pallavi what happened on the day of the marriage. Pallavi guarantees that Ranbir will marry Rhea. She tells that she will get Ranbir and Prachi divorced soon, he hates Prachi. She plans to send the divorce papers to Prachi and get it signed by her. Prachi gets to see the success story of Ranbir. She cries for him. She is affected by their separation. Ranbir too misses her. He doesn’t want to think about her. Will Ranbir and Prachi’s love story begin again? Does Ranbir deserve Prachi now? Keep reading.

Reviewed Rating for Kumkum Bhagya 17th November 2021 Written Update Crazy Prachi: 1/5 This rating is solely based on the opinion of the writer. You may post your own take on the show in the comment section below.