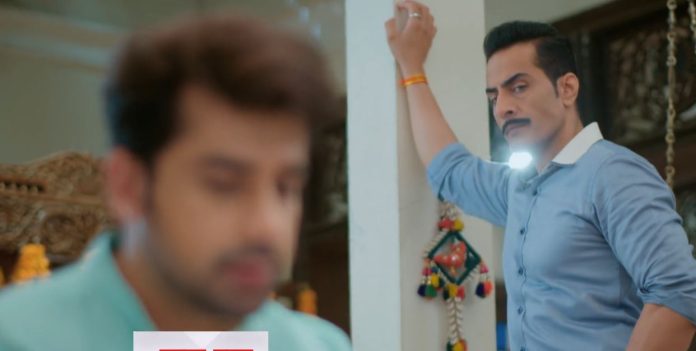 Anupama 17th November 2021 Written Update Vanraj returns Anuj says in childhood he heard that a person’s words bite more than a snake (Naagin) in his/her anger and Baa proved it in front of everyone. Today everything went wrong. Anupama says more wrong/bad will happen when Vanraj will get to know about what Baa did to Bapuji. Anupama says Vanraj might not have been a good husband but he is a good father and son. She also tells Anuj that Vanraj will get more distressed than her seeing Bapuji’s condition. Anupama says she thought that she will start afresh this diwali. She says she doesn’t know what more she will have to see and suffer.

Anupama sends Anuj to sleep saying she will call him when needed. She goes to the sleeping figure of Bapuji and apologizes to him, saying that he has to suffer so much because of her. At Shah house Baa is seen mad in anger. She continuously blurts, “I need nobody, everyone go away.” Pakhi, Samar and Kinjal get scared seeing Baa’s condition. They worry for her health. Pakhi says Vanraj would have handled Baa if he would have been present. Kinjal says Vanraj wouldn’t have let Baa insult Bapuji, if he would have been present.

Kinjal sends Pakhi inside with Samar. She asks Baa till when she will sit on the swing and also asks her to rest inside. Baa asks Kinjal to go away. Kinjal continuously tries to calm Baa but fails. Baa again asks her to go away. On the other side, Bapuji wakes up tense. Dolly is seen crying profusely and Sanjay tries to comfort her. Vanraj is also seen in tension out of town. Bapuji again wakes up from his sleep, scared and tense. Anupama feeds him some food. She cleans his mouth. Bapuji apologizes to Anupama for spilling water on the bed. Anupama returns to change the bed quilt but finds Baluji missing.

Worried, Anupama goes outside to search for Bapuji. Anuj asks her what happened. Anupama explains the situation. Anuj asks her not to worry and helps her in her search for Bapuji. They get shocked to see Bapuji asking the guard how much salary he gets for his job. What is the time of a guardys duty? The guard replies the salary is 7,000 rs. and duty timings are 8pm to 8 am. Bapuji asks the guard if he can help him get a job. Guard asks Bapuji why? Bapuji replies that he doesn’t want to be a burden on his daughter. He says he doesn’t want to be a burden to anyone and increase problems.

Guard agrees to help Bapuji find a job. Bapuji thanks him and asks him to not think he is old. He explains the guard that he is incompetent but not useless. Anupama cries seeing Bapuji’s condition. She goes to Bapuji and asks him what is he doing? Baouji says he was talking to the guard about finding a job for him. He says if he doesn’t get a job, he will do labour or drive a rickshaw. Bapuji days he will do anything but not become a burden on anyone. Anuj asks Bapuji to return home and talk next morning. Next morning Baa is seen doing pooja in shah house temple. She gives aarti to everyone and wishes them “navarsh”. Everyone confused takes the aarti in a confused state.

Kavya thanks Baa and requests her to bring Bapuji back and start afresh. Baa says Bapuji will return himself as he got very angry the previous day. She further says that he missed daughter when he was with family but will now miss his family being with daughter. She says he will come back on his own. Samar asks her if he is trying to comfort family or herself saying all this. Angry Baa asks him to not talk like this on navarsh. She asks everyone to get ready for pooja. Except Kavya everyone leaves. Baa says Bapuji will return himself. Kavya uses the opportunity and blames Anupama for taking Bapuji away to her house becoming a great woman.

Kavya instigates Baa saying that Anupama is taking revenge from her. She tells Baa that first Anupama made her and Bapuji fight and then took advantage of the fight. Kavya further says that Anupama is trying to separate Bapuji from the family. She says they can’t let this happen and needs to bring Bapuji back home. Baa says Bapuji will come back himself as no one can snatch her husband from her. Kavya provokes Baa saying that Anupama will fill Bapuji’s ears against them. She says to Baa that they will have to think how to bring Bapuji back?

On the other hand, Anuj helps Bapuji in tying his shoelaces. Anupama applies smiley stickers to Bapuji’s shoes. Bapuji recalls doing the same when he sent Anupama for a walk for the first time. Anupama and Anuj try convincing Bapuji to go for a walk. GK successfully convinces Bapuji to go for a walk. At Shah house, Baa asks Mamaji to forget everything that happened the previous day and bring Bapuji back. Kavya asks Mamaji to do the same. Baa says let’s throw an old fight’s bag in Anuj’s house and start afresh.

Mamaji pulls his bag and takes blessings from Baa. He tells her that he is leaving Shah house too. Baa gets shocked and asks Mamaji that her one slap pricked him so much that he is leaving his sister. Mamaji replies that not her slap but her that she said to Bapuji pricked him badly. He says he will never forget how badly she insulted and disrespected Bapuji. Mamaji says she has the right to slap him but doesn’t have the right to insult Bapuji. Baa says it’s between her and Bapuji. Mamaji tells Baa that by insulting Bapuji she got lowered in everyone’s eyes. Baa shouts. Mamaji asks her to not shout as he can shout too.

Anuj in the park thinks of a motivating shayari and asks Anupama to not worry as everything will take time but will get fine too. GK tries to make Bapuji smile or laugh with his jokes. Anupama asks Anun what he was doing outside her house last night. Anuj says he was worried about Bapuji. Anupama thanks Anuj for being there for her in the time of need. Back at Shah house, Mamaji breaks all relations with Baa and curses her that she will get alone. He says to her that she failed to find a good man in Bapuji. He also tells Baa that she would have learned her lesson if she would have got a husband of Vanraj’s nature.

Kavya thinks that now funny people have started talking emotionally too. Anupama, GK and Anuj ask Bapuji to try doing laughing exercises. Bapuji fails and cries saying he can’t. Anupama takes Bapuji with her. Anun tries to calm an emotional GK. GK says to Anuj that they are fine alone, if having relations breaks a person like Bapuji broke down. Anuj asks GK to think about being Anupama and Bapuji’s strength in this difficult time of theirs. Mamaji says that he would never be able to forgive her and leaves the Shah house. Baa breaks down, Kavya gets scared seeing Vanraj’s call. She ignores Vanraj’s call and again instigates Baa saying that Anupama must have manipulated Mamaji. She says to Baa that they need to solve the situation before Vanraj’s return.

In the next episode, Baa will forcefully try taking Bapuji with her, making him remember marriage promises. Bapuji will refuse to go with her and tell her that both of them will die alone. Vanraj will return and ask Paritosh if something happened behind him. Kavya will ask Bapuji what if Vanraj returns. Bapuji will ask Kavya to tell Vanraj that his father died. Keep reading.

Reviewed Rating for Anupama 17th November 2021 Written Update Vanraj returns: 4/5 This rating is solely based on the opinion of the writer. You may post your own take on the show in the comment section below.