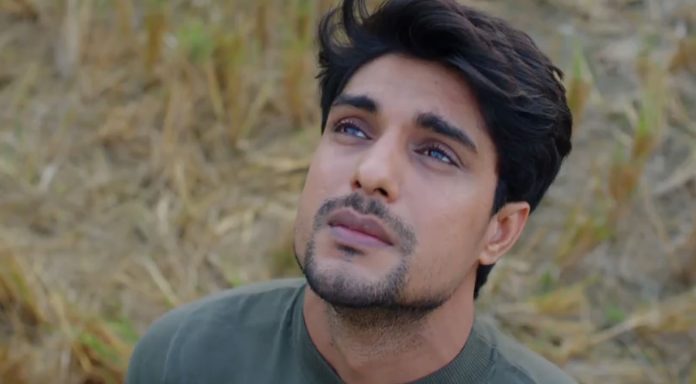 Udaariyaan 18th November 2021 Written Update Fateh’s answer Tejo comes to meet Angad. She finds him hurt and asks him who has dared to hurt him. Angad doesn’t tell Fateh’s name. She asks him who has come to meet him. She worried for Angad and does the first aid. Angad doesn’t name Fateh. He doesn’t want Tejo to misunderstand Fateh. Tejo asks Rajat who had come before her. Rajat doesn’t listen to Angad, and tells Fateh’s name. He tells her that Fateh had accused Angad for hurting her and bashed the latter without giving an earful. Tejo angrily goes to the academy to confront Fateh.

She asks Fateh by what right did he beat up her fiance. She rebukes his wrong move. She asks his actual problem. Fateh tells that he has a problem with Angad. He adds that Angad has no right to make her cry. Tejo taunts him that just Fateh has this right to hurt her and make her cry. She begs him to stay away from her and her life. Fateh doesn’t let her go and stops her, holding her hand. Tejo gets angry on his immature and unsure ways.

She wants Fateh to move on with Jasmin. Fateh doesn’t know her sacrifices, but still yearns for her. The more Tejo makes Fateh away, the more he feels pulled towards her. Fateh doesn’t understand why is he so unhappy after losing Tejo. Will Fateh realize his love for Tejo and marry her in the mandap setup meant for Jasmin? Is Fateh’s surprise actually for Tejo? Will fate bring Fatejo back together? Comment your views. Keep reading.

Tejo comes to meet Angad to get his signatures. She is shocked to see the wounds on his face. She asks how did this happen. Angad doesn’t tell her what happened. She tells that she can see that he had a fight with someone. She asks him who did it and why. He tells that this fight is a warm up session, it was good, because Tejo is doing the aid by her hands. She asks him to just tell her the truth. He asks her the reason for her tears. He asks why was she crying in the morning. Tejo asks him not to ask, it doesn’t matter. He asks her if Jasmin told her something bad. He understands everything.

He lies that he fell down the tractor. He asks Rajat to order two lassi. She tells that he isn’t good in making excuses. She asks Rajat who visited Angad before her. Rajat tells her that Fateh had come and had a fight with Angad. She asks the reason for the fight. She gets angry on Fateh. She rushes to lash out at Fateh. She finds Fateh hurt as well. She confronts him for beating her fiance by stooping so low. She asks him why did he leave his decency. He asks her if Angad came to complain to her. She asks him why does he care if she cries. He tells that Angad has no rights to make her cry.

She taunts that only Fateh can make her cry. She asks him how could he conclude that Angad made her cry. He tells that he did what he felt right. She asks him why does he care for her tears. She asks him to stay away from her life and let her stay happy. She mentions that they have no relation. She asks him to live happy with Jasmin. She tells that they both can’t see her making a new start. She doesn’t want to meet both of them. She tells that she is helpless to see his face at the academy, because she works here. She defends Angad, who is a true person, who can’t see her crying. She taunts Fateh that he had given her the most tears. He apologizes to her. He tells her that he can’t see anyone hurting her.

He asks if their connection broke after the divorce. She admits that it was a one-sided connection from her side, he was never connected to her. She reminds how he has hurt her by divorcing her. She requests him to stay away from her life. Fateh can’t let her go. Tejo angrily gets away from his sight. Fateh sheds tears for her. He gets angered that she didn’t understand his feelings. He never told her his feelings, but admits that he really cares for Tejo. He thinks who has made Tejo cry, if not Angad. He doubts Jasmin.

Khushbeer makes the arrangements for Tejo’s engagement. Jasmin gets upset and wants things to be according to her choice, because its her marriage as well. Fateh comes home to find out what did Jasmin tell Tejo. He confronts her. Mahi and Simran wish that Fateh and Jasmin’s marriage breaks. Jasmin asks Fateh if Tejo has come crying to him and complain about her. She calls it Tejo’s scheme. Fateh asks her not to overthink and blame Tejo. She calls him blinded. He asks her how can she have such poison in her heart against her sister. He praises Tejo who convinced the families to attend their marriage.

She tells him that Tejo is just acting great. He tells her that he loves his family, he fought his family for her sake, he wants them to accept her. He wants her to understand his concern. He feels indebted to Tejo, who is moving on in her life and lessening his guilt of cheating her. He warns Jasmin against hurting Tejo. He threatens her that she will see his hatred and anger if she dares go against his word. Jasmin accuses Tejo for making her fall in Fateh’s sight. She wants her revenge on Tejo. Tejo learns that her family has invited Angad home. Rupy tells that they want to discuss about the engagement with Angad.

They happily show the thoughtful gifts Angad got for them. Angad spends time with Dilraj. Tejo goes to meet Angad. She finds him gifting the shawls to the buffaloes. She asks Angad what is he doing. She tells that they are just acting. He asks her not to stay rude all the time. He tells that he is sensitive types. He tells her that he isn’t joking, its her game, but he will play it as he wants. He tells that he likes her, and her family is very important to him, he values them because he has no family of his own. She asks him if he has no family. He tells that he is totally alone in the world, his parents had died in a plane crash when he was young, he has his grandparents in London.

She sympathizes with him. He tells that she broke his heart. She apologizes. He doesn’t want to talk depressing talks by ignoring the breakfast made by Satti. He promises to take Tejo for lunch. Rupy finds Tejo and Angad laughing. He feels confident of his decision to get them married. Jasmin asks Fateh if he really wants to marry her. He tells that he can’t express his love to her every day. She tells that he isn’t talking to her well, like he talks to Tejo. She questions his feelings. She asks him if he has beaten Angad out of jealousy, because he has feelings for Tejo. Fateh is speechless. Stay tuned.

Reviewed Rating for Udaariyaan 18th November 2021 Written Update Fateh’s answer: 4/5 This rating is solely based on the opinion of the writer. You may post your own take on the show in the comment section below.