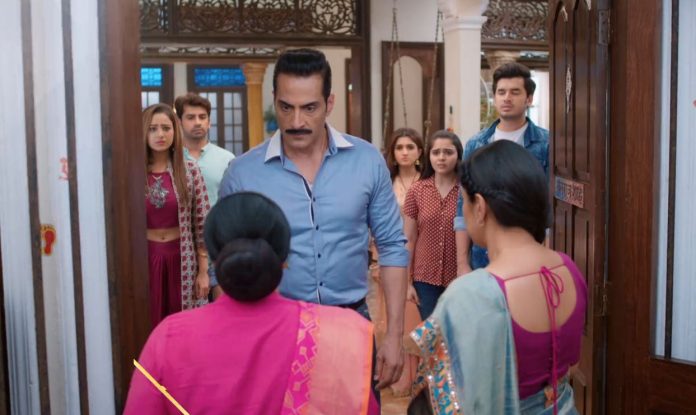 Anupama 18th November 2021 Written Update Vanraj stunner Anupama brings Jalebi and Rabri for Bapuji. Bapuji refuses to have it. Anupama asks Bapuji to tell what he wants to eat, she will try not to prepare it as soon as possible. She asks Bapuji if he wants to eat a cream roll. Anuj and GK also demand to have cream rolls. Bapuji gets surprised seeing Mamaji. Mamaji hugs Bapuji and cries. Bapuji asks Mamaji if he came to meet him? Mamaji replies that he came to live with him. He apologizes to Anupama for coming without informing her.

Mamaji also says to Anupama that he will live in any corner of the house or either sleep outside on a sheet. Anupama stops him from apologizing to her. He requests Anupama to let him live with Bapuji and for that he will even help in household chores. Mamaji calls Anuj as Ramanuj and asks him to make Anupama understand him as she agrees to his words. Anuj tells Mamaji that his name is Anuj not Ramanuj. Anupama smiles and says that nobody will be sad in this house anymore. Mamaji again forgets some things and makes everyone laugh. Samar arrives there and wishes everyone a ‘Happy New Year’. He offers everyone Gujarati breakfast.

Anuj feels happy seeing everyone present in front of him happy and thinks of a shayari. Mamaji gets Vanraj’s call. Bapuji panics and requests to not pick up Vanraj’s call. He requests everyone to not let Vanraj know what happened presently. Bapuji says he doesn’t want Vanraj to create any trouble after knowing what happened with his father. Kavya arrives there and tells Bapuji that Vanraj will not know anything if he returns to the Shah house. She requests Bapuji to return to the Shah house, forgetting everything that happened. Bapuji sees Baa coming out from behind Kavya. He recalls how badly Baa taunted and insulted him in front of everyone.

Bapuji shivers and Anupama handles him. Anuj and GK try leaving. Kavya stops them from leaving, taunting that everything is clear to everyone. Anupama too recalls Baa’s ill words against Bapuji. She asks her to come inside. Baa recalls how Kavya explained to her that Vanraj will create a mess if he gets to know what happened? Kavya also explained to Baa that if everything gets resolved by apologizing to Bapuji then there is no loss to them in it. She requested Baa to pretend apologizing to Bapuji to not let Anupama make everyone leave Shah house. Kavya explained to Baa that they cannot let Anupama win.

Baa asks Bapuji to return to the Shah house. Vanraj gets tensed that why is nobody talking to him from his family. He feels something off and decides to return to the Shah house and thinks it’s good he hid in Ahmedabad only. Baa makes Anupama leave Bapuji’s hand. She tells Bapuji that everything happened between them, outsiders cannot interfere in between them. Baa tries grabbing Bapuji with her. Anupama asks Bapuji to not hurt Bapuji. Baa tells Anupama that Bapuji is her husband, what is her problem. Anupama says Bapujj is like a father figure to her and she will not handle anyone hurting her father.

Baa grabs Bapuji towards the exit of the house. Samar asks Anupama to stop Baa from taking Bapuji. Anupama says she can’t interfere in between husband and wife. Bapuji makes Baa leave his hand and closes the door on her and Kavya’s face. He starts panicking and saying that he will not go anywhere especially Shah house. Everyone feels shocked seeing Bapuji’s condition. Vanraj returns to the Shah house and questions Paritosh. Paritosh tries to avoid revealing the truth to Vanraj. Bapuji tells Baa that she herself created a wall between them. Baa explains to herself that she did wrong as she suffered wrong.

She explains that she insulted him because she was angry as everyone left her alone at the festival time. She again and again requests Bapuji to return with her. Bapuji refuses to return and tells Baa that now they will die alone. Baa asks Anupama to open the door as she will not leave without talking to her husband. Kavya and Baa try to manipulate Anupama emotionally. Baa accuses Anupama for creating a rift between her and Bapuji. Bapuji stops Baa from cursi g Anupama. He tells Baa that if she will try cursing Anupama she will not be able to see even his dead face.

Bapuji takes Baa inside and asks her what she wants to talk about. On the other hand, Paritosh tells a lie to Vanraj that everyone went to the temple. Vanraj feels that everybody is hiding something from him. Bapuji asks Baa what more she has to say? Baa tells she get angry seeing her husband supporting someone against her. Bapuji replies to Baa that she was wrong. Baa tells he could have scolded her if she did wrong? Bapuji replies that he realized her sacrifices and hard work but she broke him today. He tells her that her brother and grandchildren left her alone at the festival time because of her mistakes. Bapuji further explains to Baa that her good deeds got washed away with her bad deeds.

He asks Baa to leave. Kavya asks what will they tell Vanraj. Bapuji asks her to not tell the truth to Vanraj and instead tell him that his father died. Baa asks him to say anything like this. Bapuji lowers down to Baa and asks her to let him live remaining life peacefully. Kavya tells Anupama that Vanraj returned. Anupama asks her to tell Vanraj that Bapuji went outside. She sends Samar to handle Vanraj. Vanarj asks Paritosh why Bapuji didn’t take his last two doses? Paritosh lies to Vanraj and excuses himself.

In the next episode, Vanraj will not allow Baa to enter the house after knowing how badly she insulted Bapuji. He will pledge to not eat or drink anything till he convinces Bapuji to return. Baa will request Anupama to bring Bapuji back to Shah house.

Reviewed Rating for Anupama 18th November 2021 Written Update Vanraj stunner: 5/5 This rating is solely based on the opinion of the writer. You may post your own take on the show in the comment section below.