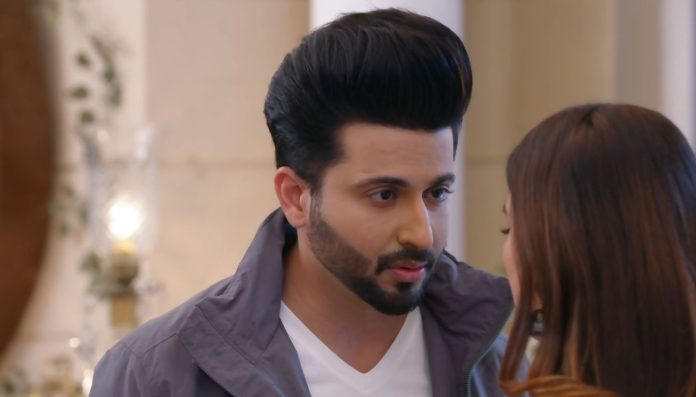 Kundali Bhagya 19th November 2021 Written Update News for Karan Sonakshi tells Sherlyn that she wants to take Preeta’s place in the Luthra house. She asks Sherlyn not to go against her, after knowing the entire truth of her conspiracies. Sherlyn doesn’t understand how easily Sonakshi told her the truth without any fear. She asks Sonakshi to be scared of her now. Sonakshi shows her a video of Sherlyn and Prithvi’s meeting in the jail. She tells that she is not a fool like Sherlyn. She adds that if Sherlyn shows the video to the family where she is the villain, then she will show the video in which Sherlyn is the villain. She promises to take revenge if Sherlyn dares go against her. Sherlyn gets threatened.

Sonakshi asks Sherlyn to mind her own business from now. Sherlyn agrees to keep quiet. Sonakshi takes the fake reports to Preeta. Preeta is disheartened to see the negative results for her pregnancy. Karan and Preeta get to see the reports and lose hopes again. Karan tells Preeta that they will never talk about her pregnancy again. He adds that she is the most important person in his life, a baby or anyone else doesn’t matter to him. He is very happy with Preeta. He wants their life to just have happiness. He pacifies Preeta over the sorrowful news. Keep reading.

Earlier in the show, Sherlyn tells that Sonakshi is lying. Sonakshi calls her a fool. She admits that she had fooled the Luthras, she had written Preeta’s future, she madly loves Karan and wants to get him back. Sonakshi tells that she always loved Karan, she made a mistake that she couldn’t confess love to him, she planned the marriage drama just to get Karan, she went to invite her doctor friend and got to know about Preeta’s reports blunder. She then asked her friend to handover the reports to her. She had kept the truth a secret, thinking Karan will leave Preeta if he learns that she can’t conceive. She admits her entire plan in front of Sherlyn. Sherlyn is shocked to know how long Sonakshi dragged her lie by her cunning plots.

Sonakshi tells Sherlyn that she had a doctor friend in Lonavla also, even that doctor lied to Preeta that she can never conceive, but Kareena surprisingly supported Preeta, she suggested Preeta to adopt a child. She tells that Preeta got Pihu as her daughter. She adds that she has come to Luthra mansion with a motive, that’s to drug Preeta so that she never conceives. She tells that she was adding the drugs in the milk to stop Preeta from conceiving. She admits that she loves Karan a lot, but Karan loves Preeta. She tells Sherlyn how Karan was panicking when Preeta fainted.

She shows her fake concern towards Preeta. Preeta is upset on checking the reports. Sherlyn finds Sonakshi really cunning. Karan and Rishabh ask Rakhi about the courier. Rakhi tells that she doesn’t know anything. Karan finds the courier with Preeta. He goes to check the reports. Sonakshi drugs the milk once again. Sherlyn watches her. Sonakshi isn’t affected by Sherlyn. Sherlyn tells that she will always keep an eye on her, she also has a recording of her crimes. She threatens Sonakshi.

Sonakshi tells that she can do anything with Preeta. She asks Sherlyn why does she want to stop her, when Preeta is their common enemy. Sherlyn asks her why is she so overconfident. She tells that she may tell the truth to the Luthras. Sonakshi knows that Sherlyn can’t tell anything to them. She threatens Sherlyn about revealing the latter’s truth. She shows the video to show her videography talent. Sherlyn is shocked to see Prithvi and her video.

Sonakshi reminds Sherlyn that the video was shot on the Diwali night, when Sherlyn was feeding the sweets to Prithvi with love. She threatens that she will prove Sherlyn as the villain by showing the videos to the Luthras. Sherlyn agrees to keep silent and not harm Sonakshi’s plans. Sonakshi calls it superb. She goes to Preeta. Karan asks Preeta if she got the reports. Preeta is much sad. She shows him the reports. He finds the reports okay. She tells that she thought she will get some good news when she heard about the pregnancy test in the tests package.

She was hopeful that she can conceive, as she feels normal always. She cries that she lost her hope again. He tells that they have already become parents because of Pihu’s coming in their lives. He doesn’t want anything else. He asks her why is she wishing for a child now. She tells that she was thinking to give a sibling to Pihu. He tells that he can give her enough time to plan that. He cheers up Preeta with his love. He asks her not to worry for little things. Sonakshi asks Preeta to have the health drink. She knows that Karan will ask Preeta to drink that for her good health.

Karan makes Preeta finish the milk. Sherlyn thinks Sonakshi is taking Karan’s help against Preeta, she is really clever. Karan wants Sonakshi to leave from their house when she has recovered. Preeta asks him not to say that. Sonakshi can go to any extent to get her love, even if she has to ruin Preeta’s life. Sherlyn praises Sonakshi as the best lover of Karan. She tells her about Mahira. She calls Sonakshi more smarter than her. Karan and Preeta share a moment of togetherness. They see the diwali crackers sparkling in the sky and smile. She likes the beautiful sight. He finds Preeta more beautiful than any sight.

He tells that her smile is his favorite thing. She calls it a cute gesture. He asks her to stay back with him. She tells that she wanted to sleep with Pihu in her room, but then Karan came there too. He tells that he was restless when she wasn’t there in their room. He tells that she makes his day beautiful. He asks her to promise that they will never talk depressing things, they will never talk of pregnancy hopes, they will not give any importance to other matters and stay happy in their life. Preeta promises him. He hugs her with love. Next day, Karan tells Preeta that he has to go for a meeting after the practice.

He adds that Rishabh has more work than him. He also wants some credit share. Rishabh tells that he is proud of Karan’s cricket profession. Karan tells that cricket is his passion. Sherlyn takes care of Rishabh. She stops him from eating the mushroom sandwich, because he is allergic to mushrooms. She apologizes to Rishabh that she didn’t pay attention before. He thanks her. Karan asks Preeta what happened to Sherlyn that she changed. Preeta tells that Sherlyn is taking care of her husband.

Rishabh doesn’t like the food. Sherlyn tells that she will cook well next time. He tells that he will try to adjust. Preeta finds Rishabh happy. He tells Preeta that Sherlyn told him that there is nothing between Prithvi and her. Preeta wishes that his trust stays intact. She tells that she is sorry to misunderstand Sherlyn, she can see Sherlyn’s love and concern for her. She is happy to see them together. Rishabh tells that he is also happy now, its a good change in his life. They share smiles of happiness, unaware that Sheryn is still cheating them. Keep reading.

Reviewed Rating for Kundali Bhagya 19th November 2021 Written Update News for Karan: 3/5 This rating is solely based on the opinion of the writer. You may post your own take on the show in the comment section below.