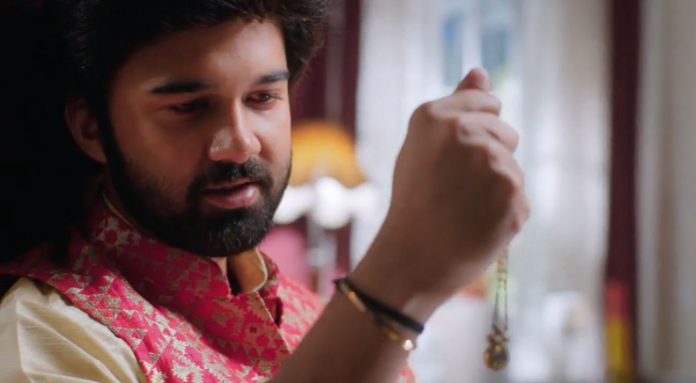 Sasural Simar Ka 18th November 2021 Written Update Aarav’s demand Simar gets into a trouble when Avinash tests her by asking her to eat a biscuit. He wants to see if she has kept the Karwachauth fast for Aarav. Simar thinks of Aarav. She isn’t able to eat it. She gets compelled by her parents. Thankfully, Samar comes in time and saves her. He takes the biscuit from Simar’s hand and eats it. He tells that he will get a pack of biscuits for them. He asks them what’s the matter, they look so serious. Simar is glad that he came on time.

Badimaa shows the girls’ pics to Aarav. She tells him that she is planning to get him remarried. Aarav and his parents are shocked. Badimaa tells her decision that Aarav will get remarried and move on in his life. Aarav asks her how can she decide it without asking him. Badimaa reminds his promise that he will agree to marry any girl she chooses for him. He recalls his promise. Badimaa wants to ask his choice this time. He tells that he will tell his choice. He rejects all the girls and tears their pictures.

He angers Badimaa and asks her to try again. Badimaa shouts on him angrily. She asks him what type of girl does he want. He names Simar, and shocks her. Aarav tells that he just wants Simar. He adds that there is no one like Simar. He asks Badimaa if she can get him married to Simar, if not, then she doesn’t need to find any other girl. He refuses to get remarried to anyone else. Badimaa wants him to stop taking Simar’s name. She asks Reema to get Simar married to someone, only then Aarav will forget her.

Reema wants to know who will be that unlucky person to tolerate Simar. She goes to meet her parents. Indu tries to arrange a room for Samar. Reema and Roma come home. They think to have fruits without letting their Sasurals know. Indu stops them from eating anything. She hugs her daughters. She tells that she likes a guy. Reema asks did she find a guy for Simar. She asks Indu to get Simar married to the guy. Indu tells that the guy is a music composer, he wants to make an album with Simar, but she refused.

She asks them to explain Simar to sing for Samar. Reema and Roma agree to meet him. Reema wants to see who is the guy with Simar. She goes on the terrace. Samar bonds with Simar. He tells that they are friends now, they will turn the friendship into partnership. He asks her to sing for him. She refuses to accept his friendship or partnership. She tells that she will not sing. Samar laughs seeing Simar’s cute warning. Reema reaches there and finds Samar and Simar together.

Samar asks Simar not to judge him without knowing him. Samar requests her to sing a song for him. Reema gets hopeful that she found the prospective groom for Simar. Samar gets dramatic. Reema doesn’t care for Simar. She just wants to win in her aim. Reema introduces herself to Samar. Samar tells that he is Simar’s friend. He tells that she is interesting, but Simar is always angry. He pleases Reema with his charming talks. Reema asks him to convince Simar. He tells that he is sad, because he is homeless. She tells that she can solve his problem. She adds that Samar and Simar’s names sound similar.

He tells that Simar is totally different, they are poles apart. Reema tells Indu that Samar can sleep on the roads. Avinash asks her if she is joking. Reema asks Samar his budget. She asks him to give two months advance and occupy the upstairs room, because Roma isn’t living in Narayan house right now. Samar congratulates everyone. Indu tells that she didn’t think of this before. She praises Reema for the wonderful idea. Simar tells that they don’t know Samar well. Reema tells that they can know him if he stays along, Samar has a big fan following already.

She asks Samar to follow the ground rules. Samar agrees to her. He thinks of convincing Simar some way. Aarav is sure that nobody can take a place in his heart, and even Simar won’t give his place to anyone. Samar thanks Reema for finding a roof for him so soon. Indu hugs Samar with love. Simar finds happiness in her happiness. She imagines Aarav in Samar. She wishes Aarav gets accepted by her family. Keep reading

Reviewed Rating for Sasural Simar Ka 18th November 2021 Written Update Aarav’s demand: 3/5 This rating is solely based on the opinion of the writer. You may post your own take on the show in the comment section below.