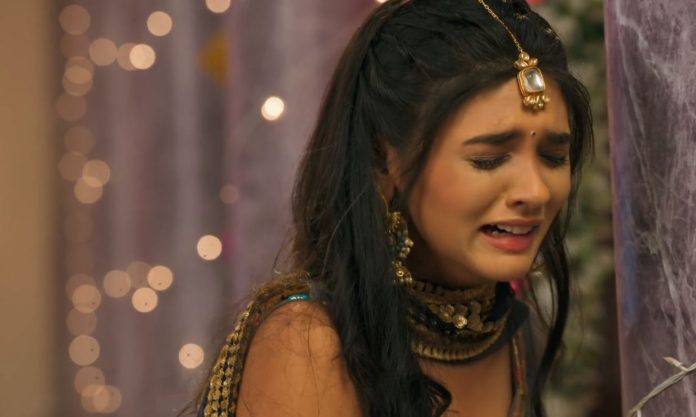 Yeh Rishta 18th November 2021 Written Update Akshu accused Akshara runs outside the Goenka Mansion and cries. She recalls Abhimanyu saying that they were clear from day one that they love each other. She also recalls Abhimanyu leaving disappointed because of her silence. Akshara asks herself why she thought that Abhimanyu loves Aarohi when she felt Abhimanyu’s emotions for her. She blames herself for hurting Abhimanyu and Aarohi. She recalls that she didn’t even look into Abhimanyu’s eyes, when he requested. Akshara thinks if she would have spoken the truth, Aarohi wouldn’t have ever forgiven her. And she would have lied, she would have hurt Abhimanyu.

She thinks that she committed a mistake by staying silent but if she would have answered him it would have gone more wrong. She alone apologizes to Abhimanyu and Aarohi. Aarohi comes there and makes fun of Akshara. She insults Akshara saying that she always commits a mistake and apologizes. Aarohi asks Akshara to stop acting. She tells Akshara that her apologies never lessened her pain or returned her snatched things. She asks Akshara to not favour her by apologizing to her. Akshara requests Aarohi to understand her once. Aarohi tells Akshara that she understands her very well. She accuses Akshara of deliberately creating confusion.

Aarohi blames Akshara for not being able to handle her happiness. Akshara tells Aarohi that she wasn’t at fault in the whole confusion. Aarohi accuses Akshara of planning against her. She asks Akshara why she tried impressing Abhimanyu with her singing, when she knew that she is not worth being Abhimanyu’s wife. Aarohi further asks Akshara if she wanted Abhimanyu to not like her. Akshara tells Aarohi it isn’t like what she is thinking. Aarohi says it is like she is thinking. She asks Akshara how her stage fear went away while singing on Abhimanyu’s request in front of the whole restaurant.

Aarohi doesn’t stop and accuses Akshara of acting. She asks Akshara how dare she call her mother as hers too. Akshara stops Aarohi from accusing her more. She tells Aarohi that she has heard a lot from her since childhood. Akshara telms Aarohi she won’t listen to ehr anymore because in present confusion she wasn’t at fault. She continues telling Aarohi to blame her as she alone is not responsible for the whole confusion. Akshara tells Aarohi that they, their family and Abhimanyu’s family together are responsible for the confusion. Parth and Neil take Abhimanyu home.

On the other side, Harshvardhan starts blaming Manjari for the whole confusion between them and Goenkas. He again blames her for ruining Abhimanyu’s happiness. Anand tells Manjari that she failed to help Abhimanyu get his happiness and love. Harshvardhan continues to blame Manjari for ruining all works. He accuses Manjari of not being able to become a good wife or mother. Mahima tells Manjari that she didn’t know about Abhimanyu’s choice. Harshvardhan says how a woman who never understood her husband will be able to understand her son. Manjari replies that how a man who never understood his wife will be able to understand a mother.

Goenkas on the other hand tries to calm Aarohi. Aarohi refuses to listen to anyone and asks them to get Akshara married to make her happy. Akshara asks Aarohi to stop and see how everyone is getting tense. Aarohi asks Akshara what about her problems? She asks Akshara if her emotional dialogues can bring Abhimanyu back to her. Manish asks both of them to stop fighting. Aarohi recalls Akshara giving her their mother’s earrings and telling that whoever gets married first gets the earrings. Frustrated, Aarohi gives her chunri, their mother’s earrings and Birlas traditional bangles to Akshara and asks her to get married. She accuses Akshara of proving her no. 2.

On the other hand, Abhimanyu requests his mother to stop crying and takes her away. Harshvardhan gets angry at Abhimanyu for not agreeing to him. He tells Abhimanyu that their reputation got ruined and asks him to clear what to do next. Neil thinks it is his mistake too. Abhimanyu clearly tells Harshvardhan that he loves Akshara and will marry her only. Harshvardhan asks Abhimanyu if he will marry a girl who didn’t clearly answer him if she loves him or not. Back at Goenka Mansion Aarohi asks Goenkas to send Akshara away by getting her married. She again accuses Akshara of wishing to get Abhimanyu from wishing well during the trip.

Abhimanyu on the other side asks Harshvardhan to not interfere between him and Akshara. Harshvardhan asks Abhimanyu to justify Akshara’s silence. He requests Abhimanyu to realize that Akshara is not worthy of him. Abhimanyu again says he loves Akshara and will marry her only. Aarohi’s taunts make Akshara run away crying. Kairav gets angry and asks Aarohi to stop as she said enough. At Birla house, Manjari apologizes to Abhimanyu for ruining his happiness. Abhimanyu tells Manjari that she is alone, not responsible; everyone was at fault.

Akshara cries and thinks why Aarohi doesn’t understand that she can’t always be wrong. She also thinks about why Aarohi considers her as her enemy. Akshara thinks she can leave anything for her. She thinks she even left Abhimanyu for Aarohi. Kairav comes and tries comforting hurt Akshara. Akhilesh tries calming Aarohi who continues blaming Akshara.

In the next episode, Manjari will ask Abhimanyu to not let go off Akshara if they both truly love each other. Akshara will cry seeing sleeping Aarohi accusing her of snatching Abhimanyu from her. Kairav will ask Akshara to make a final decision and finish everyone’s problem. Akshara and Abhimanyu decide to meet each other.

Reviewed Rating for Yeh Rishta 18th November 2021 Written Update Akshu accused: 3/5 This rating is solely based on the opinion of the writer. You may post your own take on the show in the comment section below.