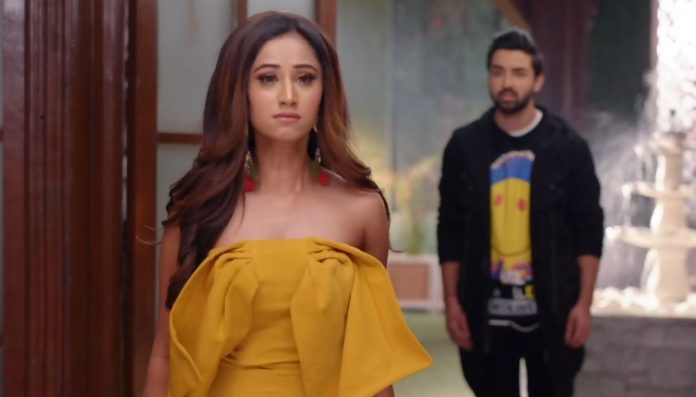 Bhagya Lakshmi 20th November 2021 Written Update Malishka storms Lakshmi feels lucky to get Rishi in her life. She confesses her love to Rishi. She tells him that he is a part of her. They have a romantic hug. Malishka comes to meet Rishi. Rishi is hurt that Malishka didn’t believe him. Somewhere in his heart, he starts feeling for Lakshmi. Lakshmi asks Malishka not to feel that she has no right on Rishi after his marriage. She tells that they are friends, so Malishka will have the same rights on Rishi as always. She asks Malishka not to fight Rishi. Malishka blurts out the truth that Rishi left her because of Lakshmi. Rishi is worried that Malishka’s words may hurt Lakshmi. Malishka asks Rishi to admit that he left her, that he ended ties with her. Rishi gets speechless to answer her in front of Lakshmi.

Earlier in the show, Malishka tells Kiran that Rishi left her in the fire and went to save Lakshmi. She hugs Kiran and cries. She asks Viraj to excuse her, she will meet her tomorrow. Viraj asks her to take care. Lakshmi and Rishi share a moment. She thanks him for always being there for her. She tells that she feels she is nothing without him. She feels protected with him. Viraj is sure that Malishka is hiding something. Kiran asks why is he thinking so. Viraj feels Malishka loves someone from the Oberoi family, she is hurt. He doesn’t think she loves Rishi, because he is married. He thinks if she loves Ayush. Kiran asks him not to overthink. Viraj takes a leave. Malishka awaits Rishi’s call. She misses him.

Lakshmi confesses her feelings for Rishi. She tells him about the first meeting. Rishi asks her what did she think on seeing his picture. Lakshmi tells that there was something between them, like they have a bond of lifetime, that’s why they met and united. He holds her saree and stops her. He asks her to keep talking. He feels glad and at peace on hearing her talks. She tells that its a unique compliment, that he likes to hear her talks. She feels shy when he stares at her. She tells that she is feeling strange.

He actually wants to hear his name. He asks whom does she like in his family. She tells she likes Neelam. He excludes his sisters also. He asks her to leave the family and just tell him, who she likes between Ayush and him. She tells that she likes Ayush. He asks her if she doesn’t like him, when she can like everyone else. He tells that she didn’t take his name. Ayush comes there and finds them into a moment. Lakshmi tells Rishi that she doesn’t like him, because he is a part of her life, she is his existence and identity. Rishi gets impressed when Lakshmi confesses love to him, saying I love you. They both have a reciprocating hug. Ayush likes to see them together.

He shows his tears to her. She asks him the matter. He tells that she has no time for him. She goes after Ayush. Lakshmi asks Rishi not to put the wet towel on the bed, its a bad habit and she is irritated by it. Rishi tells that she is scolding a lot these days. She apologizes to him. He promises that he will never repeat his bad habit. Ayush tells Karishma about his breakup. He goes away and hears Neelam and Karishma discussing about his breakup. Neelam tells that they can get Ayush married to the girl he loves, he is emotional and mad. She asks Karishma to handle this with care.

She asks her to find out the girl and talk to her family. Karishma tells that she doesn’t know about the girl. He runs away to take help from Virender. They go to look for Ayush. Rishi and Lakshmi bump their heads. She asks him to hit her head again, else a dog will bite him. He laughs hearing this. He teases Lakshmi. She tells that its really necessary. They share a laugh. Ayush wakes up Virender. He tells that Rishi and Lakshmi were hugging, he got emotional and got tears, they looked lovely, he had to lie to Karishma and make a breakup story. He asks Virender to help him and save him from Neelam.

Neelam and Karishma come there to ask Ayush about the girl. Ayush asks Virender to tell the girl’s name. Karishma asks who has dared to reject her son. She asks Ayush to say the truth. Ayush tells that Virender knows everything about it. Neelam is upset that Virender doesn’t tell anything. Virender tells that Ayush likes guys. Karishma asks will Ayush get a husband home than a wife. Ayush tells that he is perfectly normal. He asks Virender to not make wrong stories. Virender tells that Ayush lost a business project, so he was crying. Karishma asks Ayush why did he tell about his breakup. Ayush lies about the important project. She asks him to not stress about it. Ayush thanks Virender for saving him. Rishi and Lakshmi have a sweet moment in the morning. Rishi finds her caring side. Stay tuned.

Reviewed Rating for Bhagya Lakshmi 20th November 2021 Written Update Malishka storms: 3/5 This rating is solely based on the opinion of the writer. You may post your own take on the show in the comment section below.