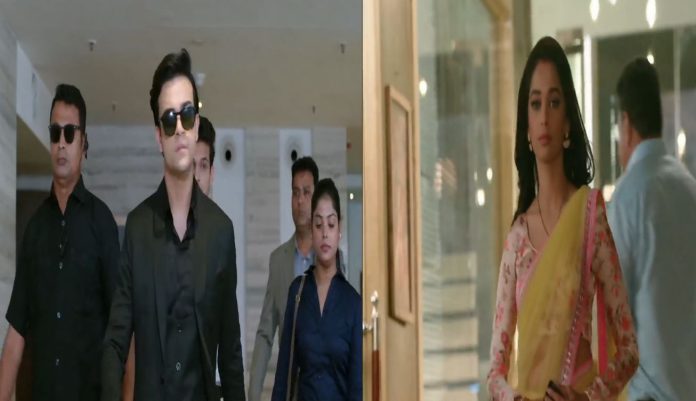 Kumkum Bhagya 22nd November 2021 Written Update Fire New Prachi Sushma asks Prachi to move on in her life. She asks Prachi to take over Pragya’s dream project. She asks Prachi who else will complete Pragya’s project if not her daughter. She makes Prachi emotional about Abhi and Pragya, and convinces Prachi to work on the project. Prachi doesn’t want to lose her identity given by her parents for Ranbir, who dumped her without giving her a fair chance to defend herself. She hates herself that she loved Ranbir so much, but couldn’t win his faith. Both Prachi and Ranbir try to move on in their lives. They don’t hate each other, but try to limit their hearts from loving each other.

Prachi agrees to join the business for Pragya’s sake. Rhea tries to rush with the marriage talks. She helps Ranbir by handing over his wallet. He asks her not to do anything that reminds him of Prachi. Prachi gets a new makeover, and shows that she can balance her life despite the divorce. Prachi reaches Sushma’s office to join her for the project. Sushma is happy to see Prachi’s confident walk of esteem and dreams restored. She reminisces Pragya when she sees Prachi. She decides to give a new direction to Prachi’s life, and keep her away from Ranbir always. Ranbir and Prachi will be seen meeting during their presentation for the same deal. Prachi will be giving him a tough competition.

Prachi is back with her sharp business skills. She will surely take down Ranbir’s business from the top and teach a lesson to the happy Kohlis. Abhi and Pragya united after their misunderstandings got sorted. Pragya gave him a chance because he didn’t tag her characterless ever, and always believed her loyalty and love towards him. Ranbir fails to trust Prachi and tagged her characterless, without finding the actual truth. Ranbir doesn’t deserve Prachi back after turning their relation so ugly. Do you think Ranbir stands a chance? How happy are you see the fire-new/fresh from the forge, confident Prachi? Comment your views. Keep reading.

Earlier in the show, Sushma promises that Prachi will never come back in Ranbir’s life. Rhea feels a big problem got solved. Pallavi and Vikram also believe that Sushma will keep Prachi away from Ranbir. Rhea is sure that Ranbir and Prachi will never meet now. Meanwhile, Prachi is praying at the temple to gain strength so that she can go away from Ranbir. Ranbir reaches the same temple, when his car suddenly breaks down there. Prachi wants to face the truth and accept the reality. She wants to forget Ranbir forever. Pandit tells that her prayers will be fulfilled. Ranbir and Prachi have a hit and a miss. They sense each other around, but fail to come in sight.

Ranbir and Prachi have a hit and a miss at the temple. Sushma meets Pragya and tells that a person has to pay a price for his goodness in the world. She asks Pragya why did she make Prachi like her, knowing the people punish the good doers. She tells that Pragya should have made Prachi a strong person. She adds that Prachi’s fate is also bad like Pragya. She tells Pragya that Ranbir had sent the divorce papers to Prachi, who is really mad to blame herself. She wanted Prachi to go to Ranbir’s house and rebuke him, instead sinking in sorrow. She cries for Prachi’s sorrow. She asks why isn’t Rhea like Pragya.

She tells that Rhea is practical like Abhi. She tells that Rhea isn’t a good daughter and a good sister, everyone hates Prachi in Kohli house. She feels Ranbir broke his relation with Prachi because of the family’s hatred for her. She knows that Prachi still has feelings for Ranbir. She didn’t wish Prachi to ruin herself in her love. She wanted Prachi to turn strong and balance her life. She tells Pragya that she couldn’t handle Prachi, who is just sinking in sorrow because of Ranbir.

She tells how Prachi is secretly crying for Ranbir. She thinks Pragya had forgotten Abhi because she was involved in the business. She gets an idea to involve Prachi in the business to distract her and help her forget Ranbir. She tells that she will take Prachi away from this city, she will take Prachi so far that even Ranbir’s memories don’t reach Prachi.

Ranbir and Prachi can feel each other around, but don’t get to see. They stay close, and still so distant. Prachi goes back. Ranbir tries to fix his car and leave. Prachi leaves from there, without coming into his sight. She comes home in the sobbing state, much to Sushma’s dislike. Sushma finds a way to bring back Prachi to her usual self. She tells Prachi that Pragya used to handle her business, but they had to name everything to Prachi because of the situation. Prachi tells that she will sign and return the property to Sushma. She apologizes to Sushma. Sushma asks her not to feel sorry for every matter.

She doesn’t want the property and business back. She asks Prachi to listen to her carefully. She tells Prachi about Pragya’s dream project. She adds that she has a team to handle the work, but she wants Prachi to take over Pragya’s dream project, being Pragya’s daughter. Prachi agrees to lead the project. Sushma tells that they will be leaving the city. She asks Prachi to pack her bags and be ready. Prachi feels strange that she couldn’t see Ranbir since a month. She feels she is going too far from Ranbir. Ranbir and Prachi miss each other. Prachi’s voice echoes in his ears.

He shuts his ears, after shutting the doors of his heart for her. Ranbir and Prachi imagine their past romantic moment. They look at the moon in their memory. He doesn’t know if she is missing him. He hurts himself in rage that he isn’t able to get over Prachi’s memories. Rhea comes to aid his wound. She finds him hurting himself and stops him. He doesn’t let her do the aid. Rhea knows that he is still missing Prachi, be it good memories or bad memories, but Prachi is still in his memories.

Reviewed Rating for Kumkum Bhagya 22nd November 2021 Written Update Fire New Prachi: 4/5 This rating is solely based on the opinion of the writer. You may post your own take on the show in the comment section below.