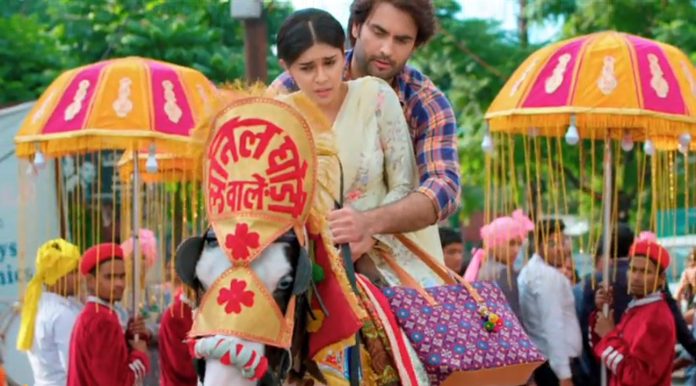 Sirf Tum 19th November 2021 Written Update Crazy Ranvir Ranvir tells his friends about finding someone with whom he can spend his entire life. He tells that the girl is really simple as his mother, he has fallen for the girl and now she has become his lifetime. He tells that just she will be there in his life from now. He gets obsessed for Suhani. He asks them not to touch the painting, else their medical career will end before starting. His friends say Ranvir has fallen in love and the girl doesn’t know it. Suhani prepares her best for the entrance exam. Sudha wishes her to fulfill her dream of becoming a doctor.

Suhani asks Sudha not to get sentimental all the time. Sudha asks her to sleep and wake up on time. Suhani knows that Sudha will wake her up on time. She takes Dadi’s blessings in the morning. Everyone wishes Suhani all the best. Rakesh informs Vikrant that he is reaching the site in some time. He blesses Suhani. He tells her that she raised a voice for her dreams, she has to fulfill it and make them proud. He asks Sudha to go with Suhani, because he can’t take her today. Ranvir waits for Suhani. He gets her number from the principal’s office. He calls her to find out where is she. Suhani gets stuck in the traffic jam.

Ranvir calls Suhani to know where is she. He tells that her dad has given her responsibility to him. She asks if he didn’t get rusticated. He hears the other man shouting about the traffic. Ranvir hears the address and rushes there to pick Suhani. Suhani tells Sudha that the traffic will not clear soon, she has no time for the exam. They get down the bus and try to find some way to reach the college. Ranvir reaches Suhani and meets her. He tells her that he has come to take her to the college. He introduces himself to Sudha.

He tells that Rakesh has given Suhani’s responsibility to him. He asks Suhani to come with him. Sudha asks Suhani to go with him. Ranvir’s bike doesn’t start. He realizes about the lack of fuel. He calls his friend and scolds him for his carelessness. He asks how will he come now. He finds a baraat there. He sees a groom on the horse. He tells Suhani that the bike didn’t work, but he has a way. He goes to talk to the groom. He tells that his happiness will be snatched after his marriage, its better that he goes for a dance.

He borrows the horse from the groom. He convinces the groom by his talks. Ranvir asks Suhani to come for the exam. The groom goes to dance in the baraat as Ranvir tells him. Suhani and Sudha are surprised. Ranvir tells Suhani that she has no option than the horse to reach the college on time. Sudha asks Suhani to go. Ranvir asks Suhani not to get scared. He takes Suhani on the horse. He advises her about the entrance exam. She tells that she has studied everything. They make an entry in the college, riding the horse. The students laugh seeing their unique entry.

Ranvir tells Suhani that he can’t let her dreams lose out, she will fight and he will become her shield. He asks her to go for the exam. Professor asks him why did he get the horse in the college. Ranvir tells that he had to get Suhani for the exam. He wishes Suhani all the best. Suhani goes for the exam. Ranvir scolds John for his negligence. He asks his friend to go and return the horse to the groom, else his bride will run away. Ansh hears Ranvir’s friends talking. He learns that Ranvir is in love.

He goes to find out the girl. He goes to the exam hall with an intention. Ranvir gives a water bottle to Suhani. Ansh finally gets to see her. Ranvir reaches back with glucose water. Suhani asks him to go. Ranvir pays special attention to her. Professor asks Ranvir not to come back, else he will cancel Suhani’s papers. Suhani gets into tension. Keep reading.

Reviewed Rating for Sirf Tum 19th November 2021 Written Update Crazy Ranvir: 3/5 This rating is solely based on the opinion of the writer. You may post your own take on the show in the comment section below.