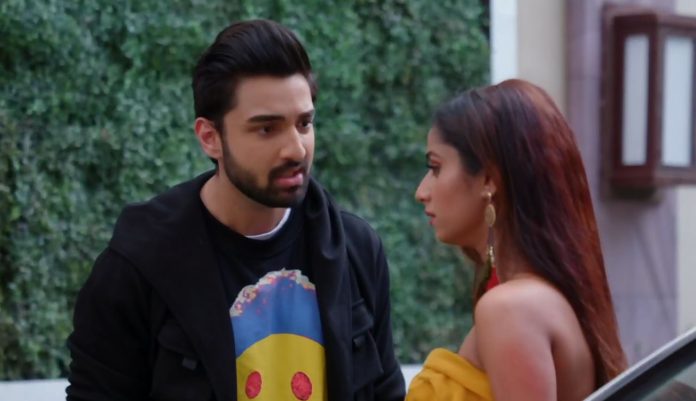 Bhagya Lakshmi 22nd November 2021 Written Update Rishi cheats Lakshmi tells Shalu that she had doubted Rishi for no reason. She regrets that she doubted him that he is having an affair with someone else. She didn’t wish to hurt Rishi by her suspicion. She tells how Rishi got upset because of her questioning. She tells that seeing Rishi’s care and concern, she is sure that he has no feelings for anyone else, he can never have an affair, he is a true person. She believes that her relation has turned stronger with time. She tells that Rishi can never cheat her, and from now, she will never suspect him.

Rishi is still cheating Lakshmi. He goes to meet Malishka. He tells Malishka that he loves her a lot and he can’t live without her. Malishka is much angry after he failed to kiss her and proved that she is out of his heart. Lakshmi tells Shalu that just she exists in Rishi’s life, there is no place for anyone else. Rishi tries convincing an upset Malishka that he feels his true self when he is with her, he is her crazy violent lover. He adds that he can kill anyone for Malishka’s life and can end his life as well. He shows his madness for Malishka.

He tells that he is such crazy, that if he falls in love with Lakshmi, then he will never see Malishka again. He tells Malishka that he doesn’t love Lakshmi, else he would have not come to convince her with his love. Later, Lakshmi helps a poor lady and gets blessings in return. The lady blesses that Lakshmi’s husband lives a long life, he loves her a lot and blesses Lakshmi to soon have a child. Lakshmi turns shy. Karishma watches Lakshmi. She gets angered that Lakshmi is dreaming of a family with Rishi. She thinks Malishka won’t be able to do anything herself. She plans to destroy Lakshmi’s life. Keep reading.

Lakshmi tells Rishi that she is stopping the sunlight for him. He tells that she can’t stay like that all the time. He adds that he has many meetings lined up in the office. He wishes her happy new year and rushes to get ready. Kiran takes care of Malishka. She asks Malishka if she could sleep at night. Malishka expects Rishi’s call. She gets Viraj’s call instead. She answers in anger. He asks her if her mood isn’t good. She tells that she is fine. She disconnects before he could say anything. He calls Malishka again to cheer her up. Malishka rebukes him. Lakshmi also tries to call Malishka and get her welfare.

Viraj tells Malishka that he hates liars, he wanted to question her odd behavior. He seeks her help to manage his Dada ji’s event. Malishka blocks Rishi in her anger. She tells Kiran that Rishi has blocked her in his life. Kiran tells that Rishi loves her. Malishka tells that he doesn’t love her or care for her, he has totally changed. Rishi checks his files. He throws the wet towel on the bed in a rush. Lakshmi smiles that he didn’t change. He gets a love band, which reminds him of Malishka. He gets restless to speak to her. He calls Malishka, but fails to talk to her.

He cares for Lakshmi once again. He asks her to take rest. Lakshmi is happy seeing her care. Neelam asks Rishi to have breakfast before going to the office. Rishi tells that he is in real hurry. She doesn’t let him go without eating the food. She asks him to spare some time to attend a marriage function. Lakshmi secretly watches him and smiles. Shalu comes home to meet Lakshmi. Ayush bumps into Shalu. They have a funny banter.

She gets jealous when he enquires about Neha, and shows his interest in her. She questions him why does he want to know about Neha. He asks her why is she questioning him, what is their relation that she thinks she has a right on him. Shalu shies on his filmi question. Ayush asks her to smile and relax, instead taking his dialogues seriously. Ayush and Shalu have a moment. Shalu meets Lakshmi and finds her immersed in Rishi’s thoughts. Lakshmi just talks of Rishi. She tells that Rishi takes much care of her.

Shalu feels Lakshmi is really good that she can win anyone’s heart. Lakshmi feels she isn’t good, that she doubted Rishi to have an affair, she had hurt his heart. She tells that she was wrong, Rishi is devoted to her, he just has her in his life. Rishi arrives at Malishka’s house to confess his love. Ayush avoids Devika’s questions. Devika wants to know why was he flirting with Shalu. He asks her not to spread the false rumours about Shalu and him. Sonia gets their jokes.

She asks Devika not to push Ayush towards the low-class Shalu. She tells that Rishi married Lakshmi for a reason. She adds that her brothers respect women and never cross their limits. She rebukes Devika for her useless jokes. She doesn’t want Ayush and Shalu to become a couple. Malishka ignores Rishi. Rishi meets Kiran. Malishka wants to leave from the house. Rishi wants her to listen to him once. Kiran leaves them to talk. Malishka asks Rishi if he was missing her that he came to meet her.

Reviewed Rating for Bhagya Lakshmi 22nd November 2021 Written Update Rishi cheats: 3/5 This rating is solely based on the opinion of the writer. You may post your own take on the show in the comment section below.