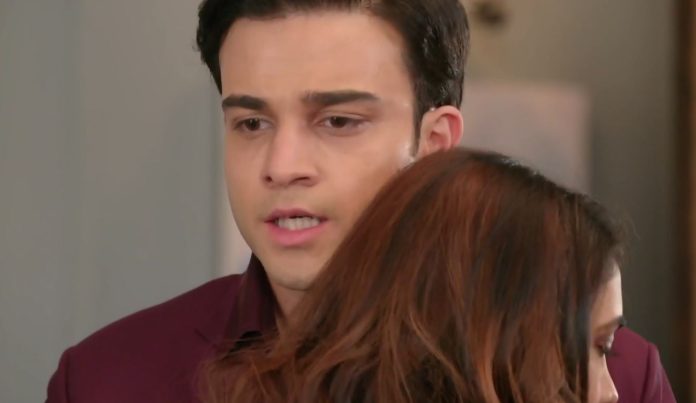 Kumkum Bhagya 24th November 2021 Written Update Ranbir proposes Rhea Siddharth tells Prachi that everything was planned, it was a conspiracy to show their relation as an illegitimate one to break off their legitimate relations. Prachi is shocked by this major revelation. She was cursing herself for the breakup. She fills up with rage on hearing about Rhea’s conspiracy. Siddharth tells that Kohli family wanted to get free from Prachi and him, that’s why they came up with this plan to throw them out of the house by staining their characters. She decides to not fall weak now and make her enemies succeed. Prachi gathers all her courage to fight back.

On the other hand, Ranbir proposes Rhea for marriage. She accepts the marriage proposal heartily, since she is really dying to marry him. Ranbir is shocked by Rhea’s consent. Ranbir takes this move when Rhea shows the video of Prachi and Siddharth to provoke him, and brainwashes him against Prachi once again. Ranbir decides to marry Rhea and move on in his life. Keep reading.

Earlier in the show, He reminisces Prachi and his moments. He vents anger on his staff for the romantic and unrealistic presentation. He doesn’t approve the unreal presentation. He names Prachi in anger. Sushma finds Prachi in tears. She asks Prachi why did she run away like this. She asks if Prachi really had an affair with Siddharth, why did she get scared to face Siddharth. Prachi tells that she was scared to face her past. Sushma tells that every girl undergoes such fears. She motivates Prachi to change the people’s perception about women and end all the fears. She explains Prachi that she has to keep fighting. She is glad that Pragya taught Prachi to become strong. She encourages Prachi to stand for her identity.

Sushma tells Prachi that she did the right thing to leave Kohli house and fight for her identity and esteem. She reminds Prachi that she left Ranbir and his family, but shouldn’t run away from her own self. She asks Prachi to face the world strongly, she isn’t wrong to run away, else everybody will suspect that Siddharth and Prachi had an affair. She asks Prachi not to get scared of Siddharth, he is also undergoing the same pain, he is also fighting with his life’s situation.

Prachi understands that Sushma is right. She tells that Siddharth came in front and reminded her the past. Sushma asks her to not let the past become her weakness, but her strength. She asks her to focus on her future, past will not come back. She wants to know how much pain will Prachi derive from one wound. She asks Prachi to learn a lesson from the past. She tells that she spoke to Siddharth and asked him how did he stay positive after so much wrong happened. She recalls what Siddharth told her, that he kept the negative people away from his life, Kohlis don’t exist for him anymore, he had divorced Rhea to end the bitterness and negativity.

Sushma finds Siddharth positive and strong-headed. She tells Prachi that she requested Siddharth to meet Prachi and help her move on. She wants Prachi to become strong like Siddharth. She asks Prachi to meet Siddharth for her sake. Prachi tells that Siddharth was her good friend. Sushma tells that he is still her good friend. Prachi thanks her. Sushma sends her to meet Siddharth. Ranbir comes home with a terrible mood. Rhea asks Shiv about Ranbir. Shiv tells that he heard Prachi’s name from Ranbir, he was very angry when he saw the presentation and left. He asks who is Prachi. Rhea tells that Prachi was the maid of the house. She worries that Ranbir is thinking of Prachi again. She wants Prachi to leave from Ranbir’s life. She wishes to find some way to get rid of Prachi.

Prachi meets Siddharth. She apologizes for running away in that way. Rhea’s friend spots Siddharth in the cafe. She sees him with Prachi, instead Rhea. She calls Rhea to inform her about Siddharth. She tells Rhea that she has seen Siddharth with someone special. Rhea wants to know who is that girl. Her friend makes a video call to show Prachi and Siddharth. Rhea is shocked to see Prachi with Siddharth. Siddharth tells that he didn’t imagine that Ranbir and their ties will end up so badly.

He tells that Ranbir broke all the relations and that too in a disgusting way by the dirty blames. Rhea asks her friend to keep the video on, she has to show it to someone else. She sheds fake tears and reaches Ranbir and Pallavi to show them Prachi and Siddharth. Prachi tells that she still missed their old days, everything was just perfect and caught the bad sight. She cries while missing Ranbir. Siddharth wipes her tears. Ranbir is shocked to see the moment between Prachi and Siddharth.

Rhea tells that Prachi and Siddharth are still together, they can announce their marriage and that they are so happy to enjoy their lives together. She adds that they didn’t even handle their broken relations till now. She cries that they both ruined Ranbir and her life. Ranbir is provoked. Siddharth feels sorry for Prachi when he hears her just talking about Ranbir. Prachi tells that she isn’t able to forget Ranbir at all. Siddharth asks Prachi not to run away from the truth. He encourages her to accept the truth. He tells that they are still friends, he is always there to help her cope up with the sorrow.

Rhea tells Ranbir that Prachi and Siddharth will never let them stay in peace. Ranbir recalls the ugly day when he caught Prachi with Siddharth. He vents his anger by breaking Rhea’s phone. She asks him if he vented his anger, she is also betrayed by her husband and her sister. She holds Ranbir responsible for her destruction. She tells him that he is at fault, he ignored her warnings when she senses Prachi and Siddharth’s affair. She emotionally blackmails him.

She tells that she got her entire life ruined, she has no reason to live her life, her own sister ruined her life and snatched her relations. She threatens of committing a suicide. She runs to her room. Pallavi and Ranbir get scared for Rhea. They run to stop Rhea. Rhea’s friend thinks Rhea needs her and decides to meet her. Siddharth consoles Prachi. She shares her sorrow to lighten her heart. He asks her to make her life easy by staying happy, then even her loved ones will be happy.

Consequently, Siddharth clears the facts to her. He tells her that Rhea isn’t a good sister, she is Prachi’s enemy. He tells that he will tell her the complete truth of Kohlis. Ranbir asks Rhea to stop. Rhea asks him to stop following her, she has no relation in her life, she has no reason to live. Pallavi asks Rhea to not think negative. Vikram and Dida find Rhea yelling and crying. Rhea tells that she trusted Abhi, then Ranbir and Prachi, but they all cheated her. She rebukes him for leaving her and marrying a cheat like Prachi. Ranbir asks her not to say anything about Prachi. Rhea asks him to have some shame if he can’t hear anything against Prachi. Ranbir gets threatened by Rhea’s mad rage. She swears to end her life. Ranbir is helpless to propose her and give her a reason to live. Rhea happily gets her wish fulfilled by the cunning suicide drama. Stay tuned.

Reviewed Rating for Kumkum Bhagya 24th November 2021 Written Update Ranbir proposes Rhea: 1/5 This rating is solely based on the opinion of the writer. You may post your own take on the show in the comment section below.