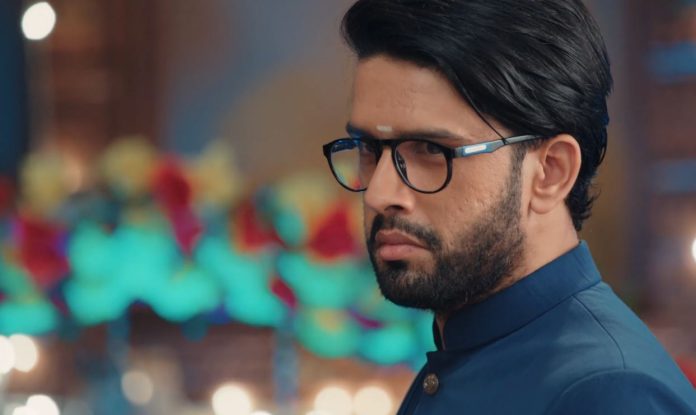 Yeh Hai Chahatein 23rd November 2021 Written Update Venky caught Prisha asks Rudra if he still thinks that Venky is hiding something. She doesn’t let Rudra explain and leaves angrily. Sharda asks Rudra to go and patch up with Prisha. Venky gets happy thinking that Prisha loves him a lot and trusts him. He thinks that only Prisha’s trust in him is helping him. Angry Venky thinks about why Rudra is behind finding out the truth. He thinks about why Rudra wants everyone to know that he got fully alright. Venky recalls that Rudra started doubting him since he saw his bracelet firstly on bed and then on his wrist.

Venky thinks Rudra is smart and is trying to find out his truth. He decides to beware of Rudra and not let him expose him to others. On the other hand, Rudra apologizes to Prisha and tries to reduce her anger. Prisha pushes him back and explains to him how much Venky matters to her. She explains to Rudra what she feels after getting her brother back after so many years of struggle and suffering. Prisha asks Rudra why Venky will lie about a Rubik’s cube? She tells Rudra that he hurt a lot. Prisha tells Rudra about how she and her whole family cried for Venky.

Rudra once again apologizes to Prisha. He explains to Prisha that he had no bad intentions, he just thought about their own well being. Rudra says to Prisha that he feels lucky and happy for seeing her happy and getting her brother back. He asks Prisha to give him any punishment. Rudra starts sit ups. Prisha finds Rudra’s gesture cute and stops him. She calls him naughty. Rudra jumps with joy and hugs Prisha. While hugging Prisha, Rudra apologizes to her in his thoughts and again thinks that Venky is hiding something. He decides to not hurt Prisha by talking anything about Venky.

Next morning, Prisha shows Vasudha, GPS and Sharda their function outfits. They get happy with Prisha’s gesture. Venky gives Prisha a pista (pistachio) rakhi that she used to make him wear on every Raksha Bandhan. He asks her to tell him why she used to make rakhi with Pista (pistachios) for him. Prisha gets emotional and replies to Venky that he liked pistachios. Venky reveals that he kept it safe with him to tie it on her wrist. Prisha asks why? Venky praises Prisha telling her that she fulfilled all his responsibilities behind his back and thus she deserves to get the Rakhi tied on her wrist. He explains that she suffered a lot and did a lot for family and one who protects deserves the Rakhi to be tied on their wrist. He calls Prisha a protector.

Venky ties Rakhi on Prisha’s wrist. Rudra feels happy seeing this. After sometime Mishka praises the decorations done for her marriage functions. She thanks Prisha and Rudra for their help, love and support. She gets excited seeing everything and tells everyone that it’s her dream coming true. She asks about her wedding lehenga. A woman brings her lehenga. Mishka gets angry at the woman for bringing a red lehenga. She says she ordered a fuschia pink lehenga and refuses to wear the red one. The woman says to Mishka that she ordered the lehenga in very less time and she could arrange the red one only. Sharda and Prisha try to make Mishka understand.

The woman tells Mishka that she arranged the red lehenga at the end moment only because she is Rudra’s relative. Mishka explains to Prisha and Sharda that dhe didn’t dream of red lehenga. Mishka apologizes and leaves upstairs. Rudra asks the woman to leave the red lehenga at his home only. Rudra says he will try to arrange something. Sharda sees Mishka upset and tries to cheer her up and asks her to get ready for her mehndi function. Rudra makes Mishka happy by showing her a Fuschia Pink lehenga. She hugs Rudra with excitement. Mishka tells Rudra that he gave her the best gift. She calls Rudra the best. Rudra asks Mishka to explain this to Prisha. Prisha teases Rudra on this.

Mishka dances in happiness and says she will get ready in two minutes. Everyone asks her to get ready as soon as possible. Venky feels angry seeing Mishka happy with Prisha and her family. Make up artist completes Mishka’s make-up. Mishka gets an interview call from a magazine about her marriage with Param. The person on the other side of the call tells Mishka that he can’t hear her. Mishka goes outside and the call gets disconnected. She feels a little weird but goes back to get ready for her mehndi function. Mishka returns to her room and gets shocked to see her (outfit) ruined. She shouts and cries seeing her ruined outfit.

Prisha, Sharda, Rudra, GPS, Venky and Vasudha reach Mishka’s room hearing her cries. They too get shocked seeing Mishka’s outfit ruined. Mishka tells everyone that she went out of the room to receive a call and saw a ruined outfit after returning. Prisha says someone deliberately ruined Mishka’s outfit. Rudra says it’s someone who hates Mishka and doesn’t want her happiness. He continues saying that someone wants to take revenge from Mishka. Prisha agrees to Rudra’s thoughts. Rudra says he will find out who did this? Venky feels a little scared. Everyone thinks what will Mishka wear now. Prisha calms Mishka and makes her understand that her real happiness is to marry Param.

Prisha tells Mishka that she understands that a wedding outfit is every girl’s dream. She makes Mishka understand that Param is most important to her. She explains to Mishka that her dream is to marry Param and a dream can be fulfilled in other ways too as the most important thing is to fulfill dreams. Sharda and Rudra explains Mishka the same thing to Mishka. Mishka finally gets convinced to wear the red lehenga. Everyone leaves to let Mishka get ready. Venky thinks he will not let Mishka be happy. He recalls how he used GPS’s phone with a secret app to make a fake interview call to Mishka and fool her. Venky also recalls ruining Mishka’s wedding outfit to ruin her dreams.

He thinks that he will later throw the scissor he left in Mishka’s room that he used to ruin Mishka’s wedding outfit. He feels happy ruining Mishka’s happiness. Venky decides that he will not let Mishka get any happiness. In the next episode, Rudra will check the CCTV footage and get the scissor through which Mishka’s wedding outfit was ruined. He will get shocked to see that Venky is behind Mishka’s happiness and plotting against her.

Reviewed Rating for Yeh Hai Chahatein 23rd November 2021 Written Update Venky caught: 5/5 This rating is solely based on the opinion of the writer. You may post your own take on the show in the comment section below.