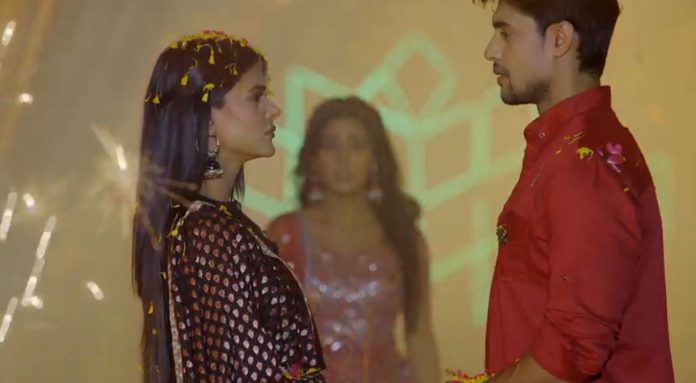 Udaariyaan 24th November 2021 Written Update Tejo loves Fateh Fateh and Tejo come together under the floral shower. Jasmin is left shocked seeing them sharing an intense romantic eyelock. Fateh holds Tejo and seems to go lost into her eyes. Its Jasmin’s wedding day. Tejo is faking her engagement with Angad, and Jasmin is aware of the truth. She goes to confront Tejo about her love feelings for Fateh. She gets into an argument with Tejo, which leaves Satti worried. Jasmin asks Tejo to admit that she has planned the entire engagement drama just to win back Fateh.

She probes Tejo to make her spill the truth that Tejo still loves Fateh. Tejo angrily blurts the truth. She cries and confesses that she loves Fateh. Jasmin and Satti are the two who hear this and are shocked, but somewhere they both knew it that Tejo has feelings for Fateh. Satti wants Tejo to move on with Angad. Jasmin knows that Tejo can never move on, because she is still chasing Fateh. Satti is tensed on hearing the arguments. She wishes Tejo to forget Fateh, knowing Jasmin will never free Fateh from her selfish love. Satti hates Jasmin even more knowing Jasmin is knowingly snatching Tejo’s happiness. What will be Fateh’s decision on his wedding day? Will Tejo accept Fateh if he returns to her? Keep reading.

Earlier in the show, Angad brings Tejo and Fateh together for the game round. He asks them to dance together. Fateh and Tejo have a dance together and look really happy. Jasmin is insecure, while their smiling faces give a hope to Khushbeer and Gurpreet. Angad finds Jasmin burning with jealousy. He stops her from interrupting them. He tells that Fateh will just dance on Jasmin’s fingers after the marriage. Jasmin wonders if Angad is helping Tejo win back Fateh. She suspects Tejo and Angad’s intentions, when she finds Tejo getting close to Fateh.

Tejo and Fateh have the strange chemistry of love and the pain of separation, both flashing in their eyes clearly to Jasmin and also the elders. Jasmin goes insecure seeing them, while Khushbeer gets high hopes seeing the love in Fateh’s eyes. He knows that his son is really into love, but not able to accept it himself. He feels dutiful to make Fateh realize that. Tejo rushes to have a glass of water. Fateh leaves from there. Jasmin stops Tejo and spills some cold drink on the latter’s dress intentionally. Jasmin apologizes falsely and sends away Tejo for cleaning the dress.

Tejo goes to her room and cleans her dress. She gets to see Jasmin and her old picture there. She reminisces about the happy childhood spent with Jasmin. She didn’t expect their lives and fate to take such a turn that their sisterly bond got completely destroyed. Tejo misses the old Jasmin. She knows that Jasmin has gone too far from her relations by choosing the wrong path and may never come back to their old terms. Tejo cries while thinking of Jasmin. Jasmin arrives there and starts yelling at Tejo for her attempt to snatch Fateh from here once again. She asks Tejo if she wants Fateh.

Tejo calls it nonsense. Jasmin tells that it’s the truth, Tejo had plotted to summon Fateh and her home by sending Angad. Tejo tells that she didn’t plan any such drama. Jasmin confronts her big plan of faking the engagement. She tells that she has been keeping a watch since some time and got to know everything. She wonders why Angad is helping Tejo. She reminds Tejo of the deal with Khushbeer that the entire family will attend the marriage if she gets engaged to Angad, but questions Tejo about her real motive. Tejo gets angry at her. Jasmin wants her answers.

She doesn’t want Fateh to know anything, and get back to Tejo with the sobbing tears. She adds that she is really happy that Fateh believes Tejo is moving on. Jasmin tells Tejo that she knows the truth about the fake engagement. Tejo is moved on realizing that her plan is already known to Jasmin. Jasmin accuses her for planning everything just to win Fateh. Tejo denies the accusations. Jasmin asks her the reason for the fake engagement with Angad. Tejo tells her that she would have explained the reason to Jasmin, but the latter won’t be able to understand, because of a lack of good heart.

Tejo asks Jasmin to stop the blames. She reminds Jasmin that they are sisters sharing the same blood. She shows her their happy picture and asks her to show some respect towards their bond. She tells that they loved each other so much that the people used to give their example to others. She tells Jasmin that she isn’t her enemy. She adds that Jasmin can forget their bond, but she can never forget it. She tells that she is angry on Jasmin, but doesn’t hate her. Tejo really cares for Jasmin’s happiness.

Jasmin doesn’t believe her. Jasmin tells that Tejo deliberately kept the function just to ruin her marriage functions. Tejo tells that Khushbeer wanted to keep the engagement on the same day. Jasmin asks her to stop the greatness drama for once and all. Tejo tells that she is doing this for her own happiness and freedom. She wants to go away from Fateh and Jasmin’s lives. She is tired of the blames.

Satti happens to come there. She overhears their argument and cries. Jasmin asks her not to fool her and admit that she still loves Fateh. She probes Tejo to confess her feelings. Tejo shouts that she loves Fateh. She adds that she will never accept Fateh in her life, after remembering the wounds he has given to her. She can’t forget his betrayal. She doesn’t think Jasmin can understand this when she can’t understand Fateh and her own love. She wishes Jasmin forgets her selfishness and really falls in love with Fateh, who deserves true love.

Tejo goes away and sheds tears, while Satti reaches here and pacifies her. She testifies that Jasmin won’t change until she gets a major hit from her fate. She asks Tejo not to hurt her heart because of Jasmin. Fateh finds Tejo crying again. He doesn’t learn the matter about Jasmin’s taunts. Jasmin finds Fateh still concerned for Tejo. She takes Fateh with her.

Later, Jasmin gets busy with the marriage arrangements. Jasmin gets to see her friends back. She tells them that they could come because of the elders blessing the marriage. She asks Sweety who called them home. Fateh tells that he called her friends for the sake of her happiness. Sweety calls Jasmin really lucky to get someone so loving like Fateh. Jasmin really feels lucky. She tells that she even loves Fateh. She asks Fateh to get ready for their marriage. She wants to look like the perfect bride when she makes a grand entry with Fateh and stands under the floral shower.

He asks her to not have any worry, he will set everything. She soon gets busy. She asks Sweety to help her and keep an eye on Tejo. She suspects that Tejo will come and sit in the mandap to marry Fateh. Sweety asks her to not think much, Tejo will be getting engaged to Angad. Jasmin stays stressed. She wishes to tell someone about Tejo’s fake engagement plan. Meanwhile, Fateh checks the arrangements of the floral shower as Jasmin wants. Tejo returns home from the parlor. Simran tells that Tejo thinks of everyone but doesn’t get anyone’s love in return. Tejo tells that she will still continue to think of everyone’s betterment. She walks inside the house.

Fateh is mesmerized to see her. Simran tells that everyone is eager to see Tejo. She asks Tejo to take some rest until Angad comes with her engagement dress. Fateh tries to talk to Tejo. Tejo passes by, and gets her dupatta stuck to his watch. They get into a romantic moment unplanned when the floral shower starts for them. Jasmin has planned the floral shower entry with Fateh. She comes there looking for Fateh. She finds Fateh and Tejo sharing a moment and locking eyes. She realizes that Tejo has taken her place. She gets so frustrated that she beats up the decorator for the mistake.

She tells him that he ruined her grand entry by seeing a random person. Fateh and Tejo try to calm down Jasmin. Jasmin accuses Tejo for having a bad intention of breaking her marriage. She goes mad in rage and yells at Tejo. Fateh turns upset and sympathizes with Tejo. She humiliates Tejo in front of Fateh and the Virk family. She angrily gets a water bowl to splash it on Tejo and ruin her day. Angad comes in time and stops Jasmin. He tries to calmly handle the tense situation, but Jasmin rebukes him as well. Fateh tries hard to control Jasmin. He takes away Jasmin, while Angad makes Tejo smile by his charm once again. Keep reading.

Reviewed Rating for Udaariyaan 24th November 2021 Written Update Tejo loves Fateh: 4/5 This rating is solely based on the opinion of the writer. You may post your own take on the show in the comment section below.