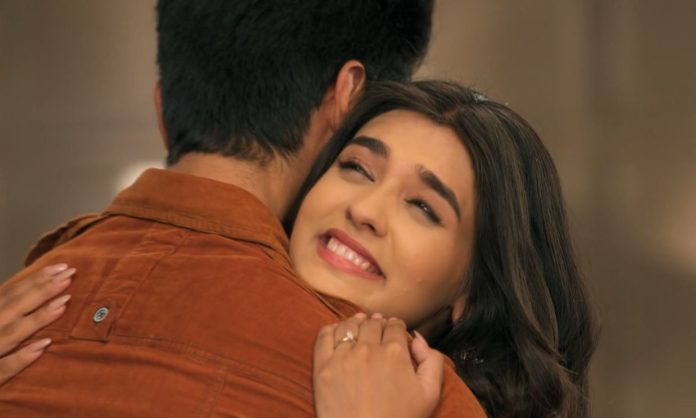 Yeh Rishta Akshara love confession 23rd November 2021 Abhimanyu is seen getting ready to meet Akshara. He sees Akshara outside his room door. She asks him if she can come inside. He allows her inside his room. She asks him if she can see his room? Akshara sees Abhimanyu’s room and says she doesn’t like the almirah, music system and dark colours of the room. Abhimanyu grabs her in his arms and says that he will change everything once she enters his life. They stare at each other and dream about living with each other. Abhimanyu dreams of Akshara waking him up in the morning by opening the curtains. Next they are seen having romantic moments in different outfits inside Abhimanyu’s room. In this dream they are seen romantic and enjoying small and beautiful things of a couple’s life and romance.

Suddenly, Abhimanyu comes out of his dreams. He feels Akshara will soon come into his life, home and near him. Akshara is seen drying her hair. Next Anand is seen asking Harshvardhan to close Goenkas topic. He also says to Harshvardhan that they should cancel Aarohi’s internship to avoid further troubles in future. Mahima says Abhimanyu will never agree as he loves Akshara a lot. She says Abhimanyu handled Aarohi’s case for Akshara only. Parth agrees with Mahima. Neil says they didn’t understand Abhimanyu’s feelings earlier too. Harshvardhan scolds Neil and asks if he truly understands Abhimanyu’s feelings.

Harshvardhan says once Akshara confesses her love for Abhimanyu, he will even apologize to Goenkas to get Abhimanyu married to Akshara. Abhimanyu says he will bring Akshara today itself and she will confess her love for him in front of everyone. He says he will return with Akshara. Abhimanyu leaves to bring Akshara with a big smile and happiness on his face. Mahima smiles, while everyone else in the Birla family feels nervous. Akshara reads someone’s message with weirdness. Abhimanyu reaches there and takes her with him on his bike. Akshara shyly puts her hands on Abhimanyu’s shoulder. He asks her to sit carefully as he will drive fast.

He feels happy to have Akshara with him. On the other side, Birlas wait for Abhimanyu. Parth feels tense. Neil tells him that he messaged Akshara about whatever happened at their house. Flashback shows Akshara reading Neil’s message before Abhimanyu took her. Neil explains he told Akshara everything because she should know everything before Abhimanyu brings her to Birla mansion. He also tells Parth that he didn’t want Kairav and Vansh to create a scene. Anand asks why are conditions being kept in a marriage alliance. Mahima says this happens in love marriages. She smiles and wishes/hopes to get Akshara as Abhimanyu’s wife.

Anand says if Goenkas arrives with baaraat? Harshvardhan says he has decided that he will not close the matter till he gets to know about Akshara’s feelings for Abhimanyu. Manjari wishes to God to handle everything. Parth and Neil calm Manjari. Abhimanyu reaches Birla Mansion with Akshara. Mahima hopes that Akshara agrees to marry Abhimanyu. Akshara asks Abhimanyu if this is his home. Abhimanyu replies not only to him, but to their home. Both Akshara and Abhimanyu enter the mansion. Akshara feels a little scared of Harshvardhan before entering Birla house.

As Akshara steps inside the Birla house, Anand receives a message that his long pending case got solved. Akshara greets everyone, “Namaste”. Abhimanyu says to Akshara that many things happened between them and their families. He tells her that he wants to clear and finish every issue. Abhimanyu tells Akshara that he understands that she would have been forced in some way to remain silent on tilak day, either for Aarohi or family’s respect. He tells Akshara that they can’t ruin their relationship to keep alive someone else’s false hope. Abhimanyu further asks Akshara to tell everyone about her feelings for him. He requests her to accept her love for him.

Abhimanyu tells Akshara that his father promised to get him married to her soon, if she accepts her love for him. Manjari also asks Akshara to reveal her true feelings. Akshara feels nervous. She recalls whatever happened at the tilak ceremony. She apologizes to everyone for remaining silent during tilak ceremony day. She says that she was in a dilemma because at one side she saw her sister and on the other side both Goenka and Birla family.

Reviewed Rating for Yeh Rishta Akshara love confession 23rd November 2021: 5/5 This rating is solely based on the opinion of the writer. You may post your own take on the show in the comment section below.