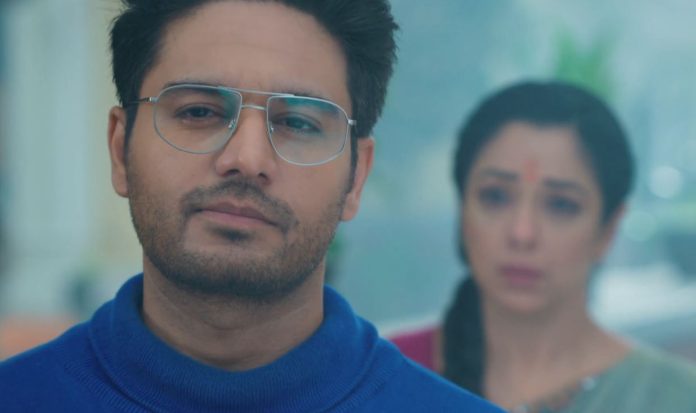 Anupama 24th November 2021 Written Update Anupama in love Hasmukh tells Anupama that Anuj and Anupama have a right to stay happy, Anuj’s love is really selfless, he is like Kanha’s blessing for her. He tells that he has seen it well, that Anuj and Anupama are made for each other, she is Radha and Anuj is Krishna. She asks Anupama to let Radha and Krishna unite in this era. Anupama is shocked. Hasmukh does her tilak and asks her to go to Anuj. Anupama walks with the Krishna Jhanki. She finds Anuj praying there. Anuj is waiting for her. He asks Anupama if she is coming with me. Anupama feels Anuj’s selfless love for the first time. Hasmukh goes back home.

Anupama recalls the time and moments spent with Anuj. Ek Duje Ke Vaaste song plays in the background. She is troubled by the feeling. Anuj asks her is she okay. He encourages her to be positive, the things will fall into the place. He tells that the Shah family is still united, she can come to meet them and keep them together. He advises her to think about herself. He tells that he has no right to guide her, but he wants her to not forget herself. He feels sorrowful when she is sad. He tells that his world sinks in sorrow seeing her upset face.

He asks her is she staying back with her family or coming with him. Anupama rethinks her life. She tells that she is coming with Anuj. Anuj treats her nicely as always. He takes her home. He finds her behavior little odd. He doesn’t understand what she is thinking. Vanraj stays really frustrated. He meets his own self. He dreams to become a business tycoon and define his success. He wants to earn back everything he had lost.

He has to cross a long journey in a short time by doing anything. He determines to settle scores. Anuj drops Anupama home. He asks her to forget whatever happened. He reminds her about the important meetings lined up. He tells that her mood might be mood, but she can’t avoid the meetings. He wants her to be at the office on time. Anuj leaves Anupama to think further about their relation.

Samar informs Anupama about Leela’s sickness. Anupama runs towards the Shah house. She tells Vanraj that Leela isn’t well. They rush inside the house to see Leela. The family calls a doctor for Leela. Doctor tells them about Leela’s high BP due to stress. She asks the family to look after Leela. Anupama stays with Leela. Leela apologizes to Anupama. She tells that she wants to talk to her family. She asks Kavya to leave. Kavya argues with Leela and asks her how can she make her out and talk to a stranger, Anupama. Vanraj commands Kavya to leave and obey Leela.

Anuj feels Anupama’s behavior was something strange, like she is feeling different, despite the problems in her life. He thinks of Anupama. Leela tells that she has insulted Hasmukh a lot, and really regrets a lot for insulting the family’s love. She didn’t mean to make them cry. She tells that her sin has ruined every good deed she did till now. She apologizes to them. Anupama and Vanraj ask her to forget everything. Leela can’t forget that Hasmukh got shattered because of her. She regards herself an enemy of her own family. Anupama forgives Leela. Leela accepts that she has done wrong with Anupama till now.

Anupama asks Leela to correct herself now. Leela agrees to listen to her. Anupama wants her to forget everything. Leela asks Anupama to accept her condition. Anupama is tensed to know the condition. Next, Anupama and Kavya get into an argument. Kavya humiliates Anupama, but gets a befitting reply. Vanraj tells Anupama that he doesn’t love Kavya any more. He determines to become a winner from a loser once again. He seeks Anupama’s help. What will Anupama do for Vanraj? Keep reading.

Reviewed Rating for Anupama 24th November 2021 Written Update Anupama in love: 3/5 This rating is solely based on the opinion of the writer. You may post your own take on the show in the comment section below.