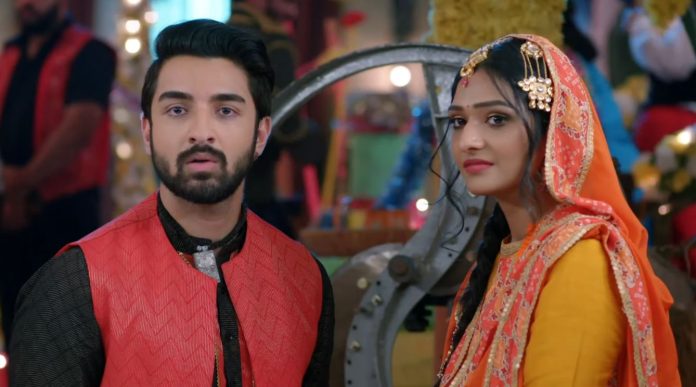 Bhagya Lakshmi 25th November 2021 Written Update Heer Ranjha Rishi and family get ready to attend a relative’s wedding. Rishi doesn’t want to go but agrees on Neelam’s insistence. The entire family get dressed in traditional get ups. Lakshmi becomes the Punjabi Heer. Rishi is mesmerized on seeing her. He tells that she looks beautiful as Heer. Lakshmi thanks him for the compliment. Rishi takes the Ranjha look. At the wedding, Ayush and Shalu also come close. Rishi, Lakshmi and Malishka perform in the wedding. Malishka finds Rishi getting closer to Lakshmi. She leaves in a huff.

Kiran stops Malishka and asks her to do something before she loses him completely to Lakshmi. She tells that Rishi will fall in love with Lakshmi, his heart will stop beating for Malishka completely if she doesn’t do anything. Malishka tells that she knows what she should do to get her Rishi back. She cries in front of him and goes. Rishi pays attention to Malishka. Lakshmi finds Rishi upset.

She tells that she knows what’s going on between Rishi and Malishka, that’s because of her. She feels responsible for their friendship’s breaking. She tells that she has come in Rishi’s life, and that’s the reason Malishka is insecure to lose her friend. Rishi lets Lakshmi assume things. He can’t tell her the truth that he loves Malishka. What will Malishka plan? Keep reading.

Earlier in the show, Lakshmi is happy to see Rishi. She feels he does a lot for her and loves her a lot, she is special for him. Rishi also thinks she is special for him. He likes to see her smile. She feels she got a good partner, Rishi is a blessing. Sudeep thanks Rishi for bringing back Lakshmi’s smile, she is happy again. Rishi likes the food prepared by Lakshmi, which surprises Neelam and the entire family. Lakshmi is also surprised that Rishi has changed his choice. Rishi tells that he doesn’t have any allergy now. He praises Lakshmi.

Karishma finds Rishi and Lakshmi sharing an eyelock. She doesn’t want Rishi to realize his love for Lakshmi. Ayush drops Rano and Shalu home. Rano wants him to come home and meet Neha. Shalu asks him to go. Ayush tells that he will meet Neha and go. Shalu doesn’t want him to get trapped by Neha. Malishka comes home and meets the family. Lakshmi asks Malishka if she is okay. Malishka tells that she is doing good. Lakshmi tells that they just had dinner. Dadi praises the food made by Lakshmi.

Ayush tells Neha that Rano saved him. Shalu tells about Ayush and the constable’s argument. Neha takes Ayush’s side and scolds Shalu. Rano asks Shalu not to get close to Ayush. She lectures Shalu. Shalu gets upset. Ayush asks Rano to forgive Shalu and not scold her so much. Ayush teases Shalu and leaves. Malishka tells that Rishi left her in an important meeting and left for home to meet Lakshmi. Viraj arrives there to meet them. He hopes that Malishka would have apologized to come back in their lives suddenly. He jokes that he took their permission to come. He invites them in his Dada ji’s birthday. He asks the family to please come. The family agrees.

Neelam tells that they have committed to attend a marriage. She doesn’t want to skip the marriage. Viraj asks some of them to come, his Dada ji loves the Punjabi culture. Neelam apologizes. Viraj tells that Rishi and Lakshmi can come in the party. Neelam agrees to send Rishi, Ayush and Lakshmi. Viraj thanks her for permitting them. Malishka tells that its a theme party, they have to dress up as movie characters. Viraj and Malishka leave. Lakshmi suggests Heer Ranjha getup to Rishi.

Dadi finds Karishma staring Lakshmi. She doesn’t want Karishma to do wrong. Karishma tells Sonia that Lakshmi will make Rishi Ranjha, but they won’t let this happen. She asks Sonia to plan something to damage Lakshmi’s dress. Sonia tells that Malishka will become Rishi’s Heer. Malishka returns home. She tells Kiran that she will get mad seeing Rishi going to Lakshmi.

She asks Kiran to make Malishka dress up as Heer. She wants Rishi and Malishka to feel their love. Rishi and Lakshmi try their outfits. Lakshmi tells that Heer and Ranjha are unique. She sees her dress damaged. She is shocked to see it. She thinks how did it get torn on its own. Karishma and Sonia had damaged the dress. They reach Lakshmi to fake their help. They ask Lakshmi to get ready fast, else Rishi will get late. They don’t think Lakshmi will have any dress for Heer’s getup.

Rishi goes out to wait for Lakshmi. Kiran and Malishka look for Viraj and his Dadu. Viraj welcomes them. He tells that his Dadu will take time to get ready and make a grand entry. Viraj’s Dadu arrives. They talk to Dadu. Dadu asks about Kiran’s husband Abhay. Kiran tells that she got divorced to Abhay. Viraj shares a laugh with them. Kiran gets to see Abhay in the party. Keep reading.

Reviewed Rating for Bhagya Lakshmi 25th November 2021 Written Update Heer Ranjha: 3/5 This rating is solely based on the opinion of the writer. You may post your own take on the show in the comment section below.