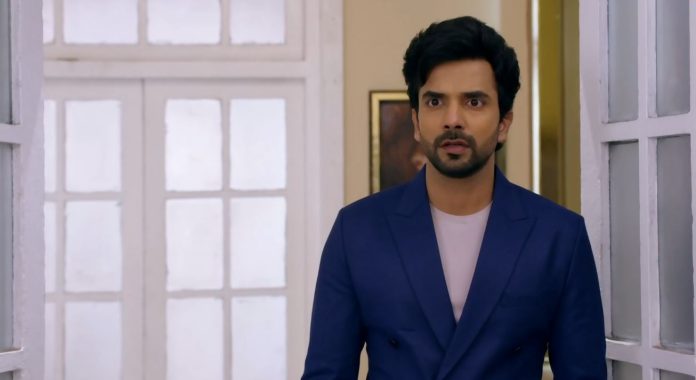 Kundali Bhagya 25th November 2021 Written Update Rishabh exits Sherlyn goes to meet Prithvi. She tells that she lost a good bahu tag, she had told the truth of their affair to Rishabh. He asks her what did she tell Rishabh. She tells that she told Rishabh that she just loves Prithvi, it was their baby, not of Rishabh. He asks her if she is joking. He rebukes her for ruining everything by her own hands. He tells that he planted her in the Luthra house to ruin them. She tells that he ruined her life. She counts her favors on her. She asks him not to insult her and just help. He tells that he isn’t outside and free to help her. He makes her understand her mistake. She tells him that Rishabh got to know her entire truth. Prithvi suggests her to pack her bags and leave the Luthra mansion.

Shockingly, Rishabh doesn’t expose Sherlyn’s truth and comes in her words once again. He fears to tell the truth to his family. He seems to leave the house and not reveal anything. Preeta and entire family try to stop Rishabh and reason out his decision. Preeta questions Sherlyn to know what exactly is the matter. Sherlyn didn’t expect Rishabh to leave the house. She wonders if he is really leaving the house or going to oust her. She stays confused and speechless. She gets questioned by the family. What will be Sherlyn’s next move when she finds Rishabh clearing her way on his own? What will happen next if Rishabh exits from the house? Keep reading.

Prithvi and Sherlyn blame each other, and argue. She tells him that he is already in jail, but now she will be targeted. She tells that Luthras will insult her a lot, especially Preeta. She cries in tension. He asks her to pack her bags and leave the Luthra house, leave that family and shock them, before Rishabh exposes her and throws her out of the house. He asks her to go, else she will ruin both of them together. Sherlyn takes his advice and goes to the Luthra house. She thinks he is right. Rishabh packs his bags and leaves like a coward. Preeta, Kareena and Rakhi try to ask him the matter.

He knows Sherlyn is so evil, even then he decides to keep silent and leave the family at her mercy. The family asks Rishabh to answer them. Sherlyn thinks it will be her last day in the house if Rishabh tells the truth. She is shocked to see him leaving the house. Preeta asks Sherlyn why did Rishabh leave the house. She asks if they had a fight. Rakhi wants to know what’s the matter. Sherlyn realizes that Rishabh didn’t tell them anything. She asks if Rishabh didn’t tell them anything. Preeta tells that Rishabh told about a crisis in the London office, but the truth is someone else, he didn’t wait for Karan’s homecoming and left all of a sudden.

She asks Sherlyn what’s wrong that he left this way. Sherlyn tells that she doesn’t know anything. Rakhi and Kareena also know that something is wrong else Rishabh would have not left them by not listening to anyone’s call. They wonder that Rishabh is in some big trouble. Sonakshi tells that maybe Rishabh really went to handle the business crisis. Sherlyn is relieved that Rishabh is finally gone. She gets to see the cupboard empty. She rejoices that Rishabh really left. She thinks why didn’t he oust her and decide to leave the house. She thinks its the effect of her threatening that he kept the secret to himself.

She tells that Rishabh didn’t look at her while leaving, because he is hurt by her bitter words. She feels her life is sorted, that she didn’t get exposed in front of Luthras. She happily dances, and gets seen by Preeta. Preeta asks her why is she happy when Rishabh left the house with tears in his eyes. Sherlyn asks if she should die for this. She argues with Preeta to stop her from mind-reading. She tells that she is really upset and worried for Rishabh. Preeta knows that Rishabh and Sherlyn had a fight, else he would have never left this way. She tells that she will ask Karan to talk to Rishabh, and not spare Sherlyn if she is at fault.

Sherlyn apologizes to get rid of Preeta. She tells that she was loving Rishabh and trying to mend their relationship, but she doesn’t know why Rishabh left. She tells that she is also unaware of his decision to leave. Preeta tells that she so wishes that Sherlyn is saying the truth. Sherlyn wants Preeta to stop interfering in her matters. On the other hand, Sonakshi wants to cut down Preeta’s wings and stop her from soaring high. Bani pacifies Rakhi, who is crying for Rishabh. Rakhi tells that she trusts Rishabh a lot, he never does anything without asking her, but today he left the house without saying a word to her.

Sonakshi fakes her tears. She tells that she can see Rakhi’s love for Rishabh, Rakhi can express it, but she isn’t a lucky mother to have a bond with Pihu. Kareena and Bani ask Sonakshi to express her love to Pihu and spend time with her. Sonakshi is glad. She doesn’t think Rakhi will understand her feelings. She tells that Pihu is a little girl, who needs a mother and mother’s love. She tells them that Preeta is Pihu’s mom now, but she is too occupied with her household work, she isn’t able to give much time to Pihu, Preeta is more concerned for Rishabh and neglected Pihu once again.

She tells that Pihu shouldn’t ask for love, Preeta should love her before she asks for it. She aks Rakhi to understand her concern, like Rakhi worries for Rishabh, same way she/Sonakshi worries for her daughter Pihu. She tells that Pihu needs Preeta, Preeta should be with her than handling the house tensions. Kareena understands Sonakshi’s words. She asks Preeta to focus on Pihu, who needs her. Bani asks Preeta to give time to Pihu. Kareena tells that they will solve Rishabh and Sherlyn’s relationship.

She asks Preeta to just look after Pihu, else Sonakshi will take care of Pihu, because she is Pihu’s real mother. She asks Rakhi not to stop her this time. Bani asks Rakhi to go to Mahesh and handle him when he knows the truth of Rishabh’s leaving. She asks Kareena to be with Kritika. Preeta gets upset. Bani tells that Preeta is a caring girl and looks after everyone, but from she will pay more attention to Pihu. Preeta asks Sonakshi did anything happen. Sonakshi tells that she doesn’t know anything. Preeta weeps.

Reviewed Rating for Kundali Bhagya 25th November 2021 Written Update Rishabh exits: 3/5 This rating is solely based on the opinion of the writer. You may post your own take on the show in the comment section below.