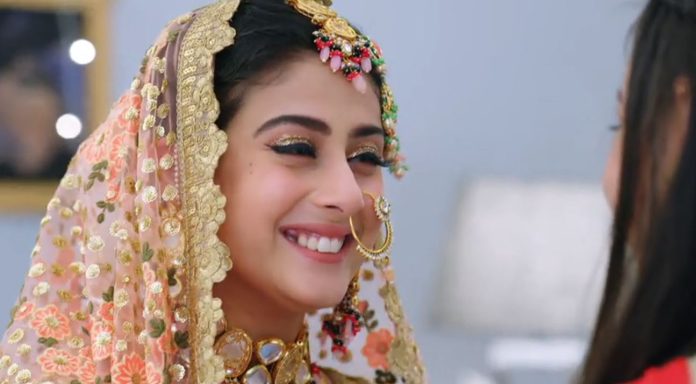 Udaariyaan 27th November 2021 Written Update Love test Jasmin makes a grand entry in her marriage. Fateh sits in the mandap and waits for Jasmin. He gets to see her rocking entry, while she dances and comes to her groom. Virks and Sandhus dislike Jasmin, and don’t like her unrestrained behavior. Mahi overhears Jasmin’s talk with her friends. She is shocked to know that Fateh and Jasmin are going to Canada after the marriage. She goes to tell Khushbeer, Gurpreet and Simran that Fateh is taking Jasmin to Canada on the next day of their marriage.

Khushbeer can’t believe that he is going to lose his son to the evil Jasmin’s fake blind love. He gets depressed, and so does Gurpreet. Tejo is broken down and much affected by Jasmin’s revelation. Angad reaches Tejo and finds her crying. He asks her who has hurt her now. Tejo tells him about Fateh and Jasmin leaving for Canada. She tells that she doesn’t want to stay with the families now. She wants to go afar where nobody knows her name and identity. She asks Angad to help her and take her away.

Gurpreet confronts Fateh and asks him if he is leaving for Canada tomorrow. Fateh didn’t wish any tension and drama during his marriage with Jasmin. He gets speechless. Gurpreet understands his answer. Fateh will be faking the marriage and also the Canada trip to put Jasmin’s love to test. He gives Jasmin an ultimatum and asks her to choose between Canada and him. He tests her love and asks her to prove that she only loves him, above any of her dreams and desires. Fateh’s surprise will leave Jasmin shocked. What else did Fateh plan? How will Fateh do justice with Tejo? Where does Angad stand between this entire drama? Keep reading.

Tejo is broken by the news of Fateh’s forever departure. She didn’t think that Jasmin hates her so much that she would never like to see her face. Tejo cries a lot thinking of Fateh. Fateh waits for his bride in the mandap. Angad asks Jasmin’s friends to get her. Jasmin dances all the way to the mandap. She seems very happy. She sits in the mandap. Virks and Sandhus aren’t happy. Sweety tells that Fateh is taking Jasmin to Canada, and he will be away from Tejo forever. She is happy for her friend. Angad and Mahi hear this shocking news. Mahi goes to inform Khushbeer and Gurpreet that Fateh is leaving tomorrow with Jasmin for Canada, she just heard Sweety telling this.

Khushbeer is ashamed of his son. Gurpreet tells that Fateh has really lost his mad. Simran tells that Jasmin maybe lying, else Fateh would have told them about the Canada tickets. Fateh and Jasmin perform the marriage rituals, while Tejo sheds tears seeing Fateh and her marriage pictures. The marriage flashes in her eyes. Angad knows that Tejo is really disturbed. He reaches her to give her some solace. Angad lovingly wipes her tears and hugs her. Tejo shares her pain and sorrow over Fateh’s leaving. Angad tells that he knows it well that she is crying for Fateh and Jasmin’s leaving.

Tejo tells that she shouldn’t care for them, but still she is getting so influenced by the news. She feels painful that she can’t see Fateh again. Simran performs the Gathbandhan for Fateh and Jasmin. Tejo tells Angad that she wants to go somewhere afar where nobody knows her name. Angad asks Tejo to take his help, because they are friends. He wants a chance to keep his friendship. She tells that even Fateh was her friend. He tells that he isn’t Fateh and his friendship isn’t so weak. Fateh and Jasmin are asked to take the wedding rounds. Gurpreet reaches him to stop.

She asks him about his Canada tickets. She asks if he is really going to Canada tomorrow. She tells that Mahi heard Sweety telling this. Fateh realizes that Jasmin didn’t keep his request and broke out the news. Fateh tells that he will talk to her later. Gurpreet asks him to just give an answer. He replies with a yes. She is disheartened that Jasmin is snatching her son forever. Fateh didn’t wish to hurt his family. He realizes that Jasmin is the reason for their sorrow. Simran asks Gurpreet is Fateh confirmed the news. Gurpreet tells that its really true. Khushbeer controls his rage and watches Fateh and Jasmin take the wedding rounds.

He tells that he is ill-fated to get a son like Fateh. He asks Gurpreet to forget that Fateh is their son. Nimmo congratulates Rupy and Satti. She tells them that Jasmin’s dream got fulfilled, she is leaving for Canada tomorrow with Fateh. Rupy thinks this news will shatter Tejo. Angad asks Tejo to cry and vent out the pain. He knows the pain of losing someone. He tells that he wants to take her away from this place and the pain. Fateh and Jasmin get married by fulfilling the mangalsutra and sindoor rituals. Jasmin congratulates Fateh. She tells that their life will have a new start now.

He tells that it will be really a new start with his surprise coming. Angad asks Tejo if she trusts him. Tejo tells that she trusts him. Angad asks her not to show her tears to anyone else. He tries to make her smile. Angad consoles Tejo. Khushbeer tells Gurpreet that this had to happen some day, because Canada is Jasmin’s dream. Virks confront Fateh for hiding about Canada trip. They rebuke Fateh for his big mistake. Simran asks Fateh why is he leaving the family when they have come to bless them in the marriage. The family doesn’t want him to leave the house.

Jasmin tells that Fateh won’t cancel the tickets now. Fateh tells that he had promised Jasmin that he will take her to Canada and fulfill her dream. Gurpreet tells that Jasmin is important to him than his entire family, than his mother who gave him birth. Jasmin gets bored by the family drama. Gurpreet tells that nobody wanted to keep Jasmin in the house. She regrets that she supported Fateh and Jasmin’s relationship. She tells that Fateh has slapped her upbringing today. Khushbeer calms down Gurpreet. He is equally upset with Fateh. Fateh breaks into tears seeing his parents crying. Angad and Tejo come there and learn that the marriage is completed.

Angad congratulates Fateh and Jasmin. He asks Khushbeer and Gurpreet to bless Fateh and Jasmin as they had promised Tejo. Nimmo reprimands Jasmin for her drama. Jasmin tells that her bidaai is happening to Canada directly. Sandhus feel Jasmin is really disgusting to hurt Virks so much. Jasmin tells that she has to rush and finish the packing, she can’t miss the flight. She gets mad for the Canada trip. Satti calls her really shameless. Jasmin asks her friends to sit down and see if the kaleerein falls on them. She tells that the kaleerein didn’t fall over them, their fate isn’t so good like hers.

Fateh apologizes to his family. He tells that he had promised to fulfill Jasmin’s dreams, and also his family won’t be happy if Jasmin stays with them. He adds that he wants the family to live in peace. Gurpreet asks him how did he decide it all alone. She feels he has disrespected and lost all the relations for his wife’s dream. She rebukes him for making her regret her upbringing. She cuts off her ties with Fateh. She declares that Fateh is no longer her son. Keep reading.

Reviewed Rating for Udaariyaan 27th November 2021 Written Update Love test: 5/5 This rating is solely based on the opinion of the writer. You may post your own take on the show in the comment section below.