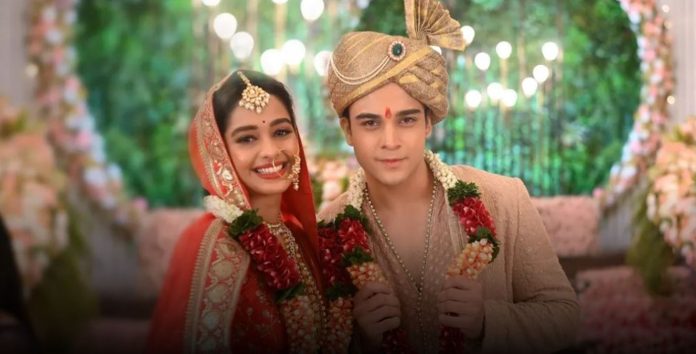 Kumkum Bhagya 29th November 2021 Written Update Wedding Prachi breaks her pregnancy news to Siddharth. She tells him that she got dizzy because she is pregnant. She adds that she didn’t take any of his words against Ranbir on her heart, the reason for her fainting is just her pregnancy, which got disclosed to her just now. Siddharth is shocked to know about her pregnancy. He knows that things between Prachi and Ranbir will never get fine now, and Prachi has to become a single parent if she wants to bring the baby into the world.

Siddharth worries for her, and so does Sushma. Sushma overhears their conversation and learns about Prachi’s pregnancy. Sushma doesn’t know how to handle Prachi’s pregnancy now, because her entire life will change from now. Sushma wishes Pragya gets back to consciousness and supports her daughter. Siddharth gets the news from Pallavi that Ranbir and Rhea are getting married. He is left shocked, but knew that they will marry some day, because it was their filthy plan to break their respective marriages for this reason.

On the other hand, Dida is upset to see the mehendi preparations at home. Rhea made the pandit lie about the marriage mahurat and got the marirage scheduled on the next day itself. Rhea happily celebrates her mehendi function. Dida knows that Rhea has ousted Prachi and Siddharth by her evil conspiracies just to marry Ranbir. She doesn’t want Rhea to succeed in her evil motives. She warns Rhea about the day when she will get exposed for her crimes. She tells that Rhea will get deeply hurt and fall in everyone’s sight when her truth comes out in front of Ranbir and Kohlis.

She tells that Rhea will need haldi along with mehendi to apply on her wounds. Rhea angrily replies to Dida that once the marriage happens, they shall see who gets hurt. She asks Dida to let the marriage happen. Rhea plans to marry Ranbir and then throw out his family from the house. Kohli really deserve a lesson for being so foolish and trusting manipulative Rhea. Rhea tells that its just one day for her marriage now and gets too excited. Will Ranbir get married to Rhea, or will Prachi arrive home to stop the marriage? Keep reading.

Prachi learns that she is pregnant. She recalls a cute moment from the past, when Ranbir celebrated her pregnancy in advance. Ranbir was happy to experience the joy of fatherhood in advance. Ranbir and Prachi were so happy together, until Rhea came in their lives. Ranbir wanted their baby to come in their lives. Prachi thinks of Ranbir, who always held her too important in her life. Ranbir had told her three dreams, marriage with Prachi, to have a daughter and then succeed in his startup.

Ranbir always wanted a good family. She thinks that Ranbir was always waiting for her pregnancy. He had promised her that he will never hurt her. She tells Ranbir that they are pregnant. She recalls his dirty accusations on her character. She regrets that their relation is over, when they were expecting a baby. She felt the time will change Ranbir, or she will end the relation with Ranbir by trying hard. She doesn’t think that she can end her ties with Ranbir and his memories now. She cries on the pregnancy news.

Ranbir feels uneasy. Pallavi meets him and asks him to marry Rhea on the next day itself, as per the mahurat given by the pandit. She tells that the next mahurat is after a month. Ranbir tells that tomorrow’s date will be too early. She tells that they are already running late. She asks for Siddharth’s number. He tells that he doesn’t have it. Vikram tells that he has the number, and asks why does she want it. He goes to know the matter. She wants to inform Siddharth about Ranbir and Rhea’s marriage.

Ranbir and Prachi miss each other. Vikram asks Pallavi not to call Siddharth. She doesn’t listen. She calls Siddharth. He gets reminded of Rhea’s words about the dirty conspiracy. Siddharth tells that he doesn’t know her. Vikram rebukes him for disrespecting them. Siddharth asks is he reminding him their relations after doing his last rites of their blood ties. He tells that he was too hurt before, but he knows the truth now, they wanted to get Rhea and Ranbir married. Pallavi tells that she called to inform him about Ranbir and Rhea’s marriage. She doesn’t invite him.

She asks him not to show his face in the marriage function. She warns him to stay away. She asks him is he shocked. She tells that Ranbir and Rhea also have a right to move on, like Prachi and he did. He tells that he doesn’t care for anyone. He disconnects the call. He thinks he needs to tell Prachi about Ranbir and Rhea’s marriage. Rhea is worried that Siddharth can create a problem for her marriage. She doesn’t care for him. She gets Shaina’s call. Shaina tells that she is with her in her sorrowful phase. Rhea laughs. She tells Shaina that she is getting married to her love, Ranbir.

She asks Shaina to meet her and then learn the entire thing. Siddharth finds Prachi crying. He asks her if she got to know the news. She thinks of her pregnancy. She tells that she doesn’t know how to react. She can’t say its good or bad. He tells that Rhea and Ranbir will get married, and then the chapter will end. She is shocked to hear this. He tells that Pallavi called him and informed him. She can’t believe it. She faints in his arms. He worriedly shouts for Sushma. Pallavi gets the designers home. She asks Ranbir to get his clothes ready.

Ranbir tells that its a simple wedding. Rhea wants him to get dressed well. Pallavi asks Rhea not to worry, she will talk to Ranbir. Prachi gains consciousness. Siddharth asks Prachi what happened to her that she fainted. She tells that she had fainted because of her pregnancy. Siddharth and Sushma congratulate her. Siddharth tells that he will inform Pallavi and Vikram that they are becoming grandparents. He thinks to inform Ranbir that he/Ranbir is going to become a father. He tells that Ranbir will not marry Rhea, on knowing this big news. Sushma stops Ranbir.

Rhea welcomes Shaina in her marriage function. Pallavi asks Shaina to become Rhea’s family. She asks Rhea to get mehendi until she finishes her work. She wants to throw Prachi’s things from Ranbir’s room. Rhea tells Shaina that she is marrying Ranbir. She adds that she didn’t wish to marry Siddharth, but she had to marry him just because Ranbir had married Prachi. Dida overhears this. She interrupts Rhea and asks her to complete the story.

Reviewed Rating for Kumkum Bhagya 29th November 2021 Written Update Wedding: 2/5 This rating is solely based on the opinion of the writer. You may post your own take on the show in the comment section below.