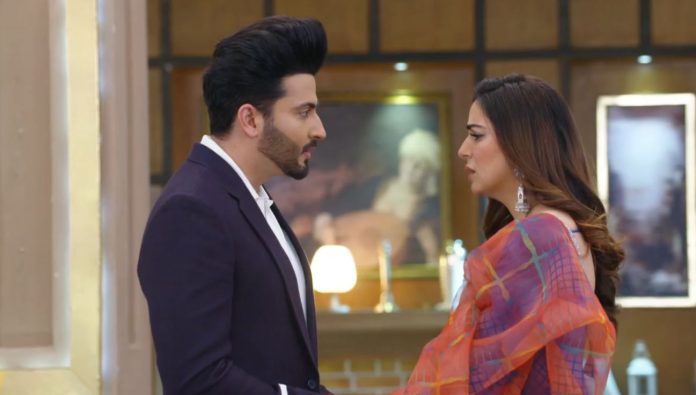 Kundali Bhagya 29th November 2021 Written Update Pihu kidnapped Karan gets a call from the kidnapper. Karan gets angry and yells at the random called. He asks about Pihu, when the kidnapper hints that Pihu is with the goons. The kidnapper asks him to see the pictures he had sent at the main door. He tells that there will be an envelope found at the main door. Karan shouts to ask about Pihu. Preeta runs to the main door and finds the envelope. She checks the pictures. She shouts Pihu, when she sees Pihu kidnapped.

Rakhi, Bani and Kareena cry in shock that their little Pihu is kidnapped. Even Sonakshi is shocked and scared that her name will get known to them if Roma tells them that Preeta had come to pick up Pihu. Sherlyn senses that Sonakshi has done something wrong that she is looking terrified. Sonakshi wishes Pihu gets saved from the dangerous kidnappers. She is using Pihu as a medium to enter Karan’s life. Luthras cry in shock. They ask Karan to do anything and give away whatever the kidnappers demand to bring Pihu home. Karan and Preeta worry for Pihu a lot. Will they be able to save Pihu? Keep reading.

Earlier in the show, Sonakshi returns home with tears in her eyes. She gets scared to tell them the truth. Preeta tells Karan that she has to go and pick Pihu from Roma’s house. She adds that she received Roma’s message as well. Sherlyn finds Sonakshi scared. Sonakshi thinks she made a big mistake, someone kidnapped Pihu and she can’t even tell them. The kidnappers gang is seen. They don’t want to get caught by the police. Simmi gets Pihu to the dangerous kidnappers. They don’t want anyone to trace them. They make a video of Pihu to send to the Luthras. Preeta doesn’t find Roma’s message in her phone. Sonakshi wants Karan to scold Preeta.

Preeta shows the message to Karan. He asks her to read it again, Roma had called Preeta home to pick Pihu. Preeta tells that she read some other message and didn’t get to see this. She adds that she will call Roma and ask her. Karan wants her to clear the confusion. Sonakshi tells him that Roma would have left Pihu outside the house. She shows her concern towards Pihu and also makes Kareena and Bani angry on Preeta. Preeta calls Roma to ask for Pihu. Sonakshi is tensed. She gets Preeta’s call on her phone.

Preeta cries a lot for Pihu. Karan tells the family about Pihu’s kidnapping. He asks Preeta to relax. He promises that he will get Pihu back. Kareena tells that Preeta is responsible for Pihu’s kidnapping. Bani asks why didn’t she go on time. Sonakshi also cries for Pihu. Rakhi tells that this would have not happened if Preeta went on time. Mahesh asks them to not blame Preeta. Preeta asks Karan not to involve the police and just get Pihu home. Karan tells that he will call his friend Vinod.

Sonakshi also blames Preeta. Karan shouts and asks Sonakshi to shut up. Kareena asks Karan to bring Pihu some way. Karan contacts Vinod and informs about Pihu’s kidnapping. He asks Vinod to come home. Vinod assures that he will bring Pihu home. Sameer arrives home. He learns about Pihu’s kidnapping. Karan consoles Preeta and hugs her. Sonakshi cries and runs to her room. Sherlyn goes to shoulder her.

He calls her home urgently. She rushes to meet him. Preeta asks Karan why didn’t Vinod come. Vinod and his team come to meet Karan and Preeta. Preeta tells Vinod about the kidnapping case. Vinod tells that he can easily solve this case. Vinod explains Karan the procedure for tracking the kidnapping. He asks Karan to get ready, the media can come anytime to question him. Stay tuned.

Reviewed Rating for Kundali Bhagya 29th November 2021 Written Update Pihu kidnapped: 3/5 This rating is solely based on the opinion of the writer. You may post your own take on the show in the comment section below.