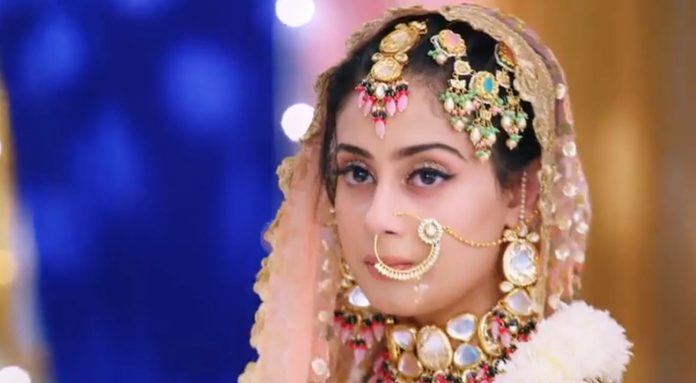 Udaariyaan 28th November 2021 Written Update Shocker for Jasmin Jasmin tells Fateh that their new life is starting, they are husband and wife now. She asks if they will go to Canada and start their new life. Fateh replies with a yes. He tells that their new life will start with his surprise coming. She is very happy to become Fateh’s wife and get the title of Mrs. Virk. Later, Fateh visits the Gurudwara. He gets to see Tejo there, washing the utensils and serving the Gurudwara. He gets touched by her goodness again. Tejo is in pain that he is going forever. She hides her sorrow from him. She also hides that even she is going away from the village forever. What shocker will Jasmin receive from Fateh? Comment your views and keep reading.

Earlier in the show, Fateh apologizes to his family. He tells that he had promised to fulfill Jasmin’s dreams, and also his family won’t be happy if Jasmin stays with them. He adds that he wants the family to live in peace. Gurpreet asks him how did he decide it all alone. She feels he has disrespected and lost all the relations for his wife’s dream. She rebukes him for making her regret her upbringing. She cuts off her ties with Fateh. She declares that Fateh is no longer her son.

Fateh bears the family’s wrath when it gets disclosed that he is leaving for Canada. He tells them that he can’t live without them, if they end their ties. He adds that they are his life. He begs them to forgive him once and not make him away. The family doesn’t listen to him, but Angad steps in to remind them their promise that they will bless Fateh and Jasmin in the marriage. Angad tells them that they shall forgive Fateh for the sake of Tejo, their daughter.

He reminds them that Fateh is their son, their blood, he needs them and won’t be able to live if they end their ties. He makes them emotional by their speech. He tells them that they shall forget whatever happened and accept Fateh. Fateh gets accepted back by the family, who can do anything for Tejo. They forgive Fateh just because of Tejo. Angad makes Fateh unite with his family. Even Khushbeer hugs Fateh and blesses him. Tejo is glad with Angad’s speech and efforts.

Tejo is much upset and leaves from the house along with Angad. Tejo is hurt because of Jasmin’s words. Jasmin stops Tejo to insult her. She tells that Tejo should get married to Angad, because he has many emotions for Tejo. Tejo doesn’t like to hear the nonsense from Jasmin. Jasmin taunts Tejo and asks her to check if her kaleerein falls over her. Tejo isn’t interested in the kaleerein rituals. Jasmin finds Angad taking a stand for Tejo when she insults the latter. She asks Angad about his real emotions seen in a fke engagement. She tells that she knows their truth well that they faked their engagement.

She adds that she has kept the truth a secret so that the family doesn’t unite back the sobbing Tejo with Fateh. She tells them that she will not tell the truth to anyone, because she doesn’t want any such troubles for Fateh and her, but advises them to get married and turn their relation true. Angad asks her not to bother and focus on her own life and happiness, which should be more important to her. She tells them that she is happy to go to Canada with Fateh. Tejo finds Jasmin slipping and saves her. She advises Jasmin to stay happy and take care of herself and Fateh.

She tells that Jasmin should keep Fateh happy and have a good life with him, because there will be no one from their family to support them or help them. She asks Jasmin to focus on their lives in Canada and stay happy. Tejo just wishes the good for Jasmin, but still gets to hear insults in return. Angad regrets to see Tejo tolerating so much. He asks Tejo to come with him. Jasmin goes to finish the packing, while Tejo leaves with Angad with a heavy heart. Tejo wants to visit the Gurudwara. Angad takes her there for her mental peace. Tejo still prays for Fateh’s happiness.

She also wishes that her sister stays happy. Fateh finds his family sinking in sorrow because of his decision. He finds Gurpreet crying a lot, but can’t help. He tells Simran that his leaving is very important for a purpose. He doesn’t reveal much, and goes away. The Sandhus cry for Tejo’s future. They curse Jasmin who has ruined Tejo’s life completely. They feel Jasmin will get cursed by Virks as well for snatching their son. Fateh meets Jasmin and taunts her for neglecting him once her Canada dream is fulfilled. Jasmin tells that she has no time for him, because she has to finish the packing for their long stay in Canada.

She asks him about the rest of the surprise, but he asks her to patiently wait for a day. Tejo and Angad make prayers at the Gurudwara, while Fateh also reaches there to make a prayer for Tejo. Fateh and Tejo stay connected by their hearts. Angad just wishes for Tejo’s happiness. He regrets to see tears in her eyes. What will happen next? Keep reading.

Reviewed Rating for Udaariyaan 28th November 2021 Written Update Shocker for Jasmin: 5/5 This rating is solely based on the opinion of the writer. You may post your own take on the show in the comment section below.