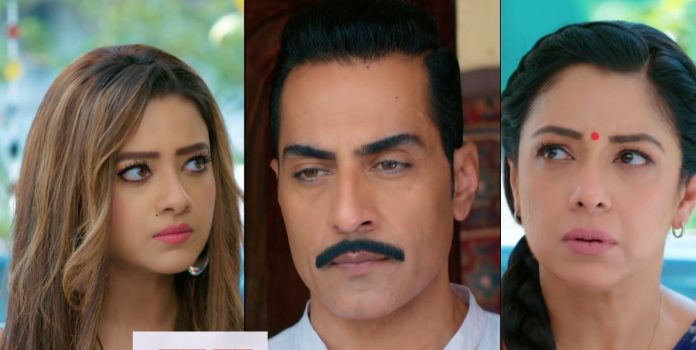 Anupama 29th November 2021 Written Update Kavya’s taunt Kavya asks Vanraj if he is finding something. Vanraj continuously searches for something. Kavya pulls out wireless earphones from Vanraj’s ears and asks him if he is ignoring him? This makes Vanraj angry and he asks Kavya to never do this with him. Kavya asks Vanraj why is he reacting like this? Vanraj asks Kavya to see her actions first to know the reason behind his reactions. Kavya says she already apologized and starts telling her expectations from Vanraj. Vanraj stops Kavya in between and asks her to not and never expect anything from him after whatever she did.

Anupama calls Anuj to inform him that she will not be able to come for office work as she has to spend some time with her family. Anuj hears kids and Baa-Bapuji’s smile and happiness from behind and understands what Anupama wants to ask. Anupama informs Anuj that the designs they were waiting for arrived. She asks Anuj if it would be okay if she works late at night and submit the work, next day in the office. Anuj asks Anupama to not worry and submit work as per her convenience. He tells Anupama that shahs are together happy because of her only. Anuj says he feels like asking her to not visit people like Vanraj and Kavya, but then see and feel that other shahs cannot live without her. He calls Anupama amazing.

Anuj’s words make Anupama surprised. Anuj asks Anupama if there are any tests of Baa to be done, then do tell him. Anupama requests Anuj to do his work with dedication and not get involved in her family problems. Anuj asks Anupama bif everything is alright. He feels relaxed when Anupama replies that everything is fine. Anuj tells Anupama that he thought some people in the shah family were toxic but now he understood that many people in the shah family are sweet too. Anupama makes Anuj laugh by saying that she didn’t understand the meaning of toxic. Anuj replies to Anupama that she will understand the meaning once she meets Kavya and Vanraj.

Anupama understands the meaning of toxic people and laughs. Anuj explains to Anupama that not everyone is a good person like her and doesn’t deserve her goodness. He also explains to her that it becomes important to answer back to some people. Anupama tells Anuj that she will take care of it. Anuj disconnects the call by asking Anupama to take care and they greet “Jai Shri Krishna” to each other. Anupama collides with Vanraj. In Baa and Bapuji’s absence, Anupama discusses Baa and Bapuji’s marriage anniversary. Anupama explains that many people get their parents remarried on their 50th marriage anniversary. Vanrah stops while saying that they (Anupama and Vanraj) too got remarried.

Everyone gets sad recalling what happened. Everyone gets excited for Baa and Bapuji’s remarriage. Paritosh indirectly taunts Kinjal by saying spending 50 years together is a big achievement as many people get distanced in a year of their marriage. Samar and Paritosh jokes to make everyone laugh. Anupama asks where they should keep the celebration. Vanraj replies that Baa and Bapuji’s anniversary will be celebrated in shah house only and AnupMa will come too. Kinjal and Pakhi ask Samar to search for the latest bridal and groom outfit. Anupama makes Vanraj and everyone laugh by reminding that Samar ruined Baa’s wedding saree by urinating on it in the past.

Kavya gets angry seeing everyone laughing with Anupama. She thinks what is keeping Anupama and Vanraj joined in some way together? Kavya recalls Shahs and Vanryj ignoring her. She thinks why shahs are ignoring her and enjoys being with Anupama. Everyone distributes their duties for Baa and Bapuji’s 50th wedding anniversary celebration. Samar says he and Nandini will handle all dance performances. Pakhi takes the responsibility for getting Baa and Bapuji ready for their anniversary. Samar says Kinjal and Paritosh will see decorations and catering works. Kinjal says she will handle catering and Paritosh will work on decorations. Paritosh thinks that Kinjal now wants to work separately from him.

Paritosh walks away. Kavya looks at him confused and leaves. Anupama thinks a cat entered the kitchen. Pakhi and Samar tell her it’s her imagination. Samar makes everyone laugh by saying that in the past Anupama beat Vanraj thinking him to be the cat, who entered the kitchen. Anupama asks everyone to concentrate on their distributed duties.They get quiet seeing Baa and Bapuji arriving. Anupama and everyone tell Baa and Bapuji that they want to get them remarried on their upcoming 50th wedding anniversary. Baa and Bapuji ask everyone what’s the need? Everyone explains Baa and Bapuji the importance of completing 50 years of marriage. Bapuji jokes that it’s a big achievement to have spent 50 years with Baa.

Everyone laughs at Bapuji’s joke. Bapuji reveals he is not angry anymore with Baa. He asks Baa to see their children’s love. Everyone decides to finally get Baa and Bapuji remarried. Kinjal and Paritosh argue over home and work issues. Paritosh blames Kinjal for him being jobless. Kinjal tells Paritosh that any of his taunts doesn’t surprise her after all the ill words he said to Anupama. Kavya overhears them and tries manipulating Paritosh. She continues manipulating Paritosh saying that why Kinjal wants to leave all the comforts and luxury to stay in Shah house.

Kavya tells Kinjal is stupid. She asks Paritosh to not ruin his life for Kinjal. She compares Paritosh with dogs. Paritosh asks Kavya to use respectable examples. Kavya replies to Paritosh that he has no respect left. Kavya explains to Paritosh that she sacrificed all her self respect for love. She asks Paritosh to not repeat her mistake. Kavya manipulates Paritosh to move on from Kinjal like she moved on from Anirudh and Vanraj from Anupama. She smirks thinking that she successfully manipulated Paritosh. Baa and Bapuji recall their early days of marriage. They feel proud that their children remember their marriage date.

Bapuji jokes and makes Baa shy. Anupama comes there and jokes with Baa. Anupama asks Baa and Bapuji to give her their wedding outfits. She says she will make it a comfortable fit for them. Baa and Bapuji ask Anupama to ask Samar to drop her. Anupama agrees and leaves. She wards off the bad sight from happy Baa and Bapuji. Seeing Baa’s bridal chunri, Anupama recalls her 25th anniversary celebration and gets sad. She leaves hearing Kavya and Vanraj arguing. Kavya says to Vanraj that he should have informed her about Baa and Bapuji’s 50 th marriage anniversary celebration once. She gets angry and tells Vanraj that nobody talks to her properly and discusses everything with Anupama.

She says everything that goes on in Shah should be discussed with her too. Vanraj asks Kavya what she will do if anything is not discussed with her. Kavya says she hasn’t thought about what she would do. Vanraj asks Kavya should he celebrate Baa and Bapuji’s anniversary somewhere else or in Anupama’s house. He scares Kavya and asks her if he should take away his family from Shah with himself.

In the next episode, Anupama will be seen working on sil batta in Shah house. She will ask Kavya to try behaving normally. Kavya will show attitude to Anupama and will ask if she is giving a lecture to her in her own house. Anupama will ask Kavya why she is blurting again and again saying, “my house, my house”. She will ask Kavya to try getting her name written on people’s hearts instead of property papers. Kavya will ask Anupama if she too became a poet like her boyfriend. Vanraj will look at Anupama and Kavya’s war of words.

Reviewed Rating for Anupama 29th November 2021 Written Update Kavya’s taunt: 2/5 This rating is solely based on the opinion of the writer. You may post your own take on the show in the comment section below.