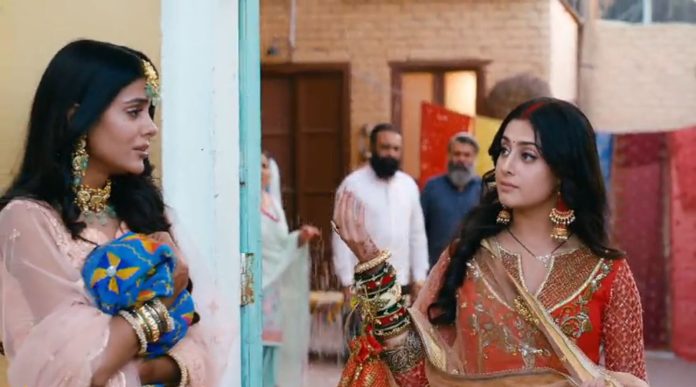 Udaariyaan 29th November 2021 Written Update Game changer Tejo is still in disbelief that Fateh is leaving the family and his village behind to go to Canada forever. Fateh goes to the Gurudwara to make a wish that Tejo always stays happy. Tejo has equal concern for him. She also wishes that he stays happy with Jasmin. She thinks like Jasmin always dreamt of Canada, Fateh always dreamt of marrying Jasmin. Seeing both of their dreams coming true, she wishes that they both have an amazing future in Canada.

Tejo relieves her stressed heartache by serving the people at the Gurudwara. Fateh is also in pain that he has hurt Tejo and his family so much. He also does the same social work like Tejo. Later, Tejo returns home and finds Jasmin with Sandhus. She doesn’t appear in front of Jasmin while seeing the latter perform the farewell rituals herself, without involving the family. Jasmin gets shameless to argue with Sandhus and break their hearts before leaving the village. She tells that she is going to Canada and will never turn back to see them.

The family curses her, while its just Tejo who blesses her with a big heart. Tejo weeps silently, and yet gets seen by Jasmin, who cares a damn about her. Tejo had warned Jasmin to mend her ways, else the assumed victory may turn into a big defeat. The same will really happen with Jasmin when Fateh reveals the next shocking surprise for her. The game will completely change and also Jasmin’s fate. Who will be at loss and who will be at the winning side? Keep reading.

Fateh finds Tejo working to assist the Gurudwara people. Angad also joins her. Fateh gets emotional seeing Tejo. He feels more guilty. Angad didn’t expect Fateh to come there. Jasmin meets the Sandhus and hurts their heart even more by her shameless and insensitive attitude. She tells that her wishes and dreams are getting true one by one, she is going to Canada and came home just for her Bidaai rituals. She doesn’t listen to anyone when they ask her to leave. Jasmin tells Bebe that she has come for a special ritual. Fateh offrs help to Tejo. She doesn’t accept his help. She congratulates him. He hands over the chunri he had got for her much time before. She reminisces their past and grows emotional.

Jasmin irritates the family and tells that she is going to Canada, while they expected Tejo to go there with Fateh. She tells hat Tejo will be left behind with the family. She gets the things she had kept for her Canada trip. She wears the jacket and glasses, and dances madly. The family feels ashamed of her. Jasmin behaves too shameless. Fateh wishes Tejo to stay happy and forget the sorrow he has given to her. He wants her to forget him. He wishes she looks at him once. He feels hurt when she ignores him. He apologizes to her. Tejo asks him to look after Jasmin and himself. They have a painful moment of separation.

Fateh and Tejo cry in pain. He is going away from her forever. She breaks down with this thought and cries a lot. Fateh watches her crying. He feels sorrowful and goes away from her. Angad shoulders Tejo in sorrow and takes her with him to drop her home. Jasmin is still troubling the family. Jasmin shows her rights on the family and their things. She packs many things for herself without taking their permission. She finds them displeased and still acts kiddish. The family s upset with her behavior. Rupy breaks his silence when he finds her arguing with the family. Jasmin argues with him as well.

Rupy begs Jasmin to leave and never come back to their family. He tells that he is really fed up of her. Jasmin agrees to leave them and go away. She tells that she will complete the rituals before she goes. Jasmin doesn’t care for the family’s tears. Tejo reaches home and finds Jasmin with the family. She doesn’t come in front of Jasmin and hides behind the gate to see her. Tejo sheds tears for her sister’s leaving, while Jasmin doesn’t leave any stone unturned in an attempt to insult Tejo. Sandhus cry for Tejo.

Jasmin tells that she is doing everything to fulfill their dreams. She lectures them for always chanting Tejo’s name. She tells that Tejo could have fulfilled their dreams, but didn’t do anything for them. She hurts them more verbally, and makes Rupy lose his cool. Rupy raises a hand on her, but Jasmin stops him. She shows him his place. She asks him not to dare slap her. Jasmin calls everyone wrong on their stand, that they had brainwashed her for the Canada dreams always. She tells that they had made her mad for Canada. Rupy, Satti and Bebe rebuke Jasmin for her arguments and blames. Jasmin angers them by doing her bidaai in a proper way as she wants. Jasmin throws the rice as per the bidaai ritual and leaves, watching Tejo at the gate. Tejo holds the rice in her hands, and cries for her sister. Stay tuned.

Reviewed Rating for Udaariyaan 29th November 2021 Written Update Game changer: 5/5 This rating is solely based on the opinion of the writer. You may post your own take on the show in the comment section below.