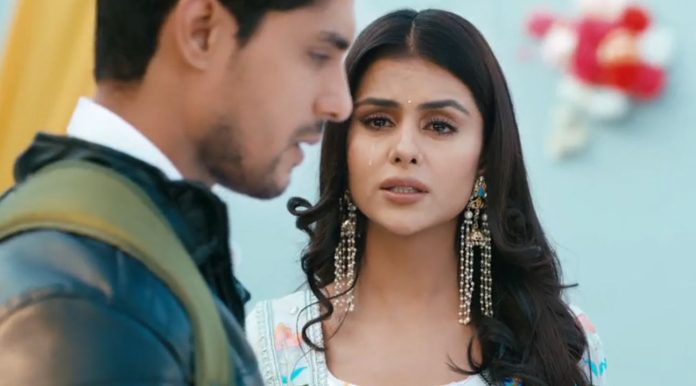 Udaariyaan 1st December 2021 Written Update Track Finale Fateh is sorrowful to see his family crying, while Jasmin behaves too selfish to just focus on herself. She is very excited for the Canada trip. She asks Fateh not to make it late. Fateh and Jasmin reach the airport where Jasmin behaves crazy totally. Fateh tries to control her excitement. She tells that she can’t believe it, her dream is actually turning true. On the other hand, Tejo wishes Fateh and Jasmin to always stay happy. Tejo makes a big revelation to Rupy. She tells him that she had faked the engagement with Angad for a reason. She tells that she just wanted both the families to bless Fateh and Jasmin.

Rupy knew that Tejo will do something like this for the sake of the family. He wants her to stop thinking of family, Fateh and Jasmin, and just focus on herself. Rupy is shocked to know that Tejo and Angad did a drama and faked their engagement. He was expecting Tejo to move on with Angad Maan. He feels sorry for his daughter. Tejo tells that she didn’t wish Fateh and Jasmin’s marriage to happen without the elder’s blessings and presence, so she had taken the help of Angad to plot the fake engagement drama and convince the elders to attend the marriage. Rupy feels guilty on knowing another of Tejo’s big sacrifice. He praises his daughter’s big heart, but realizes her pain as well.

What will be Fateh’s shocker for Jasmin? Just hearing about his surprise coming up. Will Fateh’s revelation be more dramatic and bigger than Tejo’s revelation? With the same upcoming bytes shown, the suspense buildup got higher. Fateh stops Jasmin just before boarding the flight. He makes her watch the flight leaving. Jasmin is shocked to see Fateh tearing her passport. She asks him what is he doing and why.

The shocker comes for Jasmin, when Fateh reveals his second surprise, that’s to stop Jasmin and break her dreams in the final moment. Fateh confronts her for getting Jass back in Tejo’s life, which he came to know when she got Jass bailed out. Fateh confronts Jasmin for all the crimes she did to humiliate and shatter Tejo. Fateh counts her sins and wants to punish her for it. Jasmin’s evil will get exposed. What will Jasmin do now? How will this love test track come to an end? Will it be the end of JasFa and a new beginning for FateJo? How do you like to see Tejo’s pairing, with Fateh or Angad? Keep reading.

Tejo misses Fateh a lot, while Jasmin is excited to go to Canada. She makes her plans for Canada stay. Fateh misses his family. He feels bad that he will be leaving his village. Fateh and Jasmin reach the airport and get another surprise. Jasmin sees her friends and goes to tell them that she is boarding the flight for Canada. She tells that she will call them to Canada soon. Fateh looks at Jasmin while she dances and celebrates with her friends. Her friends wish her all the best.

Rupy asks Tejo to cry and lighten the burden off her heart. Tejo tells that she is tired and fed up of all the recent happenings. She expresses her wish to go away from everyone. She doesn’t want to live a suffocating life. Rupy asks her not to get depressed, because she is already going to make a new start with Angad. He tells that he is pretty sure that Angad loves her and will keep her happy, even if she doesn’t love Angad now, she will start loving him after knowing him well. He tells that Angad is her fiance now and they both look good together. Tejo gets helpless to stop him from thinking anything further. He asks her to take time and decide about her marriage with Angad, then go anywhere she wants, but with Angad.

Tejo tells him that she faked the engagement with Angad for a purpose to get the family blessings for Fateh and Jasmin. She explains how she took Angad onboard for her plan. She tells that Angad just helped her in her plan, he doesn’t love her. Rupy is really shocked to know this. He didn’t know Tejo will go to this extent for the sake of Fateh and Jasmin. He feels sorry that she has ruined her future herself for others’ sake. She wants Rupy to understand her like he always does. Jasmin enjoys her final time in the village. Fateh asks Jasmin to rush, they are getting late for the flight.

Tejo takes Rupy’s permission. She wants to go away from the village and start a new life. She tells that she doesn’t know where she will go, but she wants to go afar. Angad meets Tejo and Rupy. Rupy is worried and apologizes to her. He feels guilty for her life’s miseries. She asks him not to let anyone know about the fake engagement. She makes him swear. She tells that she will tell Khushbeer the truth when she returns. She asks him to make an excuse to Khushbeer if the latter asks for her.

Tejo takes Rupy’s blessings and leaves with Angad. Angad promises to take her far from her burdened life. Tejo stays sorrowful. Rupy wishes that she gains her lost happiness back. Rupy feels Jasmin has hurt Tejo a lot. He curses Jasmin that she pays for her sins. He wants justice for Tejo. Fateh and Jasmin hear the announcement for the Canada flight. Jasmin can’t wait to board the flight.

Fateh stops Jasmin from entering the plane in the last moment. She asks him what happened now. He asks her to give her passport for some leftover formalities. He tells that he will just come in two minutes. He asks her to quickly handover the passport. Jasmin doesn’t understand and gives her passport. Fateh gets down the flight. He goes away and makes Jasmin watch his actions. He burns her passport, leaving her shocked. Jasmin shouts to stop Fateh. She runs to Fateh to save her passport.

She fails to save the burnt passport turned to ashes. Fateh smirks while she cries seeing her broken dreams burnt down by him. She questions him to know the motive behind his revengeful hatred. Fateh stays silent and makes her go mad in rage. Fateh gets caught by the airport officials for fire ignition near the aircraft. Jasmin seeks her answers from him, and learns about their fake marriage. Keep reading.

Reviewed Rating for Udaariyaan 1st December 2021 Written Update Track Finale: 5/5 This rating is solely based on the opinion of the writer. You may post your own take on the show in the comment section below.