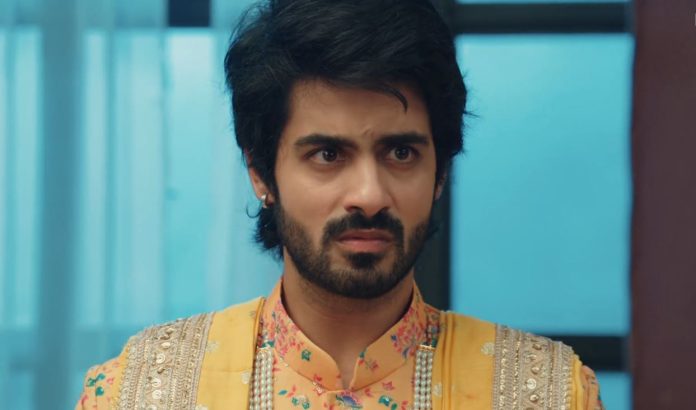 Mishka falls down and begs mercy from him. She asks forgiveness from him for her past misdeeds. Mishka tells him that she is ashamed of what she did to him in the past. Venky asks Mishka to repent for her mistake. He tells her that he will break all her dreams like she broke his dreams . Mishka continuously apologizes to Venky. Venky doesn’t accept Mishka’s apology and tells her that she will have to bear the punishment for her misdeeds. Venky pulls Mishka’s dupatta from her and she falls on the bed. Venky jumps on fallen Mishka and doesn’t let her escape. He closes her mouth with his hands.

Rudra and other family members bring Saaransh back home. Rudra worries about Mishka and starts going to see her. Prisha asks Rudra to get ready for the marriage functions. She sees Venky coming downstairs. Prisha asks him why he changed her gifted outfit? Venky tells Prisha that her gifted Kurta is a little tight and is pricking him. He pretends to be innocent and says that he will wear it if she wants. Prisha asks Venky to not wear her gifted kurta if it is troubling him. She tells Venky that he is looking handsome in his new outfit. Rudra thinks if Venky is with everyone then Mishka would be fine in her room. He thinks to change first. Venky smirks.

Param arrives with the baraat. Prisha and her family welcome Param. Prisha do’s Param’s aarti. Everyone dances and then Param sits on the mandap. Pandit ji asks to bring the bride downstairs. Prisha goes to call Mishka. Venky smirks. She knocks on Mishka’s bedroom door. She again and again taps Mishka’s room door and window. She gets tensed for Mishka. Prisha goes to Rudra and tells him that Mishka is not opening the door. Rudra gets tensed and thinks he should have not left Mishka alone. He wonders if Venky did anything to her. Rudra thinks about what would have happened if Venky was with everyone downstairs.

Param finds Rudra and Prisha tense. He goes to Rudra and Prisha and asks them what happened? Param also asks about Mishka’s whereabouts. Prisha tells Param that Mishka is not opening the door. Param says he will come to see what happened? Vasudha and others too worry thinking what would have happened? Vasudha and GPS leave to see Mishka leaving the kids with Sharda. Venky thinks that now drama will happen and Mishka will realize how he felt 10 years ago when she put false allegations on him. He thinks not to miss it and leaves for Mishka’s room.

Rudra and Param decided to break the door after getting no response from Mishka. They break the door and enter Mishka’s room. Everyone gets shocked to see Mishka and her room’s condition. They wake up an unconscious Mishka. Mishka wakes up shocked and scared. She shouts scared. Mishka hugs Prisha and cries a lot. Prisha asks Mishka what happened? Mishka replies that she got raped. Everyone gets shocked to hear it. Param asks Mishka what she is saying? Rudra asks Mishka why she opened the room door for anyone else, when he already warned her not to. Mishka says she opened because he (Venky) took his name.

Mishka says she thought he sent him (Venky). She cries and tells Rudra that he was right to warn her. She cries uncontrollably telling that he (Venky) raped her. Rudra asks Mishka if he (Venky) did this with her? Rudra asks to call the doctor. Prisha asks Mishka who did this to her? Venky comes there. Mishka points her finger towards Venky. Prisha asks Mishka what rubbish she is saying about her brother. Vasudha agrees to Prisha. Mishka accuses Venky of raping her. She tells Prisha that Rudra warned her that Venky will get his revenge and ruin her life. She accuses Venky of snatching respect for real this time. Prisha asks Mishka, what does she mean by snatching her respect for real this time?

Rudra says it means this happened earlier too. He reveals to everyone that it was Mishka who falsely accused Venky of molesting her 10 years ago. This revelation shocks everyone. Saaransh and Sharda put a lot of questions in front of Sharda that why is Param and Mishka’s marriage not taking place? Vidhi gets emotional and asks Sharda how will Mishka become her paternal aunt and mother if her (Mishka) and Param’s marriage doesn’t occur. She cries saying that she will have to remain alone all her life. Saaransh asks Vidhi not to cry as Prisha and Rudra will correct everything.

Sharda asks kids not to worry as everything will get alright. She prays to god that everything goes alright. Prisha tells Mishka that Venky and her family suffered so much because of her. Prisha and GPS ask Rudra why he didn’t tell them if he knew that Mishka was the girl who falsely accused Venky of molestation 10 years ago. Rudra reveals that Mishka herself told all this and was ashamed of her misdeeds. Vasudha says that Mishka wasted 10 years of her son’s life. She shouts at Mishka and tells her that her one lie ruined so many lives.

Vasudha continues accusing Mishka of ruining her family’s life and happiness. She gets angry at Rudra for hiding everything. Vasudha asks Mishka to shut and asks her if she is asking for forgiveness by putting another allegation. She also vents out her anger on Rudra for helping Mishka. GPS tells Mishka to see Venky is still not well and asks how he can force himself on her. Rudra says Venky has got alright and is just pretending to be unwell. He asks Prisha to know the real truth from Dr. Radha. Rudra also says that a test can prove Venky’s lies. Venky, GPS and Prisha refuse to believe Rudra. Prisha gets angry at Rudra and accuses him of lying to trap her brother.

Rudra asks Prisha why he will lie? He tells Prisha that he wants to save her from Venky’s deception. Rudra continues saying that Venky came to Khurana house to get his revenge from Mishka. He accsues Venky of raping and getting revenge from Mishka. Rudra asks everyone to ask the truth from Venky. Prisha asks Rudra to shut down. She asks Venky if Msihka was the girl who falsely accused him of molestation in the past. Venky replies yes it was Mishka who falsely accused him of molesting her 10 years ago. Prisha asks Venky why he didn’t tell anyone about it. Venky acts innocent and says he didn’t want to create any trouble and thus hid the old truth.

Reviewed Rating for Yeh Hai Chahatein 30th November 2021 Written Update Shocking: 3/5 This rating is solely based on the opinion of the writer. You may post your own take on the show in the comment section below.