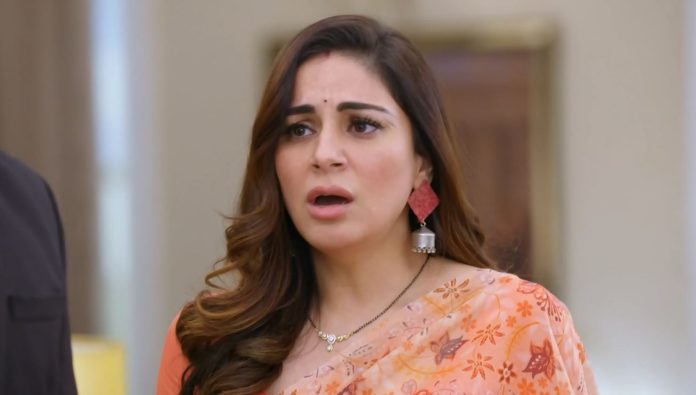 Sonakshi isn’t at home, but Sherlyn is at home. Sherlyn learns the entire plan of Vinod for nabbing the kidnappers. Vinod tells Karan that his team will track the kidnappers and then enter the den to rescue Preeta. Preeta tells that she will also go with Karan and rescue Pihu. Karan refuses to take her along and increase the danger. He tells that she will stay at home, she will not go anywhere. He doesn’t want any risk for Pihu and Preeta. Preeta sheds tears. She wants Pihu back at any cost. Keep reading.

Earlier in the show, Shrishti comes home. Sameer tells her the entire matter of Pihu’s kidnapping. She is shocked. Mahesh tells that Preeta needs her, she is blaming herself after Sherlyn accused her. He asks Shrishti to explain Preeta that Karan, Rakhi and he trust Preeta a lot. Shrishti thanks him for understanding Preeta so much. He tells that Preeta is his daughter first, he understands her well. Karan and Preeta come home from the bank. Preeta hugs Shrishti and cries. Shrishti asks Preeta to calm down and not blame herself.

Sonakshi asks the goons to handle Pihu. She doesn’t care if Pihu refuses to have the food. She tells that Pihu is her daughter, she can take care of her. Simmi asks her to feed something to Pihu, else she will faint down. Sonakshi asks Simmi to blindfold Pihu. She tells that she will feed Pihu. Karan and Preeta get the cctv footage. They get to see a lady who has kidnapped Pihu. Sherlyn rushes to see if Sonakshi is seen in the footage. They don’t see the lady’s face in the footage. Vinod tells Karan that he will find about the vehicle seen. Preeta wonders who has kidnapped Pihu.

Pihu tells that she isn’t scared now because Sonakshi is with her. Sonakshi goes away. Pihu senses that Simmi isn’t Sonakshi. Simmi feels sorry for Pihu. Pihu asks Simmi about Sonakshi. Sherlyn calls Sonakshi. She asks what was she doing. Sonakshi tells that she was feeding Pihu. Sherlyn tells that Karan has arranged money, but Vinod had put a tracker in the money bag to catch her. Sonakshi wants them to pay a big price for their oversmartness. She tells that they involved Vinod and went against her word. She wants Karan and Preeta to pay the price for the cheat.

Mahesh tells that the kidnappers are heartless. Preeta is afraid for Pihu. Vinod asks her not to worry, Pihu is safe. Sonakshi calls them again. She asks Preeta to talk to Pihu. The family tells Pihu that they will free her soon and bring her home. Pihu tells that she is very scared. She asks them to save her. Preeta tells that Karan will come soon and save her. She asks Pihu to be strong. The family encourages Pihu to stay strong. Preeta begs Sonakshi not to harm Pihu. Sonakshi tells that Pihu got kidnapped because of Preeta’s negligence. She adds that Preeta isn’t suitable to become a good mother.

Sherlyn wants to know Sonakshi’s plan. Vinod tells that the kidnapper is ahead of them, he may know about the tracker as well. He thinks to change his plan. He tells that they will fix an audio device to execute their plan. He adds that he will send police to help Karan. Karan doesn’t want the police to reach there. He is afraid for Pihu. Preeta tells that they can’t put Pihu in risk. She wants to go and bring Pihu back. Karan refuses to take her along. Preeta argues with him. He tells that he will go alone. Kareena blames Preeta for her negligence.

Karan stops her from accusing Preeta again. He asks Shrishti to look after Preeta until he returns with Pihu. Sameer wonders where did Sonakshi go. Sherlyn wants to alert Sonakshi. She stops Sameer to lie to him about Sonakshi. Shrishti consoles Preeta. Preeta blames herself for putting Pihu in this big danger. Shrishti tells that its not her mistake. She tells that Bani and Kareena are angry. Preeta asks her to keep her updated. She doesn’t want Karan to go alone. She finds a way to go along with Karan.

Reviewed Rating for Kundali Bhagya 1st December 2021 Written Update Rescue twist: 2/5 This rating is solely based on the opinion of the writer. You may post your own take on the show in the comment section below.