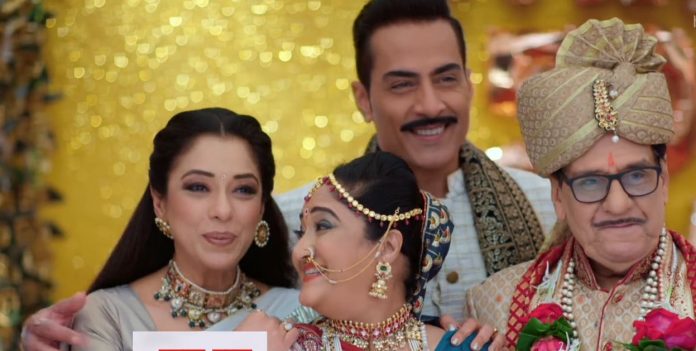 Anupama 2nd December 2021 Written Update Kavya blasts Boys team starts singing the qawwali song “Tum se mil ke”. Vanraj shows Baa her name written on Bapuji’s hand. Baa feels shy. The Girls and Boys team starts dancing together. Bapuji makes a shy Baa dance with him. Kavya gets alone between everyone. Vanraj receives a call and he goes aside to pick it up. He asks the person on the other side of the call to deliver the package the next day to him only. Anupama from far away looks at Vanraj and wonders what is he up to?

Kavya asks Vanraj to dance and says that they will also plan something wonderful for their wedding anniversary. Vanraj smirks and leaves Kavya alone. Kavya thinks why Vanraj reacted like this? On Anupama’s insistence, Kinjal will ask Kavya to come and dance with everyone. Anuj imagines himself romantically dancing with Anupama. His imagination gets interupted. Next Anuj receives a call from someone. He gets shocked and thinks about why this person called him after such a long time. Anuj shows GK the name of the person who called him. He decides to not spoil Anupama’s important day.

Baa gets shy when Bapuji tries to make her eat by his hands in front of everyone. Kinjal tells Bapuji that Baa is getting shy around others, not him. Everyone laughs. Mamaji asks Bapuji to make him eat too. Bapuji does the same and Mamaji jokes, making everyone laugh. Anupama serves the kheer. Only one bowl of kheer gets left when she reaches to serve Anuj and Vanraj. Everyone wonders who will pick up the last kheer bowl left in the tray in Anupama’s hand. Vanraj picks it up. He offers it to Anuj. Kavya wonders what bromance is going on between Vanraj and Anuj.

Vanraj offers the bowl to Anuj and tells him that he should have it first as he has come to his house. He further says Kinjal will bring more for him. Anuj takes the kheer bowl and thanks Vanraj. Anupama feels surprised and happy. Kinjal asks Anupama to sit and goes to bring kheer for both Anupama and Vanraj. Kavya in her mind asks Vanraj to feed Anuj by making him sit on his lap. She calls Shahs “a bloody palti maar family”. Anuj starts praising the kheer but stops in between. Vanraj says anyone who eats something made by Anupama blurts “waah” only. Kavya feels angry and jealous. Kinjal serves kheer to Anupama and Vanraj. Vanraj thanks Kinjal.

He asks Anuj how is work going on? Anuj says work is going well. He reveals that the project on which Anupama is initially working is his dream project. Kavya in her mind asks Anuj and Anupama to work on their project instead of seeing drama that occurs in their (Shah house) house. She also thinks about how Anuj and Anupama’s business works. Vanraj says to Anuj and Anupama that he will visit their restaurant after it opens. Kavya feels irritated and thinks that she is feeling dizzy. Vanraj tells Anuj that nothing will happen like whatever happened on bhoomi poojan. Anuj smiles and tells Vanraj that he is most welcome. He also tells Vanraj that his arrival will make him and Anupama feel good.

Kavya again thinks what is happening? She continues thinking how Vanraj changed so much, got away from her and became closer to Anupama. Samar asks who will have cold coffee? Many people say yes for coffee. Samar says it will take two shifts to make coffee for these many people. Samar stands up to go to the kitchen and make coffee. Baa stops him and asks Nandini why will Samar make coffee if she is present? Anupama asks Baa what is the problem if Samar makes coffee. She starts explaining to Baa that the problem starts from here only. Anupama explains that nowhere it is written that women will do household work and men will do outside work. She asks Samar to go and make coffee.

Samar says he as usual is supporting her words. Gk’s tongue slips and he says Anuj is there to support Anupama and her words. Samar goes to make coffee. Nandini asks some tips from Baa and Bapuji to make a husband wife’s relationship work for as long as theirs. GK says their generation relationships work for long. Samar comes there and informs that the mixer is not working.

Kavya says they should buy a new mixer. Bapuji says this is the example, as their generation tried to repair the products and worked on relationships instead of thinking of a new one. Kinjal says to Bapuji another reason for long term relationships in the earlier times was that, in earlier times women were not independent due to which they had to live however their husbands kept them. Women were not having any option to walk out of marriage and survive due to their dependence on men of the family.

Baa says her generation women were taught this only. Anupama says it took time for women to realize that husbands are human not god. Paritosh then why women are glorified as lakshmi, saraswati and durga etc. He says both husband and wife are humans and can walk out of marriage if it doesn’t work. Paritosh’s words shocks everyone, especially Anupama. Samar says, two people will definitely get separated if before marriage only they start thinking about issues in marriage. He also says that they saw different marriages in their family. A marriage which is working even on its 50th anniversary, a marriage which broke after its 25th anniversary, a love marriage (Paritosh and Kinjal’s marriage) and a newer generation arranged marriage (Dolly and Sanjay’s marriage) which is very cool.

Kinjal compares marriage with a buffet dinner. She says a marriage has love, support, togetherness, fights and arguments. Kinjal says it depends on a person what he or she chooses; love exists even after an argument or arguments exist even after being in love. Paritosh looks at Kinjal and Vanraj looks at Kavya. Anuj says relationships need to be built everyday bit by bit. He explains that a relationship is a journey towards a destination and everyone in it should walk together in it. Anuj continues explaining that many people take their partners for granted. He explains that couples before marriage try hard to find time for each other but after marriage even after having time doesn’t talk to each other properly.

Anuj further explains that a type of silence comes between couples after marriage. He requests couples to make their partners realize that they are lucky to have each other. Anuj again says that it is a person’s responsibility to give their love partner a reason to smile if their smile makes their day. Anupama feels shy. Anuj says people should keep their relationships new as they do keep their jewellery new and don’t let it get ruined. Kavya makes fun of Anuj’s words but gets shut with Vanraj’s angry stare. Paritosh says to Anuj that his words cannot be applied in practical life. He says that a person should make a marriage decision by thinking about it a thousand times.

Vanraj says a person should think about marrying a second time after thinking even more than 1000 times. He says, because the second time the man is not even worth breaking the relationship. Paritosh and Vanraj’s words shocks everyone. Pakhi says she doesn’t wish to get married after seeing marriages in her family. She explains that Vanraj and Anupama’s arranged marriage didn’t work. Pakhi further says that even Kavya and Vanraj’s and Kinjal and Paritosh’s love marriage is not working well as they always fight or argue. Pakhi asks Kinjal why she and Paritosh always fight even after Kinjal does so much for Paritosh. She further asks why Vanraj and Anupama’s marriage broke even after Anupama loves Vanraj so much. Pakhi continues asking why Vanraj is unhappy even after he married Kavya whom he loved.

Kavya gets angry and tells Pakhi that she and Vanraj are very happy in their marriage. Pakhi says she can’t see that. She further says that she doesn’t want marriage stress in her life. Paritosh advises Samar to get married after thinking a lot. Vanraj says to Paritosh that a stupid person always learns from his/her own mistakes but a sensible person learns from others mistakes. He tells Paritosh that they were stupid and asks him to be sensible. Vanraj further says marriage is not wrong but marrying a wrong person is a mistake. This shocks Kavya and Anupama. He asks them to take a lesson from Baa and Bapuji’s marriage. Kavya asks Bapuji to answer honestly if he would ever be able to forget whatever rubbish Baa said to him on diwali.

Bapuji replies that he doesn’t know but will try to forget whatever happened. He says that he will not let one day’s mistake become bigger than 50 years of love. Bapuji says that he may have also made mistakes in the past. He says that if a person who made a mistake regrets his/her mistake genuinely then his/her mistake shouldn’t be considered a crime. Anupama says if the life partner doesn’t accept his/her mistake then a person should move on in life leaving that relation behind. She also says that before leaving the relationship behind, a person should give it as many trials as he/she can, like Bapuji gave.

GK says he tried to get Anuj married too in the US but he had only one person in mind. GK stops speaking and realizes that his tongue slipped again. Mamaji and Bapuji change the topic. Baa and Bapuji try to explain to everyone to have trust in relationships. In the next episode, Bapuji will be seen dancing on “Tere Ghar aaya tujhko lene”. Baa will feel shy. Samar will call everyone for a group picture. Kavya will get angry seeing Vanraj keeping his hand on Anupama’s shoulder. She will take Anupama away forcefully. Vanraj will ask Kavya what is this insolence? Kavya will reply that Anupama was insolent with her during Paritosh’s marriage. She will tell Anupama that during Paritosh’s marriage she (Kavya) was an outsider and Anupama was Vanraj’s wife. She will further say that at present Anupama is an outsider and she (Kavya) is Vanraj’s wife.

Reviewed Rating for Anupama 2nd December 2021 Written Update Kavya blasts: 5/5 This rating is solely based on the opinion of the writer. You may post your own take on the show in the comment section below.