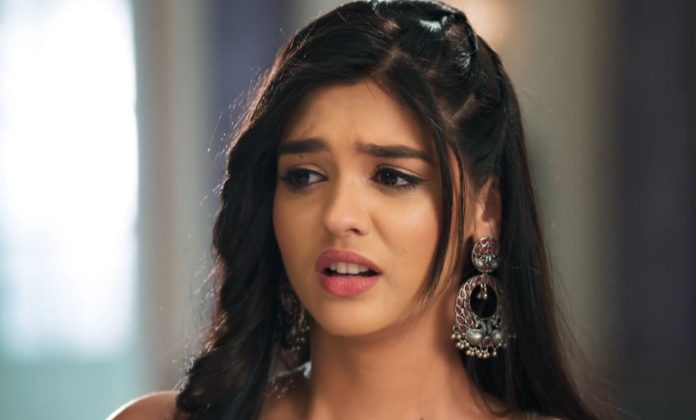 Yeh Rishta 2nd December 2021 Written Update Akshara’s decision Akshara returns to Goenka house and calls her family to come out. A servant arrives and informs Askhara that Kairav and Vansh went out, Suhasini went to an ashram and other family members went to a pooja in the neighbourhood. Servant leaves. Akshara wishes to explain everything to everyone especially Kairav before Aarohi tells anything to anyone. She thinks Aarohi will not let anybody understand the thing and will also not understand herself. Abhimanyu will stare at Akshara’s jewellery and recall past moments with her. He will throw it away.

Abhimanyu will leave the room and return to find Akshara’s jewellery that he threw away a few seconds ago. He will find it and keep it on his table, near his name plate. Abhimanyu then reaches the Juniors/interns orientation room. He asks them if they know the difference between a good and a great doctor. He recalls Aarohi’s outburst on Akshara and tells his juniors that a great doctor always keeps control on their emotions. Abhimanyu asks everyone if he is correct? Everyone except Aarohi replies yes, Abhimayu asks the same question again and Aarohi replies yes sir. Abhimanyu stares at Aarohi and leaves from there asking everyone to remember his words always.

Parth asks Manjari to take her migraine medicines. Manjari says let Abhimanyu return and talk to her. Abhimanyu reaches his home. Manjari explains to Abhimanyu to not think wrong about Akshara as she just helped them because she wanted to see him happy. Abhimanyu says that his wounds got fresh by all this. Harshvardhan returns and shows anger on Manjari. Abhimanyu asks Harshvardhan to not say anything to his mother as she did everything for his happiness. Harshvardhan asks Abhimanyu if he saw the latest news.

Shefali comes downstairs running and informs everyone that health minister’s daughter Ruby accused Abhimanyu of molestation. This news shocks Birlas and Abhimanyu recalls Ruby’s threats. Manjari says her son can never do this. Harshvardhan says her words or thinking doesn’t matter as there is now a controversy between health minister’s daughter Ruby and top heart surgeon Abhimanyu Birla. Harshvardhan thinks about Birlas reputation and image. Anand says Abhimanyu can even get arrested because of the molestation charges. Manjari requests Anand to help Abhimanyu. Parth requests Shefali the same.

Shefali says that no one will trust her because she is Abhimanyu’s sister in law. She says that everyone is spreading this news on social media and it is getting viral. Anand says they need a solid proof to prove Abhimanyu’s innocence. Mahima asks Abhimanyu if he is sure that he even by mistake did not touch or push Ruby. Neil says they have solid proof. Abhimanyu recalls and thinks Neil will tell everyone that Akshara was in the same room and is witness to his and Ruby’s conversation. He asks Neil to stop as there is no proof as CCTV cameras were not working properly since morning, he checked himself.

Neil understands that Abhimanyu doesn’t want to involve Akshara in all this. Akshara stops singing seeing her family return. She goes to tell them what happened in the Birla hospital and how she helped Manjari organize Abhimanyu’s birthday party. Aarohi comes there and interrupts Akshara. Scared Akshara and the whole Geonka family gets shocked, when Aarohi reveals that the health minister’s daughter Ruby accused Abhimanyu of molesting her. Manish says that he already knew Abhimanyu is not a right man. He says that Abhimanyu even created confusion between Aarohi and Akshara. Manish calls Abhimanyu a rich spoilt brat. Akilesh agrees with Manish and says why will a girl insult herself in front of everyone.

Aarohi and Swarna says Abhimanyu can’t do anything like this. Manish says that the health minister’s daughter cannot falsely accuse Abhimanyu for money, so maybe she is right. He continually insults Abhimanyu. Akshara feels bad hearing Abhimanyu’s insult. On the other hand, Birlas tries to find a solution to prove Abhimanyu’s innocence and get him out of the mess. Neil asks Abhimanyu to tell everyone that Akshara is the witness to his and Ruby’s conversation and even Ruby doesn’t know about it. Back at Goenka Mansion, Manish continuously insults Abhimanyu. Akshara asks him to stop. She says that Abhimanyu did nothing as she saw what happened with Ruby.

This shocks Goenkas. Akshara reveals that she was in the same cabin with Abhimanyu. Goenkas gets shocked and Aarohi feels angry. Abhimayu gives Neil his swear to not tell anyone about Akshara’s presence in his cabin. Akshara tells everyone that Abhimanyu is not a bad man. Manish gets angry and asks Akshara what she was doing in Abhimanyu’s cabin? Akhilesh tries to save Akshara from Manish’s questions and anger. He says Akshara may have reached Abhimanyu’s cabin by mistake. Angry Manish says a person by mistake cannot reach any wrong hospital from home. He asks Akshara to explain herself.

Akshara reveals that she went there to help Manjari bring a smile on Abhimanyu’s face and help the latter to move on in life. She explains that her intentions weren’t bad. Aarohi asks Manish why Akshara is allowed to do anything but not her. Swarna tries to stop Manish’s anger. Manish again asks Akshara how she can help someone who insulted them. Akshara requests Manish to talk about it later and think how to save Abhimanyu from false charges. Manish declares that nobody will talk about Abhimanyu and Birlas from now onwards. Everyone leaves Akshara upset and crying. Goenkas family picture frame breaks hurting and scaring Akshara more.

Birlas discuss that they need a witness to prove Abhimanyu’s innocence. Harshvardhan agrees and says that Ruby’s case is strong because of her being a woman as everyone will believe her only. He says that he already warned Abhimanyu to not talk rudely with Ruby. He says now Abhimanyu’s character will be questioned. Abhimanyu defends himself and says that Ruby had intentions not him. Anand asks them to stop arguing and think carefully. Mahima says that their reputation will get ruined now and Abhimanyu’s medical license can even get cancelled. Abhimanyu explains that he is innocent and is going to handle his patients.

Abhimanyu says he will handle everything if his family can’t. Anand says to Abhimanyu that his family will handle everything. Neil requests Abhimanyu to tell everyone about Akshara. Abhimayu tells him he can’t and leaves. Manjari sees them talking secretly. She asks Neil if Akshara saw anything as he sent her to decorate Abhimanyu’s cabin. Manjari understands that Abhimanyu asked Neil to not reveal anything to anyone. Akshara cries and thinks that she will convince her family. She further thinks that being a doctor is Abhimanyu’s life not just profession.

Akshara tries calling Abhimanyu from her mobile and landline but the latter is seen thinking that the press may be calling him. He picks up the call after some time. Akshara doesn’t say anything on the call and Abhimanyu understands that it’s Akshara who called him. Akshara decides that she will not let anything happen to Abhimanyu. Manjari comes to Abhimanyu’s room with Neil. She asks him to take Akshara’s help as she cares about him a lot. Abhimanyu understands that Neil told Manjari everything. Akshara records a voice message for Manish. In the voice message she requests Manish to let her support the truth and Abhimanyu.

Neil tells Abhimanyu to not worry about Akshara. Abhimayu says he doesn’t want Akshara’s name to get involved in all this as it may affect her reputation too. Abhimayu asks them to let him stand alone in life and molestation case. Akshara thinks that she will stand with Abhimanyu in this case. In the next episode, Harshvardhan will ask Abhimanyu to recall if there is any proof or was there any witness to prove his innocence. Manjari will blurt that Akshara is the witness. Harshvardhan will say that they will get to know the truth by visiting Goenkas and questioning Akshara. Abhimanyu will get angry and tell Harshvardhan that no one will visit Goenkas.

Reviewed Rating for Yeh Rishta 2nd December 2021 Written Update Akshara’s decision: 3/5 This rating is solely based on the opinion of the writer. You may post your own take on the show in the comment section below.