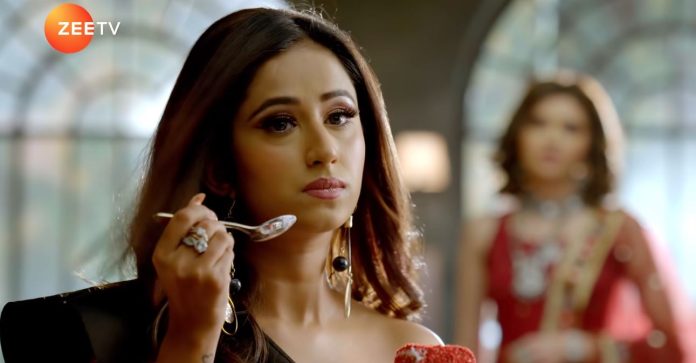 Bhagya Lakshmi 7th December 2021 Written Update Malishka’s plan Rishi tries to call Malishka, but she doesn’t answer his calls. She tells that she isn’t foolish like Lakshmi to get convinced by him so easily. Rishi climbs a ladder to reach her balcony. He meets Malishka and requests her to not marry Viraj. He tells her that he is with Lakshmi just for one year, then he will get married to Malishka. He tells that after a year, he will marry her. Lakshmi and Ayush come to meet Malishka. She rings the bell. She tells Ayush that maybe there is nobody at home. Rishi goes to check the door. Lakshmi tells Ayush that they will come tomorrow. Before they leave, they hear Rishi’s voice. Rishi tells that he is just coming. He opens the door. Lakshmi is shocked to see him.

She challenges him. He tells that he doesn’t want to hurt anyone, but he has no option left now. He adds that he will tell the truth to Viraj right away. Viraj finds Rishi angry and wonders what’s the reason. Lakshmi finds a poor beggar in danger. She runs to save that beggar. Rishi runs with concern for Lakshmi. The beggar blesses Lakshmi to get a loving husband. Lakshmi tells that she already has a loving husband. Rishi fails to tell the truth to Viraj and Lakshmi. Stay tuned.

Rishi thinks he isn’t able to tell the truth to Lakshmi again. He feels he always misses to keep his word. He is scared that anything could have happened to Lakshmi. Malishka confronts him for failing again. She asks him not to tell her to speak the truth to Viraj. Lakshmi thinks Rishi got upset with her after seeing her stunt. Viraj asks Rishi to just come. He compliments Rishi to get such a good wife. He calls Rishi lucky. Malishka gets enough hearing Lakshmi’s praise. Viraj is still doubtful seeing Malishka’s weird behavior. He tells that he isn’t able to handle her mood swings.

Rishi and Lakshmi praise Malishka who would love Viraj a lot. Lakshmi tells that Malishka has still kept her friendship with Rishi, while many friends move on. She calls Malishka a lovely person. She tells that one should get a life partner who makes life looks simple and easy to live. She describes the qualities of a life partner. Rishi gets to think of Lakshmi. He thinks why is he thinking of her instead Malishka. Viraj believes that she is saying right. He also wants to experience such peace when he marries Malishka. He tells that he will spend time with Malishka and then know if he feels such for her. Lakshmi tells that she feels this kind of love for Rishi. Viraj leaves Rishi and Lakshmi together.

Rishi is really Lakshmi’s love. He is troubled by his guilt, and also the fear of losing Malishka. He calls Malishka and wants to speak to her once. Malishka doesn’t want to talk to him. She wants him to come home and speak to her. Rishi realizes that she will not speak on the call. He rushes to meet Malishka. He lies to Lakshmi that he has to go to office for urgent work. Lakshmi meets Ayush and seeks his help. She tells that she needs his help to give the Kalava thread to Malishka, because she is getting married. She tells that she wants to tie the Kalava to Malishka’s hand. He agrees to take her to Malishka’s house.

She decides his clothes. He calls her too good. He asks her to teach her good qualities to Shalu as well. Malishka waits for Rishi. She goes to the balcony and finds Rishi coming. She doesn’t want to smile and hint that she was eagerly waiting for him. Lakshmi and Ayush come home at the same time. They don’t see Rishi climbing the ladder. Malishka asks Rishi what is he doing.

She asks him did he come alone or get his Lakshmi along. He asks her to stop it and not be upset on him. He apologizes to her. She tells that its his daily thing to apologize to her, since Lakshmi came in his life. He tells that she just thinks of herself. He asks her to think of him once, they are mature enough and can wait for each other to unite by sorting their problem. He tells that he will marry her after a year. He asks her not to marry anyone. He confesses that he loves her a lot. He goes to check the door, unaware that Lakshmi is ringing the bell.

Lakshmi tells that its too late, maybe they should have not come. Ayush tells that Malishka will come. They decide to go back if no one opens the door. Ayush jokes on Malishka. They hear Rishi’s voice and get confused. Ayush doesn’t want Lakshmi to know about Rishi. Karishma asks Sonia what problem is going on between the sisters. Sonia complains about Ahana and Devika, who are fighting with her because of Lakshmi. Devika complains of Sonia to Karishma. Ahana also thinks that Sonia always dominates them. Karishma asks them to help each other. She can’t see them fighting.

Lakshmi tells that she felt its Rishi. Kiran asks Lakshmi and Ayush to come in. She tells that she got a Kalava for Malishka, so she has come at this time. Rishi hides and looks at them. Lakshmi tells that she wants to save Malishka from bad sight. She ties her the Kalava which she got for Malishka from the temple. Ayush calls Rishi to find out where is he. Rishi drops his phone and gets spotted by Ayush and Lakshmi. They are shocked to realize that Rishi was hiding in Malishka’s house. Stay tuned.

Reviewed Rating for Bhagya Lakshmi 7th December 2021 Written Update Malishka’s plan: 3/5 This rating is solely based on the opinion of the writer. You may post your own take on the show in the comment section below.