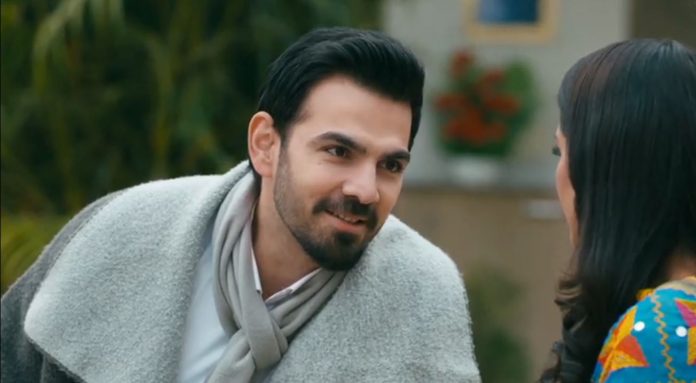 Udaariyaan 7th December 2021 Written Update Angad’s past Tejo joins Angad’s company who works for the uplifting the small scale industries. He convinces her stating that the company goal is to empower the women and make them financially independent. Tejo likes to be a part of the good cause. He is relieved that she took his help by siding away her annoyance. She apologizes to him. Angad doesn’t feel bad. Jasmin plans to go to the academy and find out Tejo’s whereabouts. She doesn’t want Tejo and Fateh to live in peace. Jasmin meets Sweety to tell her further plans of locating Tejo. She grows angry that Tejo is living happy with Angad. She breaks a glass bottle in rage and ends up hurting her own hand.

Sweety worries seeing Jasmin’s bleeding wound. Jasmin tells that she will heal the wound only when her revenge on Tejo gets fulfilled. Fateh has lost his wallet, and takes up the cleaner’s job in the lodge to get a room for himself. He struggles for a living. Angad finds Tejo talking to Riya. Tejo asks Riya if she doesn’t miss her mum. Angad doesn’t want Tejo to interfere in his matters. He stops Tejo from learning his past. What past is Angad hiding about his wife? Do you think the show is losing the track from the main plot?Keep reading.

Earlier in the show, Tejo looks for some job, while Fateh goes back to the lodge to request the man to give him a room. Fateh apologizes and agrees to wash the utensils just to get a shelter. Tejo returns to Angad’s place and finds his behaving rudely with Riya. She fails to understand his behavior and rebukes him. She tells him that she couldn’t find any job. Angad hires her in his company in Shimla. She takes up the work. She later apologizes him for her harsh words. Angad tells that he didn’t feel bad of her words and he can forgive her for every mistake. Angad and Tejo bond, while Jasmin prepares to wreck their lives.

Fateh finds hard to do the cleaning work, which he never did before. He finds the men laughing at him. He recalls his parents words. He feels they always pampered him and treated him like a prince. Tejo helps Riya in her project. Riya asks her how did she learn making the scarecrow. Tejo recalls her parents. She is also sad just like Fateh. Angad asks Riya to go and have food. Riya doesn’t listen to him and gets scolded. Jasmin meets Sweety by concealing her identity. She tells that nobody can recognize her. She reaches Angad’s office to find out where did Angad take Tejo.

Sweety asks her to spare Tejo now, when the latter already left. Jasmin blames Tejo for being the reason for her life’s sorrowful phase. She wants to give the sorrow back to Tejo. Sweety asks her not to harm herself by her hatred. Jasmin tells that she will fulfill her Canada dream later, but first take her revenge on Fateh and Tejo. She hurts herself and then tells that she will not let the wound heal until her revenge is fulfilled. She meets Rajat to know about Fateh and Tejo. He tells her that he can’t tell her anything about his boss. Her mask falls off. He sees her and gets confused that she is Jasmin.

Jasmin rushes out before he identifies her. Sweety tells that maybe Rajat has identified Jasmin. She asks if Fateh is with Tejo and Angad. Jasmin suspects if Fateh and Tejo have run away somewhere together. She tells that Angad can’t leave his work and disappear for someone’s sake. Rupy feels burdened by the secrets of Fateh and Tejo. He finds Khushbeer in sorrow, but can’t tell him anything. Khushbeer is more worried for Tejo than Fateh. He cries for his children.

Rupy consoles him. He is helpless that he can’t tell anything to Khushbeer. Angad apologizes to Tejo for his rudeness. He asks her to understand that Riya’s case is complicated. He doesn’t want Riya to get attached with Tejo. Tejo tells that Riya needs love and attention. She asks him why does he behave badly with Riya. She tells that she has seen him bonding well with others. He replies that Riya is different. She tells that he should love Riya a lot. He doesn’t answer her. She thinks the matter is too big that he is hiding things. Gurpreet is worried for Fateh. Fateh washes the utensils sadly.

Rupy misses Tejo a lot. He awaits her call. He gets restless to get her well-being. Jasmin suspects if Angad is trying to unite Fateh and Tejo. She knows that Fateh will not go to tell Tejo that he cheated her/Jasmin, Angad will be scheming against her and uniting the lovers. She hurts herself further. She wants to show her hatred and rage to Fateh. Tejo and Fateh miss each other a lot. Angad finds Tejo upset and tries to cheer her up. She tells that she isn’t thinking of Fateh now.

Satti finds Rupy upset and asks him not to think of Tejo so much. Tejo gets hiccups. She misses the family too. Rupy cries for Tejo. Angad takes care of Tejo. They get into a moment. She tells Angad that she shouldn’t stay in his house for a long time, because his neighbors can make news about them. She doesn’t want a trouble for Angad because of her. Angad makes Tejo wear the engagement ring back. He tells her that they will tell everyone that they are engaged. She is shocked by his move. Stay tuned.

Reviewed Rating for Udaariyaan 7th December 2021 Written Update Angad’s past: 4/5 This rating is solely based on the opinion of the writer. You may post your own take on the show in the comment section below.