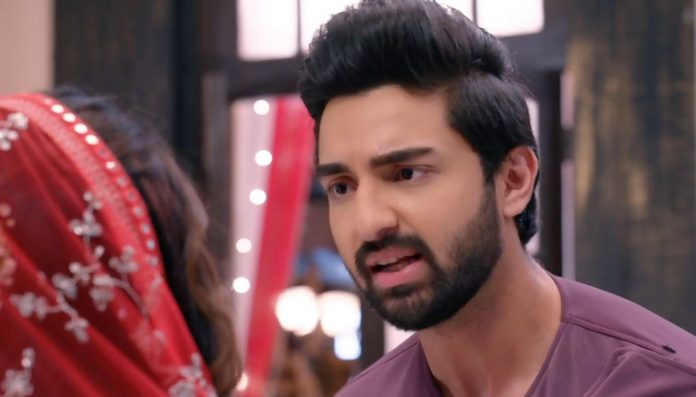 Bhagya Lakshmi 10th December 2021 Written Update Rishi’s blunder Rishi goes to meet Malishka after her Roka happens with Viraj. He fears of losing her. She asks him what is he saying, she just got engaged to Viraj. Rishi tells her that she only wanted to marry him. She tells that she told him, but he didn’t reply her. He tells that he was going to answer her, but Viraj and Dadu came there. He adds that he also wrote a letter for her. She asks him where is that letter. He tells that he doesn’t know about it. Lakshmi gets the letter fallen on the ground. She picks it and checks it to see what is it. Will Rishi and Malishka’s love affair gets known to Lakshmi? Keep reading.

Earlier in the show, Dadu tells that pandit has come and now they shall start the roka rituals. He asks for Lakshmi. He tells that Lakshmi is auspicious for his family, she convinced Viraj for the marriage, she will perform the roka rituals from his side. Lakshmi asks Rishi why doesn’t he want to tell her. She thinks it will be related to his business. Rishi asks how did she think of this. She tells that she is finding him too worried since a few days. She asks him not to think much about business, and live his life happily.

She compliments his caring gesture. Rishi feels guilty for his decision of leaving Lakshmi. She tells that he always conceals his feelings. She asks him to confess his feelings to her. Ayush disturbs their moment. He asks Lakshmi to come for the Roka, Dadu is waiting for him. She asks Rishi to always be with her.

Abhay tells Malishka that he saw her with Rishi and heard the conversation. He wants her to get married to Rishi, but its not her mistake that he is with her, he isn’t made for her. He tells that Rishi is now married. He has already explained her that she can’t get Rishi now. He tells that Rishi and Lakshmi are husband and wife in front of the society, Rishi can’t break Lakshmi’s heart. He advises her to move on. He asks her to see Lakshmi getting Rishi, holding his hand with the right of a wife. Malishka gets angry.

Abhay asks her to understand that Rishi can never leave Lakshmi. Lakshmi asks Rishi to leave her hand, else people will call her shameless. Dadu asks Abhay to get Malishka for the Roka. Abhay asks Malishka to make her mood better. Dadu tells the pandit that Lakshmi will do the shagun. Lakshmi tells that the elders do the rituals. Dadu tells that its his decision. She feels lucky.

Malishka tells that Dadu loves Lakshmi so much that he would have got her married to Viraj if she wasn’t married. Neelam asks them to do the roka on time. Dadu finds her scolding them. He laughs. Pandit instructs Lakshmi to do the shagun rituals. Lakshmi does the rituals. Rishi and Malishka see each other. Everyone congratulates Viraj and Malishka for their roka. Dadu tells them that the marriage will happen after 5 days. Malishka tells that Dadu had told this to her before itself. She asks Rishi to congratulate her. Rishi congratulates them.

Viraj and Malishka get the blessings and wishes from the families. Rishi tries to give the letter to Malishka, but she doesn’t meet him. He goes after her. Dadu takes the guests for dinner. He happily tells that he will attend the guests himself. Viraj takes Malishka with him. Rishi hands over the chit to Malishka. She feels giddy at the same time and drops the letter there. Viraj and Rishi get worried for her. Malishka tells that she is okay. Viraj takes care of Malishka. Lakshmi gets the chit fallen there. She picks it to see. Viraj asks Malishka to take rest. She tells that she wants to be alone for some time.

He tells that he is really happy that his best friend is becoming his wife, he feels secure now. He asks her to rest. Malishka feels guilty to cheat Viraj. She cries seeing the roka dupatta. Rishi meets her. She asks him why did he come now. He tells that he has come to marry her. She is shocked. Lakshmi loses the letter, which flies away and gets picked by Viraj. She takes the letter from Viraj. She tells that its Rishi’s letter, its about his business. He asks is it any love letter.

Rishi asks Malishka to marry him. She tells that she just had her Roka done. He tells that he is also married, she wanted to marry him for her mental peace. He adds that he had written a letter for her, but she dropped it outside. He asks Malishka to marry him right away. She refuses to him. He asks her what’s her problem that she is refusing when he is agreeing for the marriage. He tells that he loves her, he will marry her. She sternly refuses. He accepts her decision. He is fed up of her tantrums. She asks him to keep requesting her. He confesses his love to her. Neelam overhears their conversation.

Rishi asks Malishka to please marry him. He is frustrated over the happenings. Malishka hugs him with love. Neelam worries seeing Viraj’s Dadu coming that way. She stops Dadu and asks him about Viraj. Dadu tells that he would be with Malishka. She tells that there is nobody in the room. He tells that he will help her. She diverts him. Lakshmi hands over the letter to Viraj. She takes it back and says Rishi would not like it, they can’t read the letter without Rishi’s permission. Viraj tells that there shouldn’t be any secret between husband and wife, she doesn’t need Rishi’s permission to read the letter. He jokes that Rishi may really write a love letter to someone.

She tells that every relation does have some limits, husband and wife should be supportive, not selfish. She gives him some marriage tips. She tells that she will go to Malishka and see her excitement. He tells that Malishka was really anxious to step into a new life. Viraj wishes that Lakshmi gets all the happiness in her life. Malishka tells Rishi that she wants to get married to him, she is really happy because of him. He apologizes for troubling her so much. She tells that he took much time in saying yes. He hugs her with love.

Reviewed Rating for Bhagya Lakshmi 10th December 2021 Written Update Rishi’s blunder: 3/5 This rating is solely based on the opinion of the writer. You may post your own take on the show in the comment section below.