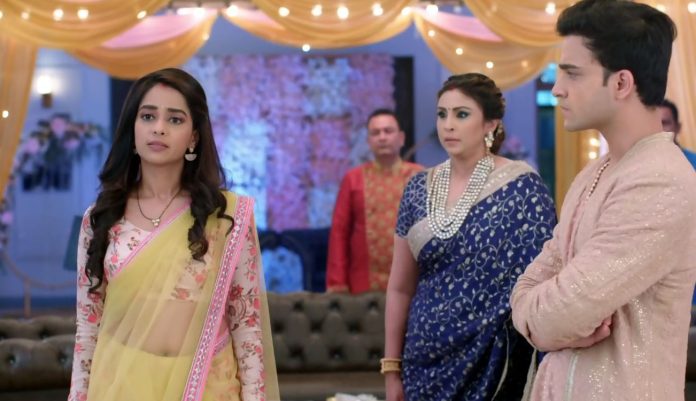 Ranbir is shocked to know what Rhea has done. Pallavi tries to save Rhea some how. Prachi tells that even Pallavi will get jailed if she supports Rhea. She alerts that Rhea can send Pallavi to jail to make her punishment lesser. She requests Pallavi to stay out of it. She asks the inspector to arrest Rhea, she has done a fake marriage, and now she should see her real Sasural, that’s the jail. Rhea angrily attacks Prachi. Prachi shoves her away. Rhea gets falling. Pallavi holds Rhea and feels sorry for her. Rhea loses her temper.

Prachi and Rhea’s huge drama goes for a long time. Prachi asks the inspector to take Rhea away. The police catches Rhea and drags her out of the house. Rhea requests Ranbir and Pallavi to save her. She doesn’t want to get jailed. Prachi pities Rhea and asks the Inspector to leave Rhea free. She tells that she will keep Rhea in her house and teach her a lesson, she will punish her sister and bring her to the right path.

Prachi saves Rhea from the arrest. Rhea isn’t thankful to Prachi. She wants to make Prachi’s life hell. Prachi isn’t a weak person this time. She is determined to fight Rhea and defeat her. After all the dragging drama, the outcome is nothing, but just family politics again. Rhea and Prachi’s homely game plans to outdo each other will be seen. Do you think Prachi made a mistake by keeping Rhea home again? What would Rhea do now to break Ranbir and Prachi’s marriage? Keep reading.

Prachi questions Ranbir why is he angry, that she signed the paper or on knowing that the signatures are fake. She tells that the court didn’t pass the orders. Inspector tells them that the divorce won’t be accepted, Prachi is still Ranbir’s wife. She adds that she didn’t come to prove anything, she has come to take her rights back in the house. She tells that she will not leave from Kohli house, she will fix the wrong that happened with her. She asks who has forged the signatures, she has to find out who wants Ranbir and her marriage to end. Rhea tells that there is nobody to forge the signatures.

Prachi tells that she didn’t take anyone’s name, but Rhea has come ahead to lie. Rhea tells that court will pass the orders. She lies that Prachi has herself signed the papers. Prachi catches her hand to show the ink stains to everyone. Ranbir stands as a dumb fool and watches the drama when Prachi exposes Rhea’s move. Prachi tells that Rhea is doing a fraud, its a legal crime to forge someone’s signatures especially on the divorce papers. The NGO ladies scold Rhea for this huge fraud. They ask Inspector to arrest Rhea.

Pallavi stops the police. Prachi threatens Pallavi about Rhea’s crimes. She tells that Rhea can save herself by putting the entire blame on her. She adds that Rhea is very talented and can frame anyone to save herself. She makes Pallavi tensed. Prachi tells that Rhea can send Pallavi to the jail. She asks Pallavi to stay out of her matter. Dida smiles watching Prachi’s daring drama. Prachi asks Inspector to take Rhea to her real Sasural. Rhea attacks Prachi, who pushes her away. Pallavi saves Rhea.

Prachi tells that she will not tolerate anything now. She asks Rhea not to force her to cross her limits. She tells that she will punish everyone who did a crime. Dida likes to see Rhea and Pallavi speechless. Inspector arrests Rhea, who panics and apologizes to save herself. She tells Prachi that she often misbehaves, but she is still her younger sister. Prachi tells that Rhea quickly changes her colours. She isn’t the old Prachi to forgive her. Rhea asks Ranbir to save her. Pallavi asks Prachi to think about her sister once. Vikram and Pallavi request Prachi to let Rhea free.

He tells that Prachi can teach a lesson to Rhea in some other way as well. Rhea cries a lot. Prachi stops the police. He withdraws the complaint against Rhea. She tells the Inspector that she will punish Rhea by keeping her home. She is confident that she can handle her sister’s madness. Inspector tells that Kohlis would have got punished if Rhea went to the jail. He supports Prachi. Prachi regrets that her family doesn’t love her. She tells him that she will fight to win her family back. She wants to stay in the Kohli house. Inspector warns the Kohlis against hurting Prachi and ousting her.

He tells that Prachi will stay in the house with her rights. NGO lady asks Prachi to call her if anyone troubles her. She tells that she will compel Kohlis to give away half their property to Prachi if they dare hurt Prachi in any way. Ranbir asks her what can he do, if he doesn’t want to stay with Prachi. The lady asks him to apply for divorce and follow the legal procedure, without cheating Prachi. She tells that they can get separated, but not by making fake papers. Prachi thanks the NGO ladies. The lady says they will visit soon to see if Prachi is okay.

After the NGO ladies leave, Prachi asks the servant to get her bags to Ranbir’s room. She thinks she just wanted Ranbir’s love, but she just got cheated in return. She wants to win the battle of her rights. Prachi enters his room and finds it decorated. She remembers their moments. She doesn’t want him to sleep in peace after ruining her life. Ranbir apologizes to the guests for the bad experience. Shaina asks Rhea if she should leave. Rhea asks her to come with her. Ranbir asks Shaina to wait, he has to talk to Rhea first. He questions Rhea, Vikram and Pallavi about the fake divorce papers.

Rhea asks what does he want to ask. Pallavi supports Rhea. She tells that Prachi has created a big drama in the house. She asks him to spare Rhea, and ask everything to them. Ranbir shouts and asks her the reason about the divorce lie. He tells that he didn’t know the truth. Pallavi asks him if he is blaming her for the lie. Ranbir tells that she has lied that he signed the divorce papers. Rhea asks him to calm down and talk later. Ranbir asks Rhea about the ink stains on her thumb. He tells that Prachi had stained her name forever, that she forged Prachi’s signatures.

He tells that its a disgusting thing that Rhea and Pallavi did, its a crime to forge someone’s signatures. He argues with Rhea and Pallavi. Rhea tells that she is really tired explaining him. She tells Ranbir that she has always loved him, she was helpless to stay with Siddharth. She feels he is his wife now. Ranbir tells that their marriage isn’t legal. Vikram and Pallavi want Ranbir to accept Rhea as his wife, even if the marriage is not valid. Ranbir tells that he was wrong, Prachi didn’t move on with Siddharth, Prachi is still thinking of their marriage. He defends Prachi and gets reprimanded by Pallavi. Keep reading.

Reviewed Rating for Kumkum Bhagya 10th December 2021 Written Update Shocking arrest: 5/5 This rating is solely based on the opinion of the writer. You may post your own take on the show in the comment section below.