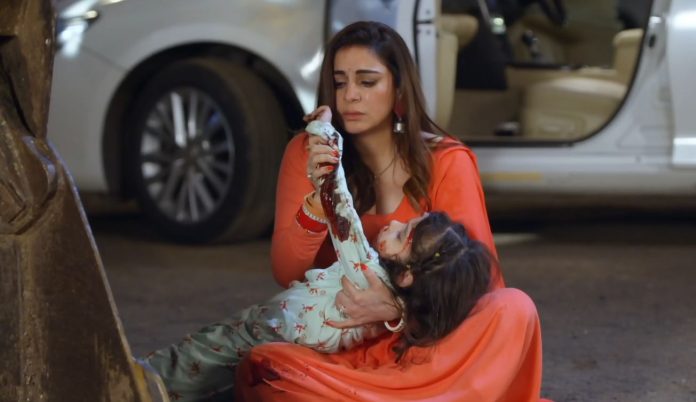 Kundali Bhagya 9th December 2021 Written Update Pihu dead Karan tells Preeta that Rajiv has told them the truth that she has planned Pihu’s kidnapping. Preeta asks Karan did he believe the kidnapper against his wife. She asks him won’t he believe his wife. She tells that Sonakshi had hired the kidnappers, she had done this drama. She adds that she loves Pihu a lot. Karan asks her where is Pihu. Preeta tells that Sonakshi is so wicked that she has hurt her own daughter. Sonakshi tells that she is Pihu’s real mother.

Preeta asks her why is she lying after torturing Pihu so much. She tells them that Pihu fainted down, she has admitted Pihu in the hospital. She adds that Pihu has seen Sonakshi’s face there, she knows that Sonakshi got her kidnapped. She asks Karan to come with her and get Pihu from the hospital. Mahesh collapses down. Karan takes care of Mahesh. He asks Preeta to go and get Pihu home. Kritika tells that she will go along with Preeta. Sonakshi gets scared that Pihu might take her name in front of the family.

Preeta drives to the hospital to bring Pihu back. Sherlyn asks Sonakshi why is she so scared. Sonakshi asks how is Preeta so smart. She tells that she had made everyone doubt Preeta, but now Pihu will come home and tell the truth. She tells that Pihu has really seen her there. She adds that Pihu got to know that she kidnapped her, and Preeta came to save her there. Sherlyn asks Sonakshi to convince Pihu by her lies.

Sonakshi calls the killer to get Pihu killed. She tells that the murder should appear like an accident. Sherlyn is shocked to hear this. She asks Sonakshi not to harm Pihu. Sonakshi tells that she will get even Preeta killed. She tells Sherlyn that once Preeta and Pihu die, then she can live her life well. She informs the killer about the hospital where Preeta went. Preeta and Kritika meet Pihu at the hospital. The killer reaches Preeta’s car and damages it. Pihu gets conscious and meets Preeta. Preeta hugs her with love.

Preeta asks her not to feel scared, she will handle Sonakshi. She takes Pihu to the car. Karan calls a doctor for Mahesh. Doctor advises them to keep Mahesh away from stress. Rakhi asks Karan not to leave them. Rakhi cries a lot. Mahesh asks Karan to call Rishabh home, just Rishabh can handle this situation. Sonakshi shows her fake concern for Mahesh. She apologizes to them for giving them so much stress. Sherlyn tells that they can understand what she is going through. She lies to the family that Sonakshi fainted by stress.

Mahesh insists Karan to call Rishabh. Karan tells that Rishabh’s phone is switched off. Sonakshi gets the killer’s call. She goes out to take the call. The killer wants to inform her that he did the work. Sonakshi wants a confirmation once. Sherlyn asks her to be with the family and fake a bit of sorrow. Sonakshi tells that she is calling the contract killer Santosh to know if he did the work. She receives his call. He tells that he will soon give her a good news about the accident. Sonakshi tells her evil plan to him. Sherlyn is shocked to hear her. She can’t believe that she is getting her daughter killed. She calls Sonakshi heartless.

Sonakshi tells that she just loves Karan. She tells that she will now go and do a drama of a good mother. Karan calls Preeta. He fails to get through. He calls Kritika to know about Preeta and Pihu. She tells that she has sent Pihu home with Preeta, Pihu is safe and would be coming to him in some time. She asks him not to worry. Karan thanks her. Karan recalls Preeta’s love for Pihu. He remembers the way Preeta used to handle Pihu with much love and care. He can’t believe that Preeta can plan the kidnapping just for money.

Sonakshi keeps a watch on Karan. She fakes her concern. She thanks Karan for saving her and their daughter. He tells that Pihu is Preeta and his daughter. She apologizes for being emotional. He tells that everyone is emotional about Pihu. She asks him what does he think, did Preeta really kidnap Pihu. He tells that Preeta can never hurt her own daughter, he will bring out the truth soon. He tells that he believes Preeta. Sonakshi gets angered on hearing this. Elsewhere, Sarla calls Shrishti, who is still hospitalized. She gets worried for her daughters when the stormy winds get close to extinguish the diya/lamp light in the temple.

She suddenly gets a thought that Preeta is in danger. She cries and prays for her daughter. Sherlyn tells Sonakshi that she has tried to hurt her own daughter for Karan’s sake, but she will never win Karan. Sonakshi asks her to just rejoice that Preeta is leaving from their lives permanently. Preeta and Pihu fall in a huge danger. Sonakshi asks the killer to send her the pictures of Preeta and Pihu’s dead bodies. Preeta and Pihu meet with a deadly accident. Pihu falls out of the car and gets severely wounded. Preeta screams and checks Pihu’s pulse. She gets scared sensing Pihu is dead. Will Pihu really die? Will Preeta be able to save her, or get punished by the Luthras for losing Pihu forever? Keep reading.

Reviewed Rating for Kundali Bhagya 9th December 2021 Written Update Pihu dead: 0/5 The worst scripted twist till date in this show This rating is solely based on the opinion of the writer. You may post your own take on the show in the comment section below.