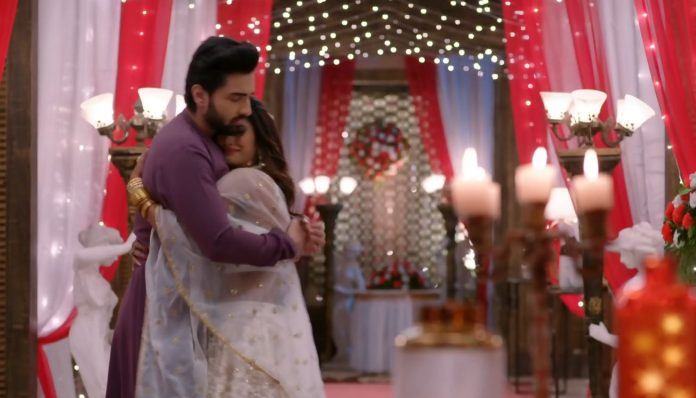 Bhagya Lakshmi 11th December 2021 Written Update Secret wedding Rishi meets Neelam and Karishma, who confront him about his secret marriage proposal to Malishka. Neelam is upset that he has promised to marry Malishka. Rishi tells Neelam that Malishka isn’t ready to wait for him for one year, and now he can’t leave Lakshmi either. Karishma asks what does he mean that he can’t leave Lakshmi. He tells that he has to stay with Lakshmi for a year to save his life, but he has to marry Malishka for the latter’s peace of mind. He asks Neelam to permit him for the marriage, that’s just meant to give an assurance to Malishka.

Later, Rishi takes Malishka for shopping. She tells that she wants the best bridal dress for her marriage. She adds that the bridal dress is really an important thing for the bride. Rishi and Malishka are in the same mall where Lakshmi has come with Viraj to buy the bridal dress for Malishka. Lakshmi and Rishi crash into each other. Will they have a hit and miss or see each other? Keep reading.

Earlier in the show, Viraj tells that there shouldn’t be any secret between husband and wife, she doesn’t need Rishi’s permission to read the letter. He jokes that Rishi may really write a love letter to someone. She tells that every relation does have some limits, husband and wife should be supportive, not selfish. She gives him some marriage tips. She tells that she will go to Malishka and see her excitement. He tells that Malishka was really anxious to step into a new life. Viraj wishes that Lakshmi gets all the happiness in her life. Malishka tells Rishi that she wants to get married to him, she is really happy because of him. He apologizes for troubling her so much. She tells that he took much time in saying yes. He hugs her with love.

Rishi asks Malishka not to tell anyone about their secret marriage. She jokes that she won’t tell it to Lakshmi. He tells that Neelam shouldn’t know about it, else she will be much upset, she wants him to respect the marriage. She agrees to keep it a secret. She tells that she doesn’t like him caring for Lakshmi. He tells that they will not talk about Lakshmi. She asks him to talk about Viraj. He promises that he won’t care for Lakshmi. Lakshmi comes there. Rishi asks Lakshmi not to doubt on Malishka and him, that they are having an affair. She apologizes for doubting him before.

She tells that she can never doubt them, knowing they are good friends. He also apologizes. She tells that she came to see if Malishka is happy, she doesn’t need to worry now, when he is with him. She gives him the letter. Rishi asks her how did she get it. He worries that she may have read the letter. He asks her did she read it. She tells that she didn’t read it. She goes from there, and bangs her head on the door by mistake. She gets hurt. Rishi worriedly rushes to care for her. Malishka gets angry on him. She remembers Abhay’s words that Rishi can never break Lakshmi’s heart. She tries to leave from there, but Rishi stops her as well. He holds Malishka’s hand. She leaves in rage.

Rishi asks Lakshmi is she okay. Lakshmi tells that she is okay now. He asks her to be careful. He takes care of her. She asks where did Malishka go. He asks her to not get hurt all the time. She asks him not to scold her. He apologizes to her. He tells that its anger is his natural reaction. She adds that nothing will happen to her when he is with her. He asks what will she do when he isn’t with her. She asks him to scold her a lot, but never say that he won’t be with her. She tells that they will always stay together, she exists because of him. She expresses his love to him.

Rishi tells that he can’t promise her that he will always be with her, he isn’t suitable for her. She threatens to cry. She asks him to say sorry. He says sorry to her. She tells that he is written in her Bhagya, she has no one in her life except him. She feels lucky to get him. She tells that he will always be of her. She cries seeing him. Rishi also cries and makes an excuse. She cares for him. Ayush meets them and breaks their moment. He tells that everyone is calling them. Neelam is tensed and recalls Rishi’s promise to Malishka. She asks Karishma to call Kiran home tomorrow.

Karishma calls Kiran and asks her to come home to meet Neelam. Kiran asks the reason. Karishma tells that Neelam looks stressed, there is something serious. Kiran finds Malishka angered again. She asks Malishka what’s the reason that Neelam called her home for a meet. She asks if anything happened between Rishi and her. Malishka hides their secret. Lakshmi finds Rishi worried again. He apologizes for rudely talking to her. She tells that there is no problem between them, they won’t break their marriage for a little thing. She accepts her mistake of doubting him.

She tells that mistake happens by anyone, its a big thing that they realized it. She adds that no mistake is so big that it wrongs a relation which is made by love and faith. She asks him not to overthink, their relation is made of faith. She thinks she has hurt him, but will join back the broken faith again. Malishka doesn’t know if Rishi will marry her or not. She tells that she will know Rishi’s love and loyalty in the coming four days. Lakshmi falls asleep on the couch.

Rishi recalls their moments. He feels she trusts him a lot, she didn’t check the letter even once when she could have checked it, she never regards him wrong even on seeing his mistake. He feels guilty. He makes an apology to her. She wakes up and finds him upset. She asks the matter. He apologizes to her again. He can’t tell her that he is a liar, he is going to cheat her. He tells that he was just thinking that she is so good. She asks if she should become bad. He asks what if she gets hurt in the future, if anything bad happens with her. She worries.

Reviewed Rating for Bhagya Lakshmi 11th December 2021 Written Update Secret wedding: 2/5 This rating is solely based on the opinion of the writer. You may post your own take on the show in the comment section below.