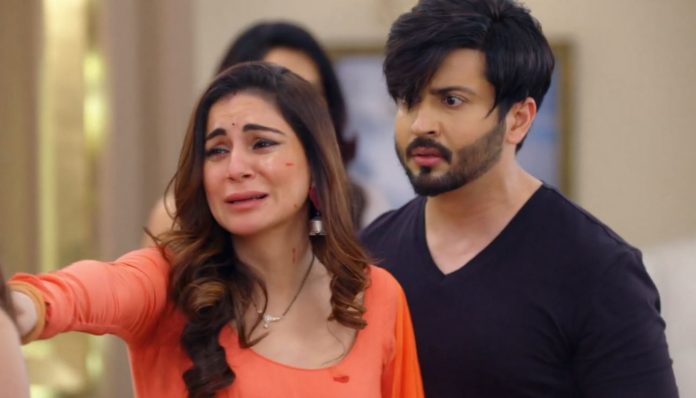 Kundali Bhagya 10th December 2021 Written Update Preeta exposes Sona Preeta drives Pihu towards the home. Santosh follows Preeta’s car. Preeta seems to know that someone is troubling her by following her car, but she doesn’t think much. Santosh calls Sonakshi and tells her that Preeta’s car is in front of his truck, he can hit her right away. Sonakshi tells that it should look like an accident. He tells that he is excited to hit the car. Preeta gives a side to the truck to go ahead, but Santosh still follows her car. She wonders why isn’t the truck going ahead. She speeds the car to get rid of the truck.

Preeta gets troubles when a heavy vehicle comes in front of her. She realizes that the truck is still behind. Pihu asks Preeta to drive faster. Preeta doesn’t know that the killer has damaged the seat belt and also the door lock where Pihu is sitting. Pihu’s hand unlocks the door by mistake. Preeta gets a shock on seeing the crane in front and the truck behind. She applies the brakes. Pihu falls out of the car and gets hurt.

She screams and shouts out Pihu. Karan gets his heart sinking and also gets hurt when he senses that something is wrong. Santosh clicks their picture. He flees from there. Preeta checks Pihu’s pulse and cries. She asks Pihu to get up. She asks someone to help her in getting her daughter to the car. She is stunned when she doesn’t find Pihu’s pulse. She freezes and hugs Pihu. The police reaches the accident spot. They check Pihu’s pulse. Preeta tells the constable that Pihu is her daughter. They tell Preeta that Pihu is dead.

Preeta tells that Pihu is sleeping, she isn’t dead. The crane driver tells the police that Preeta was driving rashly and applied brakes, then the girl fell out of the car and died. The inspector tells that the girl died because of Preeta’s carelessness. He arrests Preeta. Karan tells Rakhi that something has happened. Rakhi asks him to have patient, Preeta will get Pihu home. She hugs him and pacifies him. Sonakshi gets Santosh’s message. She happily checks to see the two dead bodies. She is shocked to see Preeta alive.

She calls Santosh, who tells that she should be happy now that the work is done. She asks why didn’t he kill Preeta. He tells that he would have killed Preeta before itself, but she stopped him. She asks him what’s going on there. He tells that he left from the spot. He adds that Preeta will be accused for the accident. Sonakshi asks him to confirm the news. Preeta is arrested, while the police seals the spot. Preeta cries for Pihu and asks them to hand over Pihu to her. Sherlyn asks Sonakshi what is she doing.

Sonakshi tells her that Pihu is dead. Sherlyn is shocked to know this. She cries for Pihu. Sonakshi tells that Preeta will be accused for Pihu’s death, police will arrest Preeta and throw her in the jail. She asks Sherlyn to get happy that they get rid of Preeta and Pihu. Sherlyn calls her heartless. She tells that Preeta will get Sonakshi punished, she will get more dangerous after losing her daughter. Sonakshi asks Sherlyn to just rob the cash which Karan got for the kidnappers. She tells that they will accuse Preeta for the robbery also.

She asks Sherlyn to just finish the work fast and come back to the family. Preeta breaks down. She wants to have Pihu. Inspector asks Preeta to understand that Pihu is no more. Preeta scolds the Inspector for speaking such bad things about a little girl. He sends Pihu with the hospital staff. Preeta gets to see Pihu for the last time. She asks Pihu to get up. Preeta and Pihu are separated because of the police. Santosh keeps an eye on them. Kritika reaches home alone. She finds the family waiting. She asks didn’t Preeta come home.

Rakhi tells that Preeta didn’t come yet. Preeta is brought to the police station. She is put into the cell. Vinod reaches there and finds Preeta behind bars. She asks Vinod to help her. Vinod asks the Inspector to leave Preeta free. He tells that he knows Preeta well. The family passes the entire night while waiting for Preeta. They are worried for Preeta and Pihu. Preeta comes home alone without Pihu. Karan asks her about Pihu. Sonakshi asks Preeta where is Pihu. She reminds that Preeta went to get Pihu home and make her testify against her.

Everyone asks Preeta about Pihu. Preeta tells them that Pihu will never come home. She goes to Sonakshi and finds her doing a drama. She confronts Sonakshi for doing so wrong with a little girl. She asks Sonakshi why did she get Pihu killed. The family is shocked to know that Pihu is dead. They can’t tolerate this shock. Preeta gives them the shocking news of Pihu’s accident and death. The Luthras are shattered on knowing this. Karan asks Preeta what is she saying and why. Preeta tells Karan that Sonakshi got Pihu killed. She exposes Sonakshi’s evil truth that the latter plotted the deadly accident. Will the Luthras believe Preeta? Keep reading.

Reviewed Rating for Kundali Bhagya 10th December 2021 Written Update Preeta exposes Sona: 0/5 Really upsetting. Show should better end than bringing such passé looped tracks This rating is solely based on the opinion of the writer. You may post your own take on the show in the comment section below.