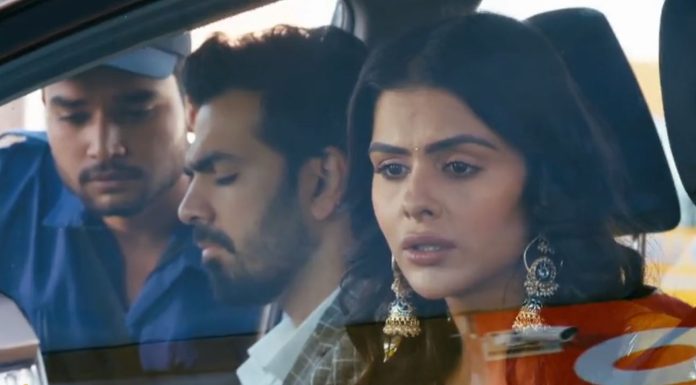 Udaariyaan 12th December 2021 Written Update Unexpected Tejo and Fateh miss out to see each other in the market, despite being really close. Angad and Tejo reach the highway petrol pump once again on their return to Shimla. Angad makes Tejo laugh by his funny and charming talks. They share a laugh. Angad calls out Fateh to get the fuel. Fateh doesn’t hear him at first. He goes to Angad’s car. He gets to see Tejo and Angad in the mirror. He is shocked to see them. He finds Tejo laughing happily.

Fateh is relieved that Tejo is with the right person. He wishes Tejo always stays happy with Angad. Fateh also gets spotted by Tejo. She sees him in the mirror. She gets confused and thinks how can Fateh be there when he is in Canada with Jasmin. She looks out to zoom into Fateh, but doesn’t find him. Fateh hides from Tejo. Will Tejo learn about Fateh’s repentance? Will Fateh be able to keep himself away from Tejo? Keep reading.

Earlier in the show, Angad and Tejo head to the market to enjoy cold Lassi, where Fateh also comes for his work. Tejo misses Fateh when she is with Angad. Angad meets his known people, who get upset that he didn’t invite them in his marriage. He tells that he is just engaged to Tejo. He buys bangles for Tejo on their insistence. Angad wants Tejo to consider their relation and really accept him. Tejo still thinks of Fateh, who is just away. Fateh senses Tejo’s presence around. He fails to see her in the crowded market.

Fateh and Tejo have a hit and miss in the market. Tejo asks Angad what was he saying about having four kids. Angad tells that such jokes are needed when it comes to answer some known people. He adds that the uncle and aunt she met are really close to him. He tells her that there are many such known people in Gurdaspur, before they come to ask about his engagement and marriage, they should just go away. Tejo and Angad enjoy their time. He reacts in anger when someone reminds him the accident of Arjun and Preet.

Tejo understands his emotions. Tejo tells him that she derives inspiration from him, he lost his family, but still tries to stay happy. She tells that she has lost a lot in her life, like Fateh and Jasmin, who meant a lot to her, but thankfully her family is okay. They head to the petrol bunk to get the fuel. Fateh also reaches the petrol bunk back from the market. He gives a treat to his fellow mates. He tells that he got his salary in advance. He tells them to have the snacks and enjoys, while he goes back to do his work.

Fateh finally comes across Tejo. He finds her happy with Angad, and quickly hides from her, but she also happens to see him. Tejo gets restless on sighting him. She gets down the car and looks for Fateh. Fateh hides from Tejo. He doesn’t want Tejo to know that he is in the country, not with Jasmin in Canada. He thinks if Tejo doesn’t find him, then she will consider it an illusion and go away.

On the other hand, Jasmin throws a party for Sweety and gifts her an expensive bag. She shows the expensive things she has purchased. She tells that she has got a new flat for herself, all by her own earnings. She plans to earn money, prosper and then take her revenge on Fateh and Tejo. Sweety asks her what is she doing now that she got so much money. Jasmin doesn’t tell her anything. She is happy that her plan is working. She gets too confident that she will write her own fate.

Fateh cries seeing Tejo from far. He just wishes that she always laughs and doesn’t get any sorrow in her life. Jasmin tells Sweety that she will not spare Fateh and Tejo, she won’t let them stay happy by ruining her happiness. She hurts her old wound and makes it bleed, shocking Sweety. She tells that Fateh has seen her love, and now he shall see her hatred. Sweety advises her to forget whatever happened and just move on. Jasmin tells that she will not stop her plans until she gets Fateh back.

She doesn’t want Tejo to win Fateh. Tejo rushes to find Fateh. She is confused if she has seen him or not. Fateh doesn’t want her to get heartbroken seeing him in this state. Tejo madly looks for him. Fateh is his first and true love. She wants him to stay happy. The thought that she has seen him as the cleaner shakes her down. She wants to confirm if she has really seen him. Fateh doesn’t come in front of her. Angad finds her disturbed and asks her if she is fine. Angad goes to get water for her.

Fateh cries on their separation. Tejo is still inclined to find Fateh. Angad stops her from going back to the petrol pump. He asks the matter. She tells that she felt like seeing Fateh. He tells that Fateh is in her heart, so she is strongly sensing his presence around. He pacifies Tejo. They both get stopped by the traffic police, who ask Angad to pay the fine for the speed driving. The police asks for his driving license. Angad lies to them that he was driving over the speed limits just to impress Tejo, who is soon going to become his wife. The Police spares him.

Angad shares the funny incident with Tejo. He shows the license to Tejo. Angad gets a call from his business client Sharma, who unknowingly drops his cash loaded wallet at the same petrol bunk where Fateh works. Fateh decides to go to meet Sharma and return the wallet. Fate is giving many chances to Fateh and Tejo to meet. Jasmin speaks of her hatred getting double for Fateh. She starts her revenge plan by targeting Tejo first. Keep reading.

Reviewed Rating for Udaariyaan 12th December 2021 Written Update Unexpected: 4/5 This rating is solely based on the opinion of the writer. You may post your own take on the show in the comment section below.