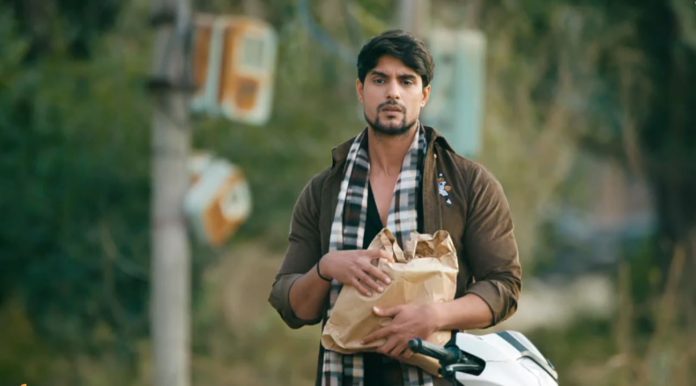 Udaariyaan 13th December 2021 Written Update Fateh’s fate Tejo keeps her friendship with Angad. Angad makes sure that she stays happy. Destiny plans a face off for Fateh and Tejo. They get close to meet in a different city, Rampur. Fateh’s good deeds will bring him in front of Tejo. Angad tells Tejo about Sharma, who is really important for him. He asks Tejo to play his fake fiancee in front of Sharma. He apologizes that she still has to play this drama. Angad tells Sharma that he will make him meet Tejo, when they meet for lunch. He informs Tejo about their Rampur trip. Tejo understands Angad.

She is okay to make their lie a truth in front of the work. She just wants her families to believe the lie. Angad and Tejo return home, and play with Riya. They enjoy a lot with Riya. Angad gets an unexpected visitor home. Angad is stunned to meet a woman, who comes there for Riya. Jasmin hires someone to find out Tejo. She wants to start her revenge by targeting Tejo first. On the other hand, Tejo feels she has seen Fateh once again when she visits Rampur. Tejo and Fateh come together in the narrow zone once again. Will they meet this time? Keep reading.

Earlier in the show, Angad shares the funny incident with Tejo. He shows the license to Tejo. Angad gets a call from his business client Sharma, who unknowingly drops his cash loaded wallet at the same petrol bunk where Fateh works. Fateh decides to go to meet Sharma and return the wallet. Fate is giving many chances to Fateh and Tejo to meet. Jasmin speaks of her hatred getting double for Fateh. She starts her revenge plan by targeting Tejo first.

Tejo is still confused about Fateh. Fateh takes permission from his boss that he will go to Rampur for a day to return the wallet to its owner. He gets praised for his good virtues. Fateh gets the bike keys. He leaves for Rampur. Jasmin fools busy in her new task of fooling and trapping another divorce client of the lawyer who hired her. Jasmin gets the pictured clicked with Aman. Aman recognizes her. He confronts her for blackmailing him for money. Jasmin tells him that she is just helping his wife in the divorce case, the lawyer has hired her for this work just to make the case strong. She adds that he will be proved of having an affair in the court now.

Aman gets scared and pays her a hefty amount to save himself. She realizes that Aman can help her in finding Tejo. She asks him to find out Tejo and bring any information to her. Aman agrees to help her. On the other hand, Rupy feels burdened with the truth that he can’t tell the family about Fateh and Jasmin’s fake marriage. The family hates Jasmin who made them cry so much before leaving for Canada. Rupy keeps the secret to himself. He thinks Jasmin would be doing wrong things to survive in the city, but he doesn’t care for her now. He leaves her on her fate. Jasmin tells Aman that dreams and a motive of revenge can make a person cross any limits. She wants to fulfill her revenge on Fateh and Tejo.

Tejo finds Riya upset and waiting for Angad. She recalls Fateh while talking to the little girl. She cheers up Riya by dancing with her. In the mean time, Angad arrives home. He also joins the dance. They appear like a happy family. They enjoy madly. Riya gets happy. Everything reminds Tejo of Fateh. Her old memories get flashing on her mind. She can’t help but miss Fateh. Angad enjoys his time with Tejo and Riya. He receives a shock knowing about the unexpected visitor. He quickly sends Tejo and Riya upstairs. He asks Tejo to take Riya to the outhouse from the back door. He tells her that he will tell her everything he is doing for Riya’s betterment. Tejo tries to ask him about the visitor.

He tells her that he will explain her later. Tejo takes Riya with her, while Angad handles Riya’s Nani. Nani tells that she has come to take Riya with her. Riya’s Nani wants to take Riya with her, and blames Angad for killing Riya’s parents in the accident. She calls him the murderer and doesn’t think Riya is safe with him. Angad tells that Riya wants to live with him, she is happy with him. He doesn’t want to send Riya away. He tells that he can take care of Riya. She asks him how can he look after Riya, being unmarried. She argues with him a lot, and doesn’t listen to him. She calls the police there to get Riya with her. Angad shows the court orders to her and asks her to just leave. Poice doesn’t help Nani, when Angad shows the court orders.

Angad asks Nani to just leave. Tejo tries asking Riya about her Nani, but gets no answers. Riya falls asleep. Tejo takes care of her. She wants to know the matter from Angad. Angad gets rid of the trouble and goes to see Tejo and Riya. Angad realizes that they have slept. He doesn’t see Tejo is awake. He wishes that their relationship was real, then he couldn’t have shared his life’s problems with Tejo. He wishes that he could really get Tejo in his life.

On the other hand, Jasmin gets the details of her new client. She gets the picture and finds Angad in the background. She finally tracks Angad’s location and tells that Tejo will also be with Angad. She is sure to find out Fateh as well. She thinks her revenge will be soon fulfilled. Later, Tejo and Fateh have a hit and a miss in the market. Fateh also feels her presence, just like she does, but they don’t see each other. They both head for Rampur to meet Sharma. Will they meet at Sharma’s house? Keep reading.

Reviewed Rating for Udaariyaan 13th December 2021 Written Update Fateh’s fate: 4/5 This rating is solely based on the opinion of the writer. You may post your own take on the show in the comment section below.