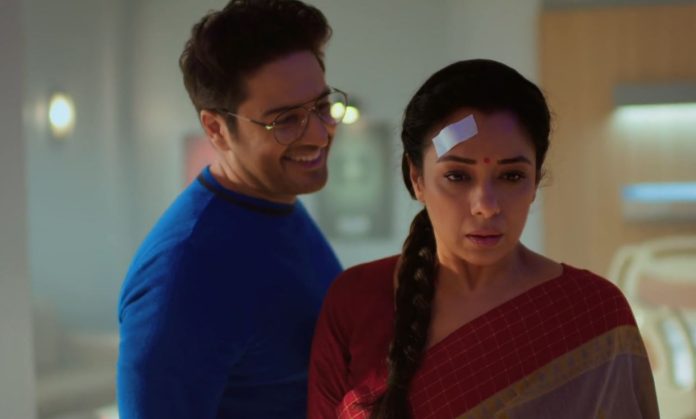 Anupama 13th December 2021 Written Update Malvika’s entry Anuj asks Anupama what she wanted to say to him. Anupama stutters and fails to confess her feelings to Anuj as the doctor arrives. Doctor greets Anuj and tells him that all his reports came back normal. He also tells Anuj that he is absolutely fine but he scared everyone as he came back from the edge of danger. Anuj thanks the doctor. Doctor tells Anuj that his family and especially his wife (Anupama) prayed for him which worked more than medicines for him. Unaware of Anuj and Anupama’s relationship, the doctor tells Anuj that it’s his wife Anupama’s love which brought him back alive.

Anuj and Anupama feel awkward. Anuj tells the doctor that Anupama is not his wife. Doctor apologizes and says that he only saw people in love praying this deeply for some patient. He asks them to not mind his words and goes to prepare Anuj’s discharge papers. Anuj asks Anupama what she wanted to say before anyone else interrupts or disturbs them. He asks Anupama to say what she wanted to say. Anupama asks should she say? Anupama starts speaking with “I” and stutters. She changes her words and scolds Anuj for fighting the goons alone. Anuj asks Anupama, who scolds a patient who just got conscious.

Anupama tells Anuj she will scold him for his stupidity of fighting the goons and putting his own life in danger. She tells Anuj that she got very scared. Anupama continues scolding Anuj and tells him that if from next time he repeats his stupidity, she will grind him like spices and make his pickle. Anuj tells Anupama that he doesn’t like pickles. Anupama stares at Anuj with anger. Anuj apologizes to Anupama telling her that he will not repeat his mistake. Anupama asks him to promise her. Anuj takes Anupama’s finger in his and replies “Pinky Promise”. Anupama starts leaving by saying that she is going to ask the doctor about discharge.

Anuj stops Anupama and asks her if she only wanted to scold him or wanted to say anything else too. Anupama leaves saying she just wanted to scold him. She feels nervous and shy outside the ward. Anuj calls a woman named Malvika and thinks why is she calling him a lot of times. He thinks about why Malvika called him on Baa and Bapuji’s anniversary and today too. On the other side, Vanraj is also seen talking to some woman named Malvika. Kavya overhears Vanraj’s conversation with Malvika and asks him who he was talking to? Vanraj tells Kavya that Malvika is his girlfriend. Kavya picks a flower pot in anger. Vanraj suddenly tells her that Malvika is not his girlfriend and also says to Kavya that she can break the flower pot if she wants to get scolded from Baa.

Kavya asks Vanraj why he initially said that Malvika is his girlfriend? Vanraj tells Kavya that she would doubt him in what he tells her. He tells Kavya that doubting has become her full time job. Kavya asks Vanraj, how would she not doubt him when he gave her divorce notice and spent the whole night with his over-friendly ex-wife. Vanraj asks Kavya if she thinks he gave his shoulder to Anupama to cry the whole night. He tells Kavya that she doesn’t need to be insecure from Anupama now as he himself asked Anupama to move on with Anuj. Vanraj leaves telling Kavya that even he moved on. Samar asks for the car keys from Paritosh.

Paritosh asks Samar if he is going to pick up Anuj? Samar tells Paritosh that he is going to drop GK at his home as Anuj just got discharged. Kinjal says she will send homemade food as Anuj needs to eat that only. Samar leaves, saying okay to Kinjal. Kinjal stops serving fruits to Paritosh, recalling their arguments. She tells Paritosh that they realize each other’s worth only after feeling fear of losing each other. Paritosh agrees to Kinjal and tells her that many times he forgets what he was upset about? Kinjal and Paritosh decide to give each other and their relationship another chance. Baa witnesses this and thanks god saying that now even children are becoming sensible.

On the other hand, Vanraj is seen driving Anuj and Anupama home. Anupama thanks Lord Krishna. Anuj thanks Vanraj for helping him. He tells Vanraj that he helped him like a good friend. Vanraj tells Anuj that he did it because he (Anuj) is special friend. He also tells Anuj that last night Anupama got very scared seeing his condition. Anupama feels Awkward. Anuj sees Anupama with love and says that someone who can’t even see an enemy in pain will obviously get scared seeing a friend in pain. Vanraj teases Anupama saying Anuj is her special friend. Anuj and GK have some emotional talk on their home’s main door.

Vanraj tells GK that Anuj is so handsome and may have got someone’s evil eye as all girls/women see and follow him. Anupama says it’s not her evil eye. Vanraj teases Anupama and says he was talking about girls/women who see and follow Anuj. GK asks Anupama to perform the ritual of taking off the evil from Anuj. Anupama performs the ritual and Anuj looks at her with love. She makes Anuj sit carefully on the sofa. Vanraj says he has an important meeting and takes a leave. Bapuji says the doctor has asked Anuj to take complete bed rest and not exert himself. Everyone makes Anuj lay on his bed for rest. Bapuji asks Anupama to stay at Anuj’s house and take care of him.

Everyone looks at Bapuji with shock. GK says he will handle everything. Bapuji asks GK to talk sense. Bapuji says he would have taken Anuj to Shah house but can’t because of some tension going on in between Vanraj and Kavya. He tells Anupama that she can do home and office work from Anuj’s home, but it’s important for her to stay and take care of Anuj. Anupama feels a little uncomfortable. Anuj sees this and says he can call a couple of nurses from the hospital to take care of him as he and GK have the habit of managing alone. Paritosh asks Anupama if he can volunteer in taking care of Anuj? Everyone looks at Paritosh with a mixture of shock and surprise.

Paritosh says its final that he and Anupama will stay the night at Anuj’s home as nobody can take care of Anuj better than Anupama. He further asks Anupama to come home with him to take clothes and food for Anuj. Anupama agrees and leaves with Paritosh. Anuj tells GK that Malvika called again. He also tells GK, Malvika messaged that she is in India only. GK asks why Malvika didn’t come to meet them. Anuj tells GK that Malvika only calls when she wants to talk. He also says that communication with Malvika is one way traffic. GK says it’s no old talk as Malvika doesn’t do anything normal. Anuj says Malvika knows about Anupama but not about him working with Anupama.

GK asks Anuj why he wants to hide anything from Malvika when he did nothing wrong. Anuj tells GK that he wants to tell everything to Malvika as she is his biggest responsibility, even bigger than work and love. On the other hand, Baa also gets to know about Anupama staying at Anuj’s home. Bapuji tells her that Paritosh himself volunteered to stay and take care of Anuj. He asks Baa why she is feeling angry or bad even when Vanraj doesn’t have any problem in Anupama and Paritosh’s stay with Anuj. Anupama is seen packing her clothes in her bag.

She recalls Bapuji and Vanraj asking her to let Anuj come in her heart. She also recalls Kinjal, Baa, Paritosh and Samar’s words about Anuj and her feelings for Anuj. Anupama smiles recalling everything. In the next episode, Anupama will get a heart printed on her hand. She will decide to express her feelings to Anuj. Anupama will reach Anuj’s home, see a photograph and get shocked.

Reviewed Rating for Anupama 13th December 2021 Written Update Malvika’s entry: 4/5 This rating is solely based on the opinion of the writer. You may post your own take on the show in the comment section below.