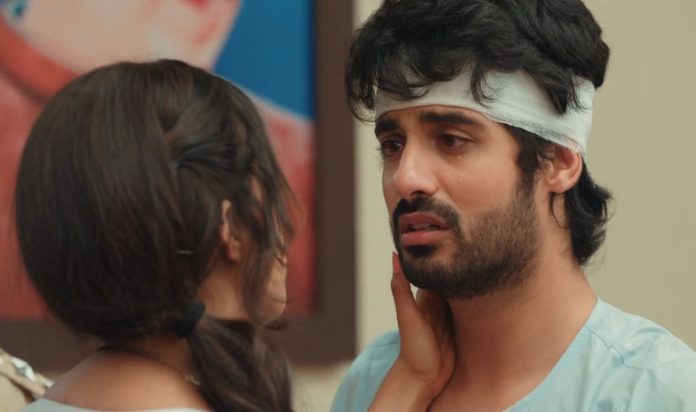 Yeh Hai Chahatein 13th December 2021 Written Update Remeet Flashback of Prisha continues. She tells Yuvraj that she doesn’t care even if she gets punished after giving birth to her baby. Nurse informs Yuvraj and Prisha about a fire outbreak in the hospital. Prisha and Yuvraj run outside for their lives. They come outside and cough. Yuvraj repeatedly asks Prisha if she is fine? Prisha asks how fire broke out in the hospital? Yuvraj jokingly tells Prisha that he lit the hospital to save her. He clears that he is just joking. Yuvraj says to Prisha that it is God’s signal that her past got burnt now and she should think about her future.

Prisha stops Yuvraj from taking her away. She tells Yuvraj that Rudra will save her from punishment. Yuvraj calls Prisha mad and jokes. He asks Prisha how Rudra will save her? Prisha refuses to go anywhere with Yuvraj. She says that she trusts Rudra that he will take care of her upcoming child after her death. Yuvraj tells Prisha that as per his legal knowledge her upcoming child will be sent to juvenile home and will be called a murderer’s child. He tells Pridha that she has no other option. Prisha says Rudra will save his upcoming child. Yuvraj says even if Rudra saves the child, he/she will have to get embarrassed of being a murderer’s child.

Yuvraj asks Prisha to understand and take the advantage of the chance she is getting to get saved and to save her child. Prisha asks what about Rudra? Yuvraj says even after Rudra gets to know about her being alive, he will have to live without her after her death. Prisha says it’s wrong as Rudra should be aware of his child. Yuvraj gets angry and asks Prisha, if she fought for Mahima’s son Saaransh, why can’t she fight for her own child? Yuvraj tells Prisha the options she has. He tells her that her first option is to live with Rudra and give a life of embarrassment to her child and secondly, she can think of herself and her upcoming child for once and give her child a respectable life.

Yuvraj tells Prisha that he can call Rudra if she wants. Prisha stops Yuvraj from calling Rudra. She asks Yuvraj, where will she live? Yuvraj tells Prisha that she will live with him and he will give her child his name. Prisha tells Yuvraj that she agrees to his plan of escaping but will not give her child his name. She says she will handle and manage her child independently. Yuvraj smirks thinking that he will soon make Prisha take his help and name her child. He recalls causing fire in the hospital using kerosene and opening cylinders. Yuvraj thinks he already fooled Prisha with a Juvenile and fire outbreak lie. He also thinks that he will soon find Prisha and make her his. He shows his fake acceptance towards Prisha’s decision.

Prisha’s flashback ends. She thinks her everything burnt that night. Prisha thinks everything went dark for her but Ruhi (her and Rudra’s child) came as a light. She thinks about the meaning of life, where she and Rudra are not together. Prisha also thinks that Rudra doesn’t know that she is alive and is living with his daughter Ruhi. She thinks she has only had this regret for the last 5 years. Prisha further thinks where and how Rudra would be without her. Rudra is seen drinking continuously. Bunty asks Rudra to stop drinking this much. Rudra gets emotional and says nothing has happened to him since the last 5 years. He tells Bunty that after Prisha only Alcohol can help him to bear the separation pain. Rudra requests Bunty to let him drink.

Bunty snatches Rudra’s alcohol but the latter walks away with alcohol. Vejanti comes there and handles Rudra. She tells Bunty that she will handle Rudra as she has only been handling him since the last 5 years being his wife. She takes Rudra. Prisha on the other side wishes for Rudra and Saaransh to move on from her. Vejanti makes Rudra lie on his bed and moves to open his shoe laces but Rudra scolds her in return. A servant brings food as asked by Vejanti. Rudra sees it and throws the food from the servant’s hand on the floor. He asks Vejanti to not act like his wife as he married her only for Saaransh. Rudra further asks Vejanti to not even think of taking Prisha’s place in his life. He continuously scolds Vejanti.

Vejanti asks Rudra why he always scolds her. Rudra again scolds her and asks her to not try doing anything for him even though he will be dying. He tells her she can’t take Prisha’s place in his life and asks her to leave his room. Rudra says he wants to spend time with his Prisha and throws Vejanti out of his room. Saaransh asks Vejanti why she always tries taking care of Rudra and cries for him. He tells Vejnati that Rudra can’t love anyone else like he loves Prisha, not even her. Saaransh tells Vejanti it will be good for her to accept the truth. Vejanti tells Saaransh that she knows she can’t take Prisha’s place in Rudra’s life. She continues telling Saaransh that what pains her more is that she failed to become his (Saaransh’s) mother. Vejanti tells Saaransh that he didn’t accept her as his mother even after her many trials.

Saaransh doesn’t let Vejanti touch him and leaves. On the other side, Prisha is seen treating patients in some clinic in Rohtak district’s village. A woman named Veena Maasi brings food for Prisha. Prisha thanks Veena for bringing food for her. Veena tells Prisha that she is thankful to her that she came, opened the closed clinic and is treating village people for free. Prisha says she can’t take fees from people who don’t have money for their treatment.

Veena asks Prisha how she will handle all her expenses this way. Prisha says God will help her. Veena asks Prisha if she doesn’t have a family who could help her. Prisha recalls the time she spent with Srinivasans and Khuranas. She thinks that she is now dead for her family and can’t even reveal her real name because of her past. Prisha also thinks that she also changed her name from Prisha to Priya. She further thinks she came to a small village to live and changed her name so that nobody could find her.

In the next episode, Bunty will inform Rudra about the concert he booked for him in Rohtak. On the other hand, Ruhi will also inform Prisha that she will be late the next day as she wants to attend Rudra’s concert which is going to be held in their village Rohtak. Prisha will get shocked hearing this. Rudra refused to perform in Rohtak feeling that the concert there would not be good. Sharda will tell Rudra that she read his future prediction in the newspaper which says that something new will be coming in his life the next day which will change his whole life. Prisha will think that she will surely attend Rudra’s concert as fate may want to give her and Rudra another chance.

Reviewed Rating for Yeh Hai Chahatein 13th December 2021 Written Update Remeet: 4/5 This rating is solely based on the opinion of the writer. You may post your own take on the show in the comment section below.