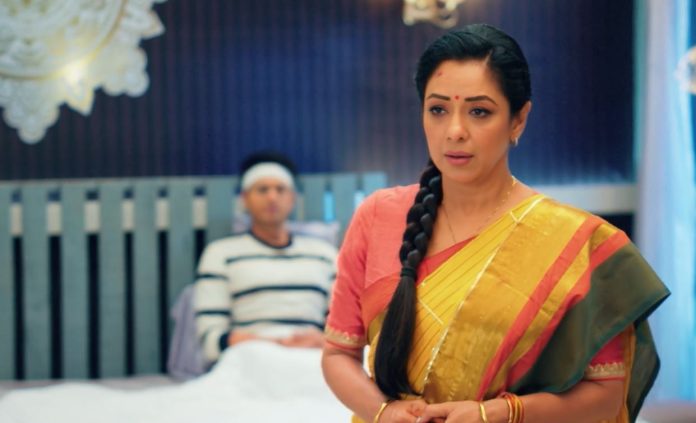 Anupama 14th December 2021 Written Update Shocker for Anu Pakhi asks about Anuj’s condition from Anupama. Anupama replies that Anuj is fine and has returned home. Pakhi asks Anupama if she got scared? Anupama says yes, she got scared. Pakhi tells Anupama that it happens as when her best friend got wounded, she (Pakhi) was the one who cried more than the wounded person. She tells Anupama that Anuj is also her best friend. Anupama replies yes and asks Pakhi if she believes that mothers can also have friends. Pakhi says yes and asks Anupama why she is asking all this when she just said that Anuj is her best friend. Anupama says she just asked randomly.

Bapuji comes there and asks Pakhi to let him talk to Anupama too. Pakhi leaves the call asking Anupama to talk to Bapuji. Bapuji asks Anupama if she is trying to know about her family’s opinion before thinking about herself. Anupama replies yes and tells Bapuji that everyone asks her to think about herself too. She continues saying that a mother’s heart is very big, which contains both herself and her child. Anupama also says that for people, mother and child are two different people but for a mother her child is a part of her only. Bapuji tells Anupama that Samar and he are already cheerleaders of her team and now Paritosh is also supporting her.

He tells Anupama that Baa didn’t blasted when he told her about her (Anupama’s) stay at Anuj’s home. Anupama asks really? Bapuji replies yes and tells Anupama that she doesn’t need to think about others opinions or permission for making any decision about herself. He further asks Anupama to move on confidently as Devika asked her to. Bapuji explains to Anupama that people will talk a lot about her and Anuj even if they will live separately in Kashmir and Kanyakumari for example. He asks her to leave thinking about others and do what she feels is right. Bapuji continues explaining to Anupama that Anuj needs someone whom he can say is his own. He explains to Anupama that GK cannot always work for Anuj as he is growing old.

Bapuji further explains to Anupama that a nurse can take care of Anuj but care from someone known is a different feeling. He tells Anupama that Anuj needs her even if he hides about it from her. Bapuji tells Anupama that she will find it easy to hear her heart, if she stays with Anuj. He explains to Anupama that wrong intentions can come in a person’s mind even if they live at a long distance. He continues explaining that the wrong intentions can’t come in a person’s mind even if they live together. He asks to go and stay at Anuj’s house with a peaceful mind. They greet each other and disconnect the call. Anupama thanks Lord Krishna and says that she always wanted her whole family to support her in something and this is happening today. She again thanks Lord Krishna.

Anupama says she understood that no one’s life is guaranteed and a person should not take much time to reveal his/her feelings. She thinks to reveal to Anuj that she is ready to think about his and her relationship. She thinks to reveal that she gave permission to her mind and heart to move ahead in life and give Anuj a chance in her life. On the other side, GK says to Anuj that they will handle Malvika when she arrives. He makes Anuj smile and shy by saying that Anupama is coming to stay with him and take care of him. In a teasing manner, he asks Anuj if he is feeling well now? Anuj asks GK to not tease him. GK says finally their dream is going to be fulfilled in this way. Anuj says he also saw a dream to be staying with Anupama but is still feeling guilty about it.

GK says to Anuj that this is why he is expecting his and Anuj’s dream of Anupama staying with Anuj to come true and Lord Krishna is fulfilling Anuj’s this dream. Anuj says that even Lord Krishna knows that his dream can never come true and is thus fulfilling it in this manner. Anuj says he thought of beating the goons by finding them but now wants to thank them. Anuj says that these two-three days happiness is bigger than his whole life’s happiness. GK says to Anuj that maybe his temporary happiness becomes permanent. Anuj refuses to believe it. GK says it can happen, if he and Anupama stay together. Anuj says he and Anupama cannot be alone till Paritosh and he are near them. GK says he and Paritosh will never always sit near him as they have their own life too.

Anuj requests GK to not make Anupama awkward with his nonsense. GK says he knows what to do. Anuj asks GK if Anupama told him when she is coming? GK teases him. On the other hand, Anupama is seen behaving like a 90’s teenager. She feels happy and gets a heart made on her wrist. She imagines Anuj in between the road making her wear her sandals. Her imagination ends and she gets shy. Anupama sees herself in a mirror and tidies her hair and saree. She takes rounds while walking on the road. Anupama reaches outside Anuj’s house and thinks not to disturb Anuj. She makes a call to Gk but finds the door opened. Anupama enters the house and sees Anuj sleeping. She finds Anuj’s burnt photograph under her feet and gets confused.

Many photographs fly to Anupama. Anuj sees this and gets scared and shocked. He grabs all the photographs in a hurry. GK comes there and gets worried about Anupama’s opinion on what he and Anuj are hiding from her. Anupama asks Anuj to not get worried as she won’t question him. She tells Anuj that she understands that he may have some reason behind hiding something. Anuj thinks he will tell Anupama about what he is hiding from her at the right time. Anupama scolds Anuj for being careless about his health and handles him. On the other side, Vanraj is seen talking to Malvika. He disconnects the call and thinks that next morning will be fully new. He further thanks Malvika by thinking that he will give his family an unexpected news the next day.

Kavya thinks about Malvika and how she changed Vanraj’s body language with her words. Back at Anuj’s house, Anuj and Anupama feel awkward and leave each other’s hands. Anuj sees the heart shaped tattoo on Anupama’s wrist. He asks Anupama about it. She makes a children’s excuse and Anuj praises her tattoo. Anupama helps Anuj sit on his bed and scolds him for laughing and being careless about his health. Anuj tells Anupama that he is smiling thinking that she finally came into his life. Anuj says he meant that she came to his house, which is his life. At Shah house, Kinjal gives coffee to Paritosh. Paritosh tells her that he applied in two companies which they shortlisted. Kinjal hugs him and tells him that she is proud of him.

Paritosh says he hasn’t done anything till now. Kinjal tells Paritosh that Anupama says that trying is in a person’s hand and rest god will handle. Paritosh doesn’t show confidence in getting a job. In a joking manner Samar says to Paritosh that a person who can work with Rakhi Dave can get a job anywhere. Kinjal agrees with Samar’s words. Baa asks Paritosh to go and help Anupama with Anuj. Everybody else in Shah house seems busy and Paritosh assures Baa that he will go. Samar understands that Baa is worried about Anuj and Anupama being together. On the other hand, Anupama gives Anuj his medicines. Anuj thanks and asks Anupama to stay in her room that GK prepared for her. He also tells Anupama that she can return to her home if she is feeling awkward in his home.

Anupama tells Anuj that she doesn’t want to go anywhere from his house. Anuj feels good. Anupama smiles seeing Anuj. In the next episode, Anuj and Anupama will together be seen playing with a pillow on the bed. Next, Anupama will be seen telling Bapuji that she is ready to move on with Anuj. She will also tell Bapuji about her fear of becoming the Anupama who used to be dependent. She will hear Anuj telling someone “that he missed her a lot and loves her so much”. Anupama will take a back step from Anuj.

Reviewed Rating for Anupama 14th December 2021 Written Update News for Anu: 3/5 This rating is solely based on the opinion of the writer. You may post your own take on the show in the comment section below.